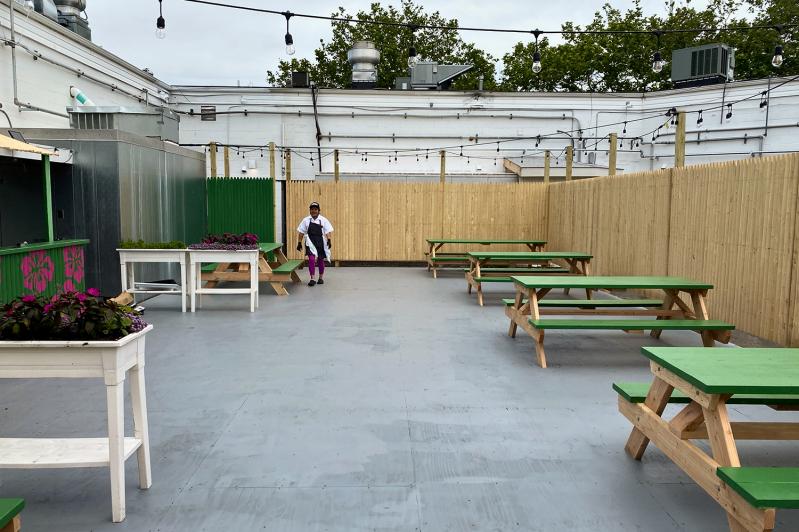 After getting permission for outdoor dining from state and local officials, East End restaurants are finding creative ways to make room for as many customers as possible this summer.

At Fresno in East Hampton Village, an asphalt parking lot has been converted into an open-air beer garden that seats 75.

The brick courtyard in front of Rowdy Hall in the village, which previously had 16 seats for restaurant dining, is now set up for 36.

The owners of K Pasa in Sag Harbor are transforming an unsightly alleyway into a serene deck for their customers.

And Moby's, the restaurant that had operated for several years at 341 Pantigo Road in East Hampton, has returned to its old space to take advantage of a nearly one-acre backyard, which features a new patio, a fire pit, a bocce court, and a Ping-Pong table.

"It's a prime space for the environment we're in," said Lincoln Pilcher, a co-owner of Moby's, which opened for outdoor dining on Saturday. The backyard is large enough to accommodate 50 people at tables that are 20 feet apart, he said. That's more than three times the state's requirement for social distancing. As the summer progresses, Mr. Pilcher hopes to accommodate 100, but "we're trying to be cautious and make sure we can keep it going," he said. To make use of the indoor space, the restaurant will soon open a market offering pasta sauces, cheeses, and other items, he said.

"It's all legit and legal believe it or not," said Michael Nolan, a co-owner of Fresno, as he looked at an arrangement of picnic and bistro tables in the restaurant's newly spruced-up parking lot. After on-site dining was shut down in March, Fresno transitioned into offering takeout food and did a brisk business thanks to its regular customers. The owners received a federal loan that allowed them to retain a majority of the restaurant's staff, Mr. Nolan said. Now both employees and guests are eager to return. "It is so good to hear forks clinking on china," he said. "And people are so happy to be out." One of the village's requirements for outdoor dining is that restaurants must have a plan for inclement weather because customers will not be allowed to gather indoors. The picnic tables at Fresno have umbrellas, which will protect diners from a light rain, said Mr. Nolan, but, in the case of a downpour, the plan will be to "wrap stuff up to go."

Lulu's Kitchen and Bar in Sag Harbor has a back patio for outdoor dining, and it is also asking the village to increase the amount of seating allowed on the Main Street sidewalk, said Joshua Fishbein, the general manager. Instead of three tables of two, the restaurant is hoping to provide two tables of six. Looking ahead to the time when indoor dining can begin again, Mr. Fishbein said, the restaurant has already ordered custom-made room dividers that can be wheeled around to separate parties.

The deck being built at K Pasa will have seven tables, most of which will accommodate six people, and one that will seat 10, the largest party allowed by the state. "We need the code enforcer to sign off on it, and we'll start serving as soon as he gives the okay," said Jesse Matsuoka, a co-owner. Although the permit for new outdoor dining areas in Sag Harbor Village only lasts through Nov. 1, Mr. Matsuoka said he's hopeful the deck can become a permanent fixture after "the mayor sees how nice it is, and how many people respond positively to it."

Mark Smith, the co-owner of Rowdy Hall, said he hopes East Hampton Village officials recognize that outdoor dining can be an asset and bring a resurgence of energy to the commercial district without being disruptive. "That could be one good thing to come out of this pandemic," he said. Mr. Smith is also an owner of Nick and Toni's, just outside village limits, Coche Comedor and La Fondita in Amagansett, and Townline BBQ in Sagaponack.

The crisis has been "very demanding financially, physically, and emotionally" for those in the restaurant business, he said, and outdoor dining will offer a small first step to recouping some of the losses from the economic shutdown.

When phase three of reopening begins, one hopes on Wednesday, restaurants will be permitted to have indoor dining at 50-percent capacity. But when the requirement to have tables six feet apart is factored in, Mr. Smith said, smaller restaurants such as Rowdy Hall will ultimately be able to be only at 25 or 30 percent capacity. "That's why this is a blessing," he said, gesturing to the extra tables in the courtyard.