Local booksellers carve a special niche in the market 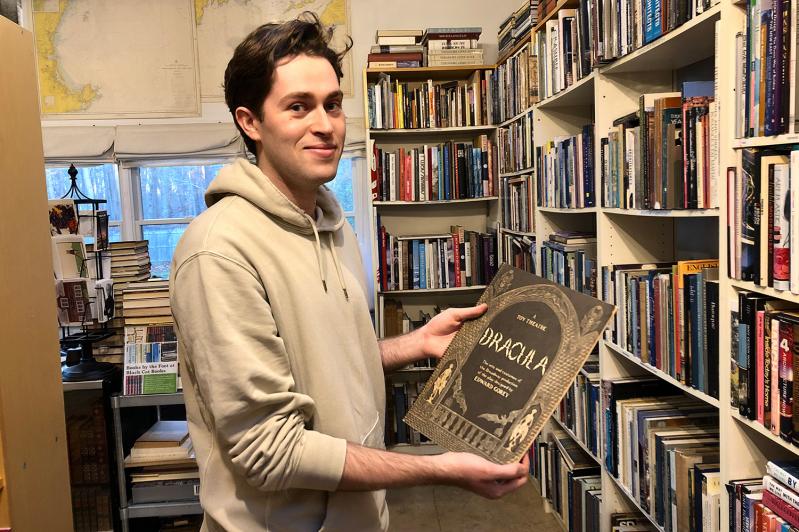 At Black Cat Books on Shelter Island, the store manager, Lucas Dupree, held one of his personal favorites, a signed copy of “Dracula: A Toy Theatre,” featuring drawings of the sets and costumes for a Broadway production designed by Edward Gorey.
Carissa Katz
By Judy D’Mello

In 1996 Dawn Hedberg opened Black Cat Books in Sag Harbor, a used bookstore filled with literary treasures, from vintage collectibles to signed first editions. In the quarter of a century since, a lot has happened in the book world.

For a start, her store is now on Shelter Island, where she moved in 2007 in order to escape Sag Harbor’s rising rents. But, even before that, Amazon came along in the mid-1990s and disrupted the new books market forever. Then, in 1997, Alibris, the antiquarian book company, shook up the trade by going online to offer a bridge between old books and new technology. And after Amazon unleashed the Kindle in 2007, the outlook for the book business was bleak.

Borders, the nationwide bookstore chain, went bankrupt in 2011. Barnes and Noble closed about 150 stores between 2007 and 2016. Independent bookstores were dwindling. Secondhand bookstores were shuttering rapidly, while charity shops were no longer accepting used titles. Physical books, it seemed, were worth little more than the paper on which they were printed.

Yet, ironically, literature seems to be better off now. Used book sellers like Ms. Hedberg tapped the internet’s potential for buying and selling and took their businesses online. By doing so, they began redirecting the world’s flow of used books from extinction (and landfills) to readers who truly care for and appreciate them. In essence, the used book seller turned into a sort of antiques dealer by putting literary gems on the internet, where those most interested can easily find them. (The Black Cat website includes a signed, first printing of the United States edition of Umberto Eco’s “The Name of the Rose” for $350, for example.)

An impressive selection of rare and used books can also be found at Sag Harbor Books and its sister shop, Southampton Books.

“We have several thousand collectible books in our inventory between both stores,” said Greg Harris, co-owner of the shops with Daniel Hirsch. Wandering between the shelves and enclosed bookcases of the collectibles in Sag Harbor reveals a trove of original gems and a few trophy books, like a signed first edition of “A Streetcar Named Desire” (1947) by Tennessee Williams, with a dedication to a member of the original Broadway cast. Price: $30,000. There’s also a “scarce copy” of a first edition of Raymond Chandler’s “The Big Sleep,” from 1939, and a 1920s first edition of “The Voyage Out” by Virginia Woolf for $12,500.

But it’s not all trophy books. A browse through the Sag Harbor store and the shops’ website shows an array of well-known titles going for just hundreds of dollars and even less.

“Books in fine condition are always an investment as the best books in the best condition retain their value and increase over time,” said Mr. Harris. “We encourage customers to browse in-store, or on our website, where you can see the range of prices and titles available.”

The internet, it seems, has turned a once local — almost parochial — trade into a global business.

“Honestly, Amazon and eBay offered an amazing opportunity for us to offer our books beyond our ZIP code,” Ms. Hedberg of Black Cat Books said. “It helped keep the store profitable year round when the retail sales out here are so seasonal.”

Stepping into the Black Cat store is like receiving literary nourishment. Although it specializes in antiquarian and first-edition art books, you’re just as likely to find that old Penguin novel for a few dollars, and the children’s section is expansive. The shop is crammed but orderly, and spending time to browse through the many rooms and each meticulously detailed section is encouraged. There’s always someone on hand to help — like, “my invaluable store manager, Lucas Dupree,” said Ms. Hedberg — but the goal is clearly to allow a visitor to linger and savor the store’s cache of literary curiosities.

While there are no official statistics for the size of the used book market, a 2018 survey by Statista found that in both the United Kingdom and the U.S., more than 50 percent of book purchases were of secondhand titles. So, does this mean that the future is bright for used books stores?

Not quite, said Ms. Hedberg. “You’ve got to be half crazy to be in this business. . . . I don’t know anybody that’s been in it for whom it wasn’t a labor of love. To curate a store, to edit it, to go there every day and open it up. And sometimes, in the middle of winter, you sit there, and you’re lucky if anybody comes in. It’s not easy, especially in an area where you’re talking about paying rents of $10,000 a month and more for tiny spaces in a very seasonal market. . . . I think the future of bookselling is probably exclusively online.”

The e-commerce potential of the secondhand market was spotted by Amazon in 2008, when it bought AbeBooks, a huge Canadian marketplace for used books. AbeBooks exists now exclusively online, simply matching buyers and sellers without handling any of the books themselves. With Amazon more recently focusing on the brick-and-mortar bookstore business, the signs are encouraging that physical books won’t disappear.

Is this good news for Ms. Hedberg?

“Honestly, we joke all the time that we could just sell online and rent the bookstore building out and make about the same income,” she said of her business, which is housed in a separate building adjacent to her house. “But the store is really special to me. It’s like having another child. Sometimes you feel swallowed by the day-to-day stress but ultimately it’s something you’re so proud of and watching it grow over all these years has been such a joy.”

Maryann Calendrille, a writer who has owned Canio’s Books in Sag Harbor since 1999 with her partner, Kathryn Szoka, a photographer, would tend to agree. The shop stocks old and new books — “about 50-50,” she said — and has a small offering of collectibles and first editions, as well as leatherbound treasures. Canio’s also has an online bookstore, with “a discriminating, eclectic selection” according to its website. But, there, it’s really all about the seduction of meandering through the store and rooting through its shelves, a general mix of literature and nonfiction, where you’re bound to come across a few valuables.

Hoedown on the Farm, Cocktails in the Garden
Main Beach Free Concerts in Final Weeks
Services and Counseling After Death of Popular Teacher Assistant
END_OF_DOCUMENT_TOKEN_TO_BE_REPLACED