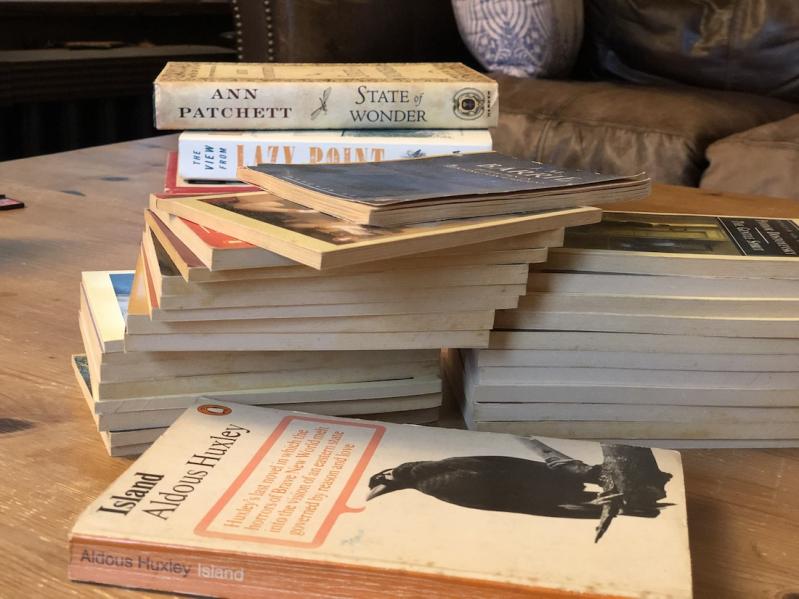 "In the gray-haired league we are all a little more challenged by technology," said a woman who is part of two book groups that have moved online.
Carissa Katz
By Bella Lewis

The course of true love never did run smooth: Book lovers with devoted book clubs are doing everything in their power, even mastering new technology, to keep up with meetings in the age of coronavirus. What Zoom lacks in dimension, dimensional conversation makes up for.

"We stay on task. This is not food and drink and nibbles and maybe the book," said Joanne Canary, who has been a part of the Amagansett Library's book club, as well as one she organizes herself, for six years.

"We decided we'd had enough of World War II stories. More dramatic books are not usually a barrel of laughs, so we're looking for well-written books with humor in them," said Ms. Canary of her current reading aspirations. She mentioned Richard Russo's book "Straight Man."

"Most of us are of a certain age and have income enough to have leisure time, but in the gray-haired league we are all a little more challenged by technology," Ms. Canary said. Initially it was her responsibility to make the invitations for Zoom, "but that was a level of complexity I didn't enjoy."

Lauren Nichols, the Amagansett Library director, soon took over the responsibility and made life easier. "It was a huge relief! That was making me really uncomfortable about the book meeting and added to the tension. You get performance anxiety because you want the book to be well presented and received, and that's good, but Zoom on top of that is not good."

Thanks to Zoom, however, members of the Amagansett Library book club who headed to Delaware and New York City for quarantine have been able to continue attending meetings. "An unexpected pro," said Ms. Canary.

"The Zooming thing, I like it. I really do and I hope in many ways a lot of the many things that I used to do in person continue on Zoom because you don't have to drive, show up, or get dressed," said Noreen Bradley, who is part of both Amagansett and East Hampton Library book clubs. "Just put on a nice T-shirt so you don't look terrible and I find it's easy to have conversations through Zoom."

Ms. Bradley shared a clever travel tip for when the world reopens, which she learned from fellow book group members who live on the East End only in winter and have stayed up to speed with the club through Zoom this summer. "They told us when they are traveling, six weeks before they leave, they find a book club where they are going, Ireland for example. They read the book and show up when they get to Ireland and find it's a great way to make contact with local folks, but also interesting to discuss their perspectives on books, which can be somewhat different from American ones."

Among the book clubs still going strong virtually are Steven Spataro's Mystery Book Club and Sci-Fi Book Club at the East Hampton Library. Mr. Spataro said that since putting the meeting sign-up on Eventbrite, the club has become an international one, with new regulars who join from as far away as Devon, England, and Vancouver, British Columbia, plus all different states. "The person that Zooms in from England, it's 11 p.m. there! He's looking forward to it," Mr. Spataro said.

In house, the sci-fi group might sometimes have four or five people, "but we had 12 people online," he said, and the conversation still ran smoothly.

"Everyone is very polite." Mr. Spataro has also been able to organize guest speakers over Zoom.

His sci-fi picks for this summer have included Clifford Simak's "The Way Station." "They loved it. The reason why I picked that was because it's going to be a Netflix series. We did 'Cold Storage' by David Koepp for August and we're doing 'Stranger in a Strange Land' by Robert Heinlein for September."

Even when things go back to "normal," Mr. Spataro plans to use Zoom at in-house meetings for members who cannot make it to the library. He is thinking that with a very small group spaced six feet apart, the book club might resume in-house meetings at the end of September or beginning of October; however, he is waiting for more insight on the issue.

Jill Sollazzo, who runs the Saturday popular fiction book group, explained in an email that she had mixed attendance when she picked things back up online in June. "My first group, we had a very lively discussion," and also with another U.K. resident in attendance, she said. "My second go-around we ended up not having anyone join us. I'm looking to do another discussion in September and hopefully it might be a mix of virtual and in person utilizing our outdoor tent space. I think we're starting to see a lot of Zoom and online program fatigue, which could account for lower attendance."

At BookHampton, Eve Karlin, a bookseller who runs the book group, reported that not a single meeting had been missed. "I think it's worthwhile. I think people need the connection now more than ever. We've been really lucky in that we've had authors participate sharing their books." Among the group's assortment of recent literature, local lore was featured in Marian Lindberg's "Scandal on Plum Island."

Ms. Karlin notes that in the winter, the Maidstone Inn used to host the club. "That was lovely," and an easily missed thing about in-person meetings, she admitted.

A fiction writers support group that began at the John Jermain Library and is moderated by Bobbie Cohen is also taking place over Zoom, which is good for those who attend after work or live in East Quogue, she noted. Eric Cohen, her husband and a member of the group, acknowledged that "it's always been very affirming getting together once a week."

While intellectual conversation can happen just about anywhere, Ms. Bradley sheepishly pointed out that the pre-book club cocktail with fellow members is absolutely irreplaceable. "I miss that the most in person, I think," she laughed.