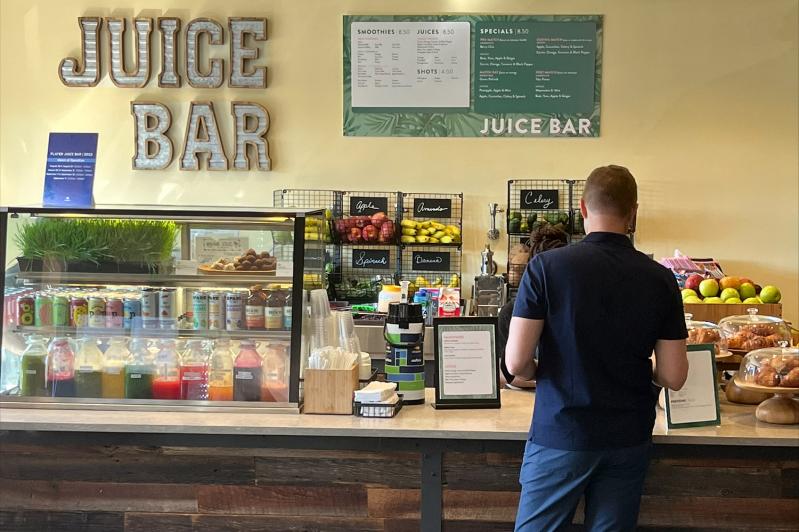 Professional tennis players at the U.S. Open have a wide variety of carefully selected food options to choose from.
Jon M. Diat
By Jon M. Diat

Serena Williams certainly made a lot of headlines last week with her performance and retirement announcement at the U.S. Tennis Open. (She did seemingly leave the door slightly ajar on hanging up her tennis racket in her post-match comments.) Turning 41 later this month, Williams clearly still has what it takes to remain competitive.

But beyond proper fitness training, including stretching exercises, recovery techniques, and cooling down after a match, professional tennis players like Williams are careful as to what they eat so they can perform at peak level. Equally important is staying hydrated before, during, and after a match.

But everyone is different, so it was interesting to learn at the tournament about the eating and nutritional habits of the professionals, as well as the food offered to players in the dining areas near the locker rooms within Arthur Ashe Stadium in Queens.

While the media’s dining room was loaded with high-caloric foods like fried chicken wings, french fries, doughnuts, and cakes, as well as beer and wine (all foods required for a finely tuned sportswriter), it was a different story for the players, who were availed of prepared proteins, carbohydrates, fruits (especially bananas), nuts, protein shakes and fruit slushies, energy gels, and the ever-popular assortment of sushi.

Yes, Williams, like many professionals of the tennis court, is an ardent aficionado of sushi, but it is usually of the vegan kind (she adheres mainly to a plant-based diet). But the 23-time Grand Slam winner does admit to a fond weakness for chocolate molten lava cake when she allows herself a treat.

Back to sushi, few reign more supreme for raw fish than Andy Murray of Scotland, a three-time Grand Slam winner. A lover of the Japanese treat (spicy tuna rolls are a particular favorite), Murray used to consume upward of 50 portions in one sitting.

In recent years, however, he has cut back and altered his diet to include a mixture of chicken, meat, rice, and pasta. A typical breakfast usually includes yogurt and a protein shake (bacon and eggs do make an appearance on occasion) to go along with about one and a half gallons of water a day. Murray also avoids processed foods, sugar, and alcohol, but chocolate is a weakness he will indulge in at times.

But not everyone sticks to a strict dietary regimen at the U.S. Open. While interviewing Anastasija Sevastova of Latvia three years ago, before she lost to Williams in the semifinals, she admitted that she will deviate from her normal course of nutrition. “This morning I had a bacon, egg, and cheese on roll,” she sheepishly admitted with a smile. “It was really good.”

“Understanding of the nutrition industry has grown, and athletes have become more specific,” said Paul Annacone, a coach and former East Hamptoner. “But everyone is a bit different.”

Annacone knows what it takes to win. In his 14 years on the tour, he ultimately won three A.T.P. titles, reaching a career-high ranking of 12th in the world in singles and was one of the world’s top doubles players.

But Annacone is probably better known now as the coach who helped shape the games of Pete Sampras and Roger Federer. Under his guidance, Sampras won nine of his 14 major titles, and Federer reclaimed the world’s top ranking and won Wimbledon in 2012. Today, Annacone is a commentator on the Tennis Channel and coaches Taylor Fritz, a 24-year-old from the San Diego area who is ranked 12th in the world.

“Roger was disciplined and smart with what he ate,” recalled Annacone. “Pete was old-school carbs and protein before he played, but wasn’t very specific. Taylor is aware, but not incredibly specific either. But his physio helps guide him periodically.”

At the other end of the spectrum, Annacone noted that Novak Djokovic adheres to a very strict gluten-free diet.

Annacone added that hydration is key too. “Players are really getting involved with the science to understand how best to maximize their performances,” he added.

Iga Swiatek of Poland, the top-ranked female player in the world at the moment, discussed in a recent video her day-to-day tour life with her fans, showcasing her typical menu before an evening match -- “some lettuce and broccoli, some seeds, cucumber, cottage cheese” for lunch, after which she has a midday snack, usually a tropical smoothie drink. Her pre-match meals, she said, were typically chicken and rice, something light so she can perform at her best.

Her fellow countryman Hubert Hurkacz, the 10th-ranked player in the world, follows a strict vegan diet. “Most of the time I eat some rice and vegetables before my matches,” he said.

It’s a good thing Hurkacz is not a sportswriter.