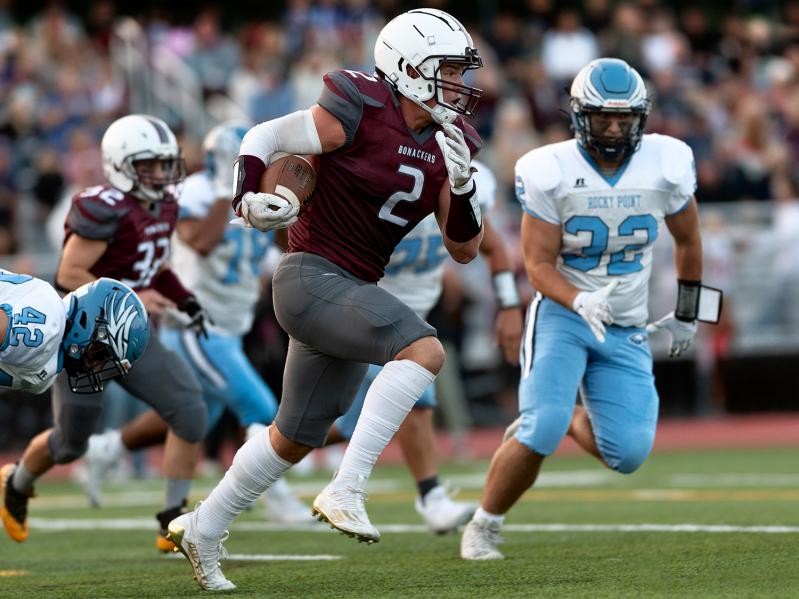 Finn Byrnes gave the filled homecoming stands something to cheer about Saturday evening as he took off on a 99-yard touchdown run on East Hampton’s first play from scrimmage.
Craig Macnaughton
By Jack Graves

The homecoming football game was all you’d want it to be, for a while: The stands were packed, the mood was giddy, the lights were on, the a cappella quartet — Dakota Quackenbush, Sienna Link-Morse, Kayla Lester, and Silas Jones — that sang the national anthem was impressive, and East Hampton’s players were pumped up.

Rocky Point, which proved in the end to be the better team, drove all the way to East Hampton’s goal line on its first possession, but there things came to a halt as Will Darrell emerged from a pile of bodies with the ball, a fumble recovery that Finn Byrnes, Bonac’s chief running back, translated on the next play into an electrifying 99-yard touchdown, a turn of events that had Bonac partisans roaring and cast a pall — however momentary — on the visitors’ side of the field.

You might say it doesn’t get any better than that. And it didn’t. But the bad news wasn’t to arrive until the second half, the first having wound up tied at 14-14, owing to a 35-yard Rocky Point touchdown pass to Anthony Viggiano midway through the first quarter, and, in the second, to a 23-yard touchdown run by Bonac’s quarterback, Charlie Corwin, and a 32-yard rushing touchdown by the visitors’ Liam Reisinger. Aryan Chugh and Jeremy Graham, who alternated with A.J. Aschettino at quarterback for the visitors, tacked on the extra-point kicks.

During halftime, East Hampton’s band played, that morning’s Hall of Fame inductees in attendance were feted, and the senior class’s king (Jack Dickinson) and queen (Gabby Miller) were crowned.

And then things began to go south. A fumble recovery early in the third quarter at the Eagles’ 22-yard line that snuffed an East Hampton drive that had begun with a kickoff return into Rocky Point territory by Mikhail Feaster, led to the visitors’ third score, on a 27-yard keeper by Graham after he’d faked a handoff. And before the quarter was over, the visitors had scored twice more, an interception of a Corwin pass for Jason Lester setting up a 41-yard touchdown scamper by Reisinger, and another fumble recovery, at the Bonac 30, keying the visitors’ fifth TD, a 4-yard first-and-goal rush into East Hampton’s end zone.

The Eagles went up 41-14 when with three and a half minutes left to play Graham sped 35 yards into the home team’s end zone, though East Hampton avoided a second-half shutout — and gave Bonac’s fans something, at long last, to cheer about — when, with 21 seconds left, Corwin connected with a diving Darrell just inside Rocky Point’s goal line.

“There were a lot of good things,” Joe McKee, East Hampton’s coach, said afterward. “We moved the ball, but we shot ourselves in the foot with that fumble and interception in the second half, and we had trouble stopping the run.”

East Hampton, whose record is 1-1, is to play tomorrow at Westhampton Beach at 6 p.m., and at Hauppauge the next week, “both of them good football teams,” said McKee. “We’ve got our work cut out for us.”