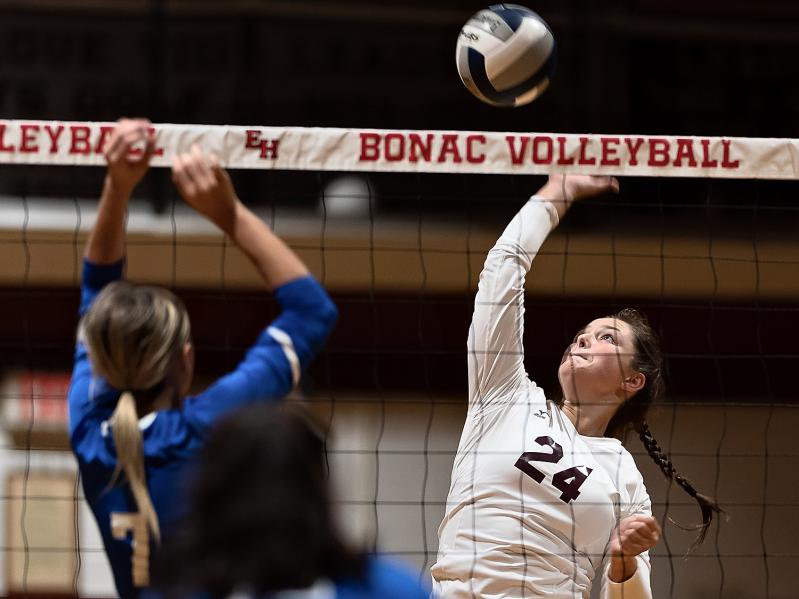 Caroline DiSunno, a senior outside hitter, and her East Hampton High girls volleyball teammates won in four over Comsewogue in their homecoming game Saturday. Going into this week, the team, coached by Alex Choi, was 3-2 in league play.
Craig Macnaughton
By Jack Graves

All of the above were winners, while the swimming team, making its debut at the Y.M.C.A. East Hampton RECenter on Sept. 13, was tied, 85-85, by Connetquot, a nonleague opponent, owing to the fact that the visitors won the last event, the 400-yard freestyle relay.

Among East Hampton’s winners that day were Ava Castillo in the 200 individual medley and the 100 butterfly, Cami Hatch in the 100 freestyle and 100 backstroke, Jane Brierley in the 50 free and 100 breaststroke, and the 200 medley relay team of Hatch, Brierley, Castillo, and Carolina Condon.

Craig Brierley, the coach, said “all three relay teams qualified for the county meet, and Hatch, Brierley, Castillo, and Lily Griffin turned in county-qualifying times in individual events. . . . It was a well-earned tie for both teams.”

Sydney Rawsen, an East Hampton junior, was named swimmer of the meet by the captains for having pared almost 5 seconds from her previous best in the 100 butterfly, and for the leg she swam for the B team in the 400 free relay.

Samantha James’s field hockey team, minus its center back, Chloe Coleman, was cruising along at 3-0 entering the fourth quarter of Friday’s game here with Sayville, but the visitors, thanks to goals by Loghan McNamara, came roaring back in the final minutes to pare East Hampton’s margin to 1. A number of passes across the field by defenders that the Golden Flashes intercepted added to the anxiety, much as an intercepted flat pass would in football, though Caeleigh Schuster, Bonac’s tall and agile freshman goalie, who finished with 14 saves, continued to be up to the challenge. Thus East Hampton held on for a 3-2 win.

Emma McGrory, the fleet right wing, again figured in all of East Hampton’s scores, assisting Toby Allen on the ice breaker at the end of the first quarter, deflecting into the cage a pass from Melina Sarlo early in the third, and scoring on a breakaway near the end of that frame. Schuster had Sadie Cober, a defender, to thank for a save midway through the second quarter after venturing too far from the cage and letting a shot get behind her.

The girls volleyball team had an easy time of it Saturday, defeating winless Comsewogue in four, a match in which Alex Choi, East Hampton’s coach, made sure everyone played. With mostly subs on the floor, the Bonackers lost the third set 25-21, a double hit, two aces, and a failed double block doing them in after the teams were knotted at 21-21.

Choi has wanted to improve East Hampton’s serve returns, but, given the fact that Comsewogue didn’t serve well, “we didn’t get much practice.”

As for his team, he said, “We’re very solid, very competitive, with good servers, good hitters, and a good setter in Scout Lynch.”

Diane O’Donnell’s cross-country team bageled its homecoming opponent, Rocky Point, 15-40 on Saturday in a 2.5-mile race around the high school that Dylan Cashin won in 15 minutes and 45 seconds. Ryleigh O’Donnell was the runner-up, in 17:17, after which, within one second of each other, came Zion Osei, Emma Tepan, and Briana Chavez. Leah Fromm and Riley Miles, were the seventh and eighth-place finishers in a virtual tie, Rocky Point’s lead runner having preceded them. “It was a great day — we ran very well,” O’Donnell said.

The win improved the girls’ record to 5-2. “We’re the third-best team in our league,” McConville said. “Westhampton, where we’re to play Monday, beat William Floyd 6-1 and Floyd beat us 6-1, though all the doubles matches went to three sets.”