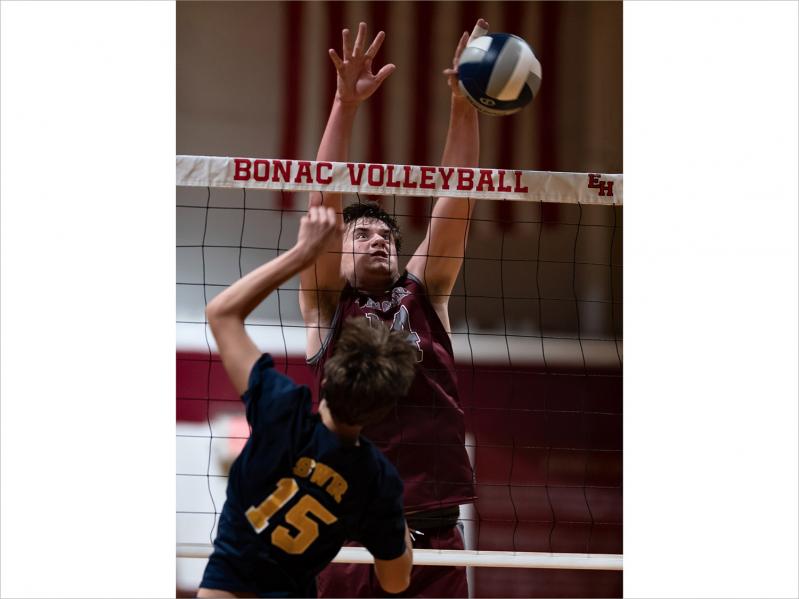 Calum Anderson, blocking a shot above, and his East Hampton High teammates swept through Shoreham-Wading River in three here on Sept. 6.
Craig Macnaughton
By Jack Graves

The East Hampton High School football team debuted at Wyandanch Saturday, and proceeded to overwhelm the Warriors on both sides of the ball on the way to a 50-8 rout, a rare point total for a Bonac squad.

“It was a total team effort,” Joe McKee, East Hampton’s coach, said on the team’s return.

Danny Lester got it going by recovering a fumble in the home team’s end zone, after which his cousin, Jason Lester, hit him with an extra-point pass. The first quarter ended with East Hampton up 22-0, thanks to 10-yard and 4-yard touchdown runs by Finn Byrnes, who was to gain 162 yards on 16 carries that day — most of them in the first half.

East Hampton scored twice in the second quarter thanks to a 3-yard carry by the quarterback, Charlie Corwin, and a 5-yard score by Mikhail Feaster. At the halftime break it was 36-zip East Hampton.

Five-yard and 10-yard touchdown runs by Eddie Cobb and Feaster rounded out the Bonackers’ scoring in the third quarter. Aryan Chugh made good on all six of his point-after kick attempts.

On the offensive line were Nick Ward, the center, Richie Maio and Adam Beckwith, the tackles, and Danny Rossano and Thinley Edwards, the guards, with Will Darrell, who McKee said “did a great job,” at tight end. Given the line’s solid play, Corwin stuck with the running game.

The junior varsity, playing at home against Northport, won by a similar margin that morning, with Alex Davis scoring three times and Jai Feaster twice.

“We’re excited about homecoming — we’ll see what we can do,” McKee said in signing off.

The field hockey and boys volleyball teams were 3-0 as of Monday. Playing at home on Sept. 6, the latter pummeled Shoreham-Wading River in three. The senior-heavy team, coached by Josh Brussell, also had wins over East Islip and Sayville as of Monday. Brussell said he thought the team’s “biggest test” would come at Sachem North on Tuesday.

Calum Anderson and Isaac Rodriguez are the outside hitters, Cash Muse and Hunter Eberhart the middles, Nick Schaffer is the opposite — playing opposite the opponent’s setter — and Alex Lombardo is the setter. Alan Rodriguez is the libero, in the back row, and Colin Vilante, a defensive specialist, subs in for Schaffer in the back row and serves.

“Against East Islip we won the first and second sets, lost the third and fourth, but won the fifth, 15-12,” said Brussell, adding that “we didn’t play our best that day. We played awesomely at Sayville, however, winning in three.”

East Hampton’s field hockey team, with Emma McGrory, the fleet right wing, figuring in all of Bonac’s goals, defeated a tough Eastport-South Manor team 3-2 here last Thursday. East Hampton converted a corner play early in the second quarter, and, on a subsequent breakaway, McGrory made it 2-0 before the visitors put one by Bonac’s agile freshman goalie, Caeleigh Schuster, near the end of the first half.

Going into the fourth period it was 2-2, but a deflected free hit taken by McGrory nailed down the victory with nine and a half minutes left to play. Samantha James’s team also had wins over Miller Place and West Babylon as of Monday.

“Our girls have the potential to be one of the league’s top teams,” Alex Choi, Bonac’s coach, said later in an email, adding, “I’ll have to work a bit more on serve returns, but the team is shaping up well and can only get better.”

Thanks largely to serving runs by Emma Terry, Katie Kuneth, and Amina Guebli, and to kills and dinks by Caroline DiSunno at outside hitter, East Hampton won the third set 25-20.

In other action last week, the girls cross-country team’s juniors, with Dylan Cashin and Ryleigh O’Donnell leading the way, placed second in the Jim Smith Invitational at Sunken Meadow State Park in Kings Park. Cashin was fourth over all in 21 minutes and 16 seconds, O’Donnell was 17th in 24:28, and Emma Tepan was 22nd in 25:18. Leah Fromm (26:24) and Riley Miles (26:56) also scored.William Huffman, a 29-year-old member of the Full Throttle team that’s based at Chelsea Piers in New York City, won the Steve Tarpinian Memorial Mighty Hamptons Triathlon at Noyac’s Long Beach Sunday morning in 2 hours, 4 minutes, and 22 seconds, topping a field of 314 finishers.

Huffman, a first-timer at Mighty Hamptons (though he won the Bob Aaron Memorial Triathlon in Montauk in June), won $1,000 from Event Power L.I. for his efforts in the 40-year-old event, which comprised a 1.5-kilometer bay swim, a 40K bike through rolling terrain in Bridgehampton, and a 10K run onto North Haven and back. Huffman estimated that there were upward of 100 triathletes at Chelsea Piers, adding that “we’ve got a great coach in Scott Berlinger.”

Jodie Robertson, 37, the band teacher at Herricks Elementary School in New Hyde Park, repeated as the female winner, and was fourth over all, in 2:08:08. She’d been faster last year, she said, owing to the fact that she’d worn a wetsuit, “which makes you more buoyant.”

Robertson, whose 2:06:48 last year stands as the women’s record, will do the Kona Ironman on Oct. 6 and is hoping to improve on last year’s 20th-place finish. Ironman was out for him, said Huffman, who prefers shorter distances.

Everyone agreed that the conditions that cloudy morning were perfect.

“The bike is technical,” Falkenhan said, “hilly in the beginning and then for the last half of it or third of it there’s a false flat. It looks flat, but it’s a steady uphill grade.”

He would train more, he said, “but I sell insurance and have three kids, and there are only so many hours in the day.”

Among the relay racers were Angelika Cruz, Bob Bottini, who, with Tim Treadwell made up the Lifeguardian Team, and Steve Cox, a fellow masters swimmer at the Y.M.C.A. East Hampton RECenter.

Cruz’s daughter, Daisy Pitches, was the third-place finisher in the East Hampton Volunteer Ocean Rescue squad’s Red Devil one-mile ocean swim at Atlantic Avenue Beach in Amagansett on Sept. 3, behind Liam Knight and Miles Menu. Cruz herself was sixth in that race. Lori King, who recently became the first person ever to swim between Block Island and Montauk, was eighth.