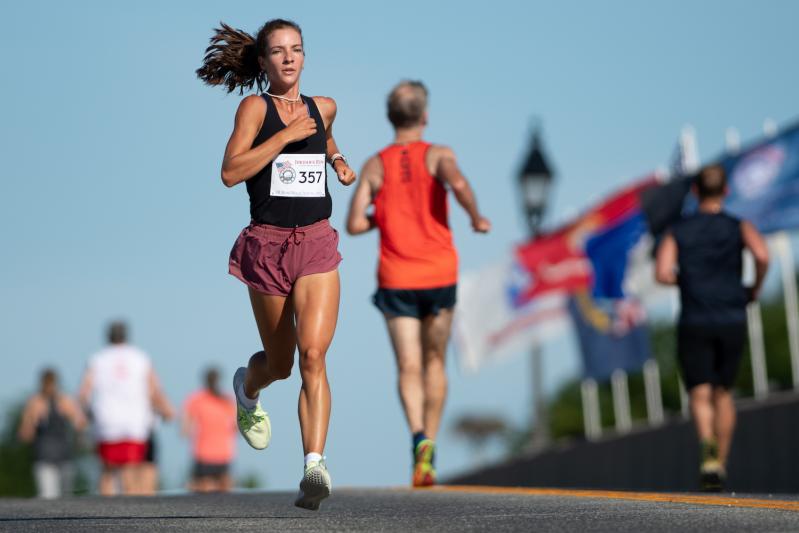 A first, at least a first in this writer's memory, occurred Sunday at Jordan's Run in Sag Harbor inasmuch as teenage siblings, Trevor and Rose Hayes of East Moriches, were the male and female winners of the 5K contested in memory of Lance Cpl. Jordan C. Haerter, a Sag Harbor Marine who, with his fellow sentry, Cpl. Jonathan Yale, gave his life on April 22, 2008, in stopping an explosive-filled suicide truck before it reached the Ramadi barracks in which some 50 Marines and Iraqi police were sleeping.

Haerter and Yale each were awarded the Navy Cross by Lt. Gen. John Kelly, then the commander of United States and Iraqi forces, who in a speech soon after eulogizing the young Marines -- Yale was 22, Haerter, 19 -- said they had six seconds in which to act. "There wasn't enough time to think about their families, their country, their flag, or about their lives or their deaths, but more than enough time for two very brave men to do their duty . . . into eternity. . . ."

The race, one of nine run in Suffolk County on behalf of military veterans, has been described as a special one insofar as community spirit goes. The Sag Harbor Fire and Police Departments, Sag Harbor's Junior Firefighters, and the East Hampton Fire Department, from whose hook and ladder truck an 800-square-foot American flag was hoisted opposite the start-finish line, were among the organizations taking part.

It was good to have a live event again, she said, after observing that the run in her son's memory had been, because of the coronavirus pandemic, virtual in 2020 and 2021. "We've all been through a lot and have found out that together we can be strong, that together we'll be fine. . . . Thank you to our active duty military and to all of our veterans here today, to the firefighters, police, and first responders so many of whom are in dual roles, a shout-out to all the [16] teams who registered for Jordan's Run, and thank you to our sponsors, volunteers, family, and friends."

Jordan's Honor, Ltd., a foundation she created to honor her son, had presented two $1,000 awards at Pierson High School's recent graduation, said Lyles, to Lady Tirado-Toral and Erik Guanga-Soliz. Lady's goal, she said, was to be an F.B.I. agent, and Erik's was to be a police officer.

These awards are made each year to Pierson seniors who aim either to enter the country's armed services or to embark on a career in law enforcement. Proceeds from the race also help support the Jordan Haerter Home for Transitioning Veterans in Greenville, S.C.

When last run in Sag Harbor, in 2019, Paige Duca, then a Boston College student, was the winner, in 17 minutes and 24.48 seconds. She would have won 2018 as well had she not continued running on into North Haven rather than heading back toward the high school once having crossed the Jordan C. Haerter Memorial Bridge.

It was hot and humid in Sag Harbor that day, though it didn't bother Hayes, a Westhampton Beach High School junior who runs the mile in spring track. He didn't lead wire to wire, but made his move, he said, at about the two-mile mark.

Trevor's 18-year-old sister, Rose, is better known on the South Fork for the fact that in her career at Westhampton Beach she won three county girls tennis championships. Trained by Adam Lee of Glen Head Racquet and Fitness, she is to play for Gonzaga University in Spokane, Wash., beginning in the fall. Last fall, at Westhampton Beach, she forwent tennis for cross-country. She was ninth over all on Sunday, in 20:14.75.

Another cross-country -- and track -- runner, Sara O'Brien, 14, who runs with Pierson's girls cross-country team and with East Hampton's winter and spring track teams, topped the female 14-and-under division with her 24:56.51. Teammates of hers, Sabrina McManus (27:42.81) and Bennett Greene (30:06.27), who also are 14, placed third and fourth in that division. Teddy Rattray, 12, of East Hampton, was third in the male 14-and-under category.