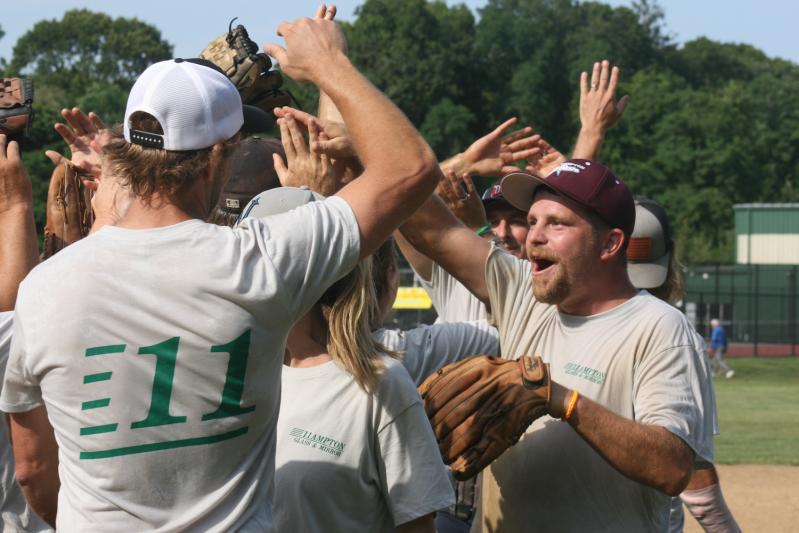 The Travis Field memorial double-elimination coed softball tournament, which many say is their favorite event of the summer, is to begin Thursday at the Terry King ball field in Amagansett with 17 teams — seven in the A bracket and 10 in the B bracket — vying for trophies.

The net proceeds are to go to a foundation set up in memory of the late Travis Field, who died in an auto accident in 2008 at the age of 20. This year, the foundation handed out six $1,000 scholarships to the following East Hampton High School seniors: Madeleine Brown, Brylinn Bushman, Andrew Dimopoulos, Sarah Morgan, Dante Sasso, and Bruce Siska. Mike Graham, one of the tournament's organizers, has said the scholarship winners reflect his late friend's qualities, athleticism and a desire to be of service to this community being two of them.

A "bracket bash" party at the Clubhouse in East Hampton Friday drew 150 attendees, Graham said Monday morning. The tournament is maxed out on teams, he said.

Games are to be played from 5 p.m. today through Sunday evening, with daytime games beginning at 8 a.m. on Saturday and Sunday. Last year's winners, both of which came out of the losers brackets, were the Bad News Bubs, in the A bracket, dethroning the Pink Panthers, the tourney's winningest team, made up largely of Travis Field's friends. Action Irrigation repeated as the B bracket champ.

Today, the Bubs and the Raptors start off the tournament at 5, with Taste Our Sauce and the Pink Panthers scheduled to play at 6:15, followed by Hampton Glass and Nico's Pools, at 7:30, and by HCDC and the Bud Heavies, B bracket opponents, at 8:45.

Tomorrow, it's Bonac Vice vs. East Hampton Village P.B.A. at 5; the Woodchoppers versus the Jetty Grinders at 6:15; Springs against either the Bud Heavies or HCDC at 7:30, and Olympic Heights and the Screwballs at 8:45.

Turning to other softball news, East End Land Planning began a defense of its 2021 East Hampton Town women's slow-pitch title by turning back Montauk Dental 13-10 in a first-round best-of-three league playoff series last Thursday, and Groundworks defeated P.B.A. 13-7. Maura Mirras, whose daughter, Kathryn, got the Montauk Dental team together, "pitched great -- she was hitting the front of the plate," according to Kathy Sarlo, who co-manages East End Land Planning with Katie Osiecki, a pitcher for the defending playoff champions.

Second games in the first-round series were to have been played at the Terry King field Tuesday, with the winners advancing to the final series that is to begin this coming Tuesday. Last year, East End Land Planning defeated Groundworks, which had been the titlist in 2019, in a one-game showdown by a score of 8-3.

The Montauk wood bat league's first-round playoff series were to have begun Monday, with Shagwong vs. the Point, and with the Leftovers versus Jeep.

Mashashimuet Park's History and Future
A Conference for Young People to Create Solutions
Get Outside, Get Moving
END_OF_DOCUMENT_TOKEN_TO_BE_REPLACED