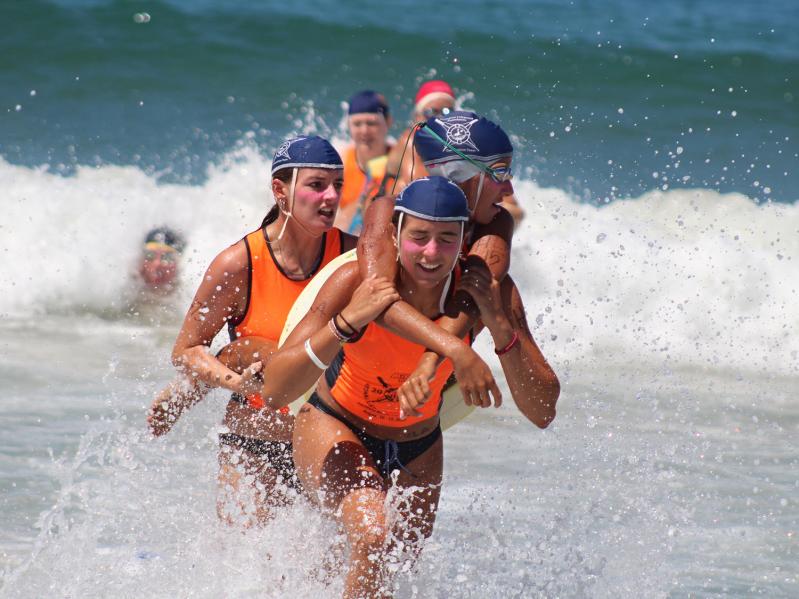 Emma Hren, at left, and Melina Sarlo brought in Corrina Castillo, “the victim,” in the U-19 women’s rescue race. 
Nicole Castillo
By Jack Graves

The H.L.A.’s senior guards, who numbered 47, finished fifth in the 26-team tournament, behind Los Angeles County and California State and the Sussex County and Monmouth County New Jersey squads.

The 37 local junior lifeguards “were phenomenal,” according to John Ryan Jr., chief of East Hampton Town’s guards, though the points they won were not included in the overall team score. Last year, when the H.L.A. finished third, its highest finish ever, Ryan said that had the junior guards’ scores been added in, “we probably would have won.”

Bridget Lockwood won the 12-13 distance swim, Cybelle Curry won the 12-13 beach flags, and Amanda Calabrese, one of five H.L.A. guards to qualify for the final, won the open women’s beach flags. Also qualifying for the final were Kiara Williams, O’Donnell, Sarlo, and Bella Tarbet. Calabrese, Tarbet, Sarlo, and O’Donnell placed third in the women’s open 4-by-100 relay, and Calabrese and Jane Brierley were third in the open women’s board rescue. Calabrese finished 16th overall among the female competitors.

In age group competition, Angelika Cruz topped the women’s 50-54 age group in the surf race, the board race, and the 2K beach run. She was second in the run-swim-run. Mike Bahel won the 50-59 men’s beach flags; Barry Moore was second in the 60-64 beach flags; Jonathan Tarbet was fourth in the 50-54 2K run, and John Ryan Jr. and T.J. Calabrese were fourth in the 55-59 surf boat race.