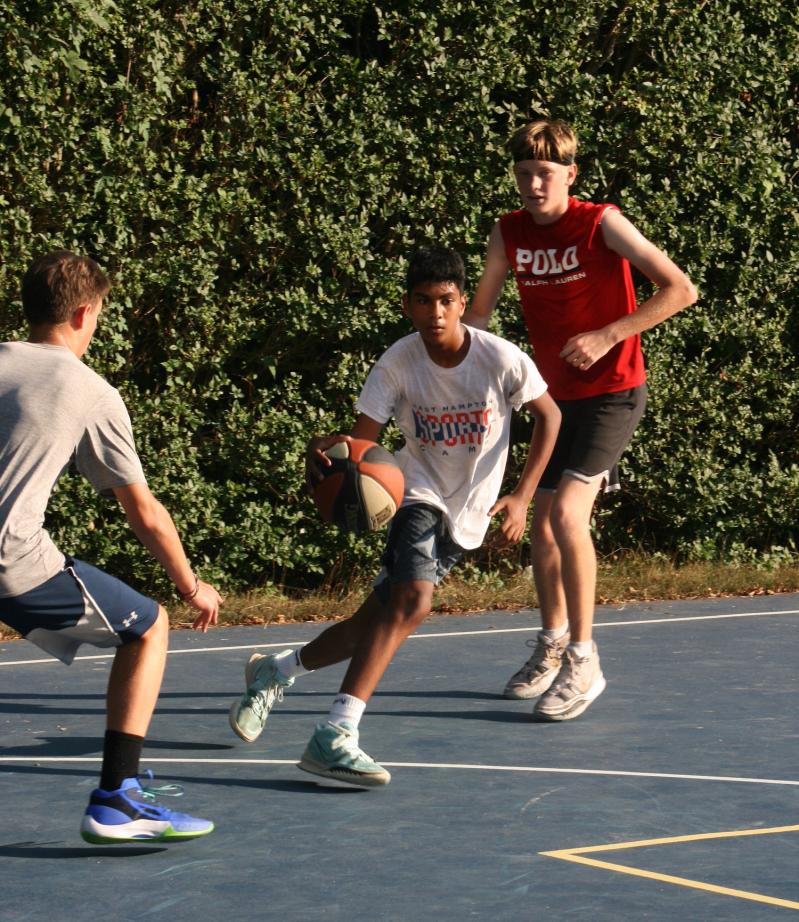 Hoops 4 Hope, an organization founded by Mark Crandall of Amagansett in 1995 to work with young people in Zimbabwe and South Africa, is now also working with youngsters here, using basketball as a means by which to teach them “what it means to be on a team,” in the words of Anthony Allison, the nonprofit’s executive director.

“It’s the spirit of ubuntu that we want to instill,” Allison said the other day in discussing the inaugural Hoops 4 Hope 3-on-3 basketball tournament at East Hampton High School on Aug. 20. “The spirit of ubuntu embodies thinking beyond yourself, understanding your skill sets, what you need to work on personally and as a player so that your team is more successful. It’s about how resilient you are when you make a mistake. . . . Basketball and sports teach you life lessons. Everything you take from basketball can be applied to your life. . . . Am I looking at the big picture? When things break down what can I do to effect a better outcome. . . ? Basketball translates very well into life.”

That “I am because you are” spirit, which Hoops 4 Hope’s Thierry Kita brought to the attention of Doc Rivers and his Boston Celtics team, enabled them to win the National Basketball Association’s championship in 2008, Rivers has said.

Allison, a classmate of Crandall’s in the Amagansett School -- “we were both taught by his father [Milford Crandall] in the fifth grade” — worked with H4H in its early years, after which he continued working with youth in Norwalk, Conn., for two decades before returning to Amagansett and reacquainting himself with Hoops 4 Hope’s efforts. “Mark and I talked mid-pandemic about how we’d continue to provide programming in Hoops 4 Hope’s seven communities in Zimbabwe. This was in 2020. We couldn’t get there then, but, luckily, the infrastructure that had been built enabled us quickly to pivot so we could provide support to families, Covid updates, and other educational support and fun games for the kids, who didn’t go to school for two years, and who didn’t have Internet access at home.”

“Mark went there in January and February, and in February and March, after 20 years not having been, I was able to witness the reopening of our on-the-court programming, and to be with the Hoops 4 Hope coaches and mentors, who were extraordinary, true professionals. They were tremendous at working with children -- it was breathtaking.”

Hoops 4 Hope served 80 to 100 children per day at its Zimbabwe centers, and from 35 to 60 a day in Cape Town’s townships, Allison said.

What he had seen in Africa, he said, inspired him to suggest on his return that the organization add East Hampton’s youth to its purview, an idea that the Montauk School’s administration found intriguing. “They reached out to us to work with their sixth graders, which we did for eight weeks this spring, using basketball as a vehicle to introduce them to the spirit of ubuntu with great success. And now they want us to follow up with these students when they’re in the seventh and eighth grades. We’re very, very excited.”

As for the 3-on-3 tournament, Allison said he could think of no better place to hold it than on the “Coach Petrie” court at East Hampton High. “Coach Petrie was a very important figure in my life. He was an early supporter of Hoops 4 Hope -- I’ve always been indebted to him. This tournament, which hopefully will go on long after I’m dead, is not only to introduce the kids here to our program, but to honor him.”

“Anybody can come,” Allison said of the fund-raiser tourney. “We’ll have brackets in men’s and women’s divisions for 13 to 17-year-olds and for 18-plus.” Sign-up is online, with a $300 entry fee per team, “all of which will go to Hoops 4 Hope programming here and abroad. We’ll have the gym from 8 a.m. to 8 p.m., though it won’t go on that long. We’ve got sponsorship and people can make donations. There will be food, music, a silent auction, raffles, and 3-point and foul-shooting contests. . . . We just want to start the process of having a tournament on a yearly basis so that people can learn about Hoops 4 Hope’s work with kids locally and abroad and have a good time.”