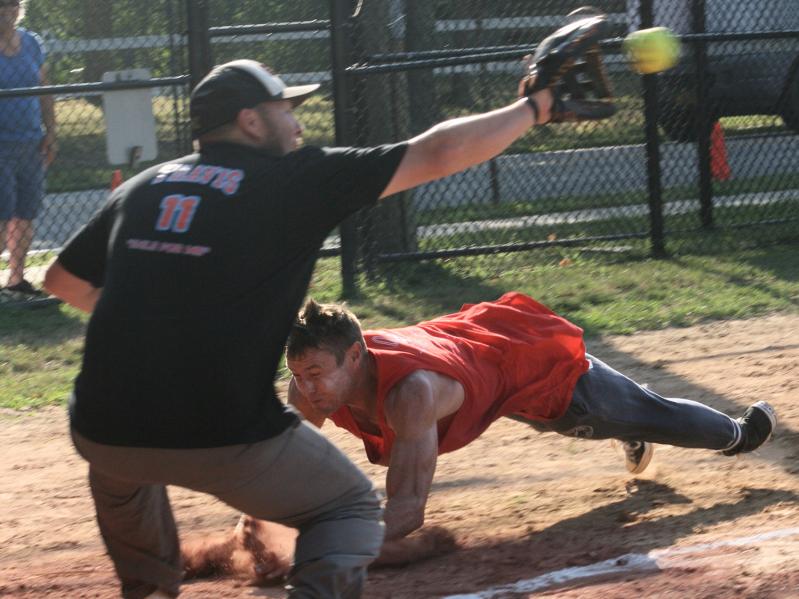 Colin Davis of the Raptors was tagged out by the Bad News Bubs’ Vinny Alversa, above, but the Raptors went on to win last Thursday’s Travis Field opener 3-1.
Jack Graves
By Jack Graves

The Bad News Bubs, who once again came out of the losers bracket, repeated as the A bracket champion in the Travis Field memorial double-elimination softball tournament, which was contested by 17 teams from last Thursday through Sunday at the Terry King ball field in Amagansett. The Bud Heavies, a team that Riley Duchemin put together, and Included Kurt Matthews, Tom Desmond, and Joey Burdey, were the B bracket champs.

The Bubs, whose heavy hitters were Andrew Rodriguez, Mike Rodriguez, Tucker Genovesi, and Vinny Alversa, who coaches East Hampton High’s varsity baseball team, lost 3-1 to the Raptors in last Thursday’s opener, plunging them into the losers bracket right off the bat.

They proceeded to climb out of it, however, by subsequently defeating the five-time-champion Pink Panthers, who had been beaten by Hampton Glass, and avenging themselves Sunday afternoon on the Raptors by a score of 7-5, thanks largely to a three-run home run by A-Rod in the bottom of the third inning and a two-run single by Alversa that accounted for the winning run in the sixth. Doug Dickson was the Bubs’ pitcher, a master of high-arc deliveries.

The Bud Heavies enjoyed wins over HCDC, Springs, and, in the final, the Jetty Grinders, Kyle Mannix’s team.

It was the 14th year for the tournament, which raises money to give out annually in scholarships to East Hampton High School seniors and honors the memory of Travis Field, who, at the age of 20, died in a motor vehicle accident on May 15, 2008. Soon after, a core group of his friends that included Brian Anderson Jr., Andy Tuthill, Mike Graham, Austin Bahns, and David Samot Jr. -- a number of them baseball and softball teammates of his -- decided to hold a softball tournament in his name. It remains “extremely popular,” according to Graham, who chairs a committee that comprises Travis’s parents, Chris and Annmarie, Alexa Wolf, Sondra Vecchio, Dylan Field, Mike McGuire, Bahns, and Brian Anderson Jr.

This year’s tourney attracted 300 or so players. Thirty-one games were played, with the second game of the Bubs-Hampton Glass final ending around 10:15 p.m.

“It was nice to see that the high school had a team,” Bonac Vice. “It’s great to see the younger kids coming out,” Graham said Monday morning. “They always want to know how old you have to be. You’ve got to be at least 16 to play in the A bracket and at least 14 to play in the B bracket.”

As for the amount of money raised, Graham said it was too soon to tell. Six $1,000 scholarships were given out this year, to Madeleine Brown, Andrew Dimopoulos, Sarah Morgan, Dante Sasso, Bruce Siska, and Brylinn Bushman, who sang the national anthem at the opening ceremonies.

Awardees are to “display great leadership in sports, love their school and community, and show kindness to others.”

On the backs of the Raptors’ shirts it said, “To live in the hearts of those we leave behind is not to die.”