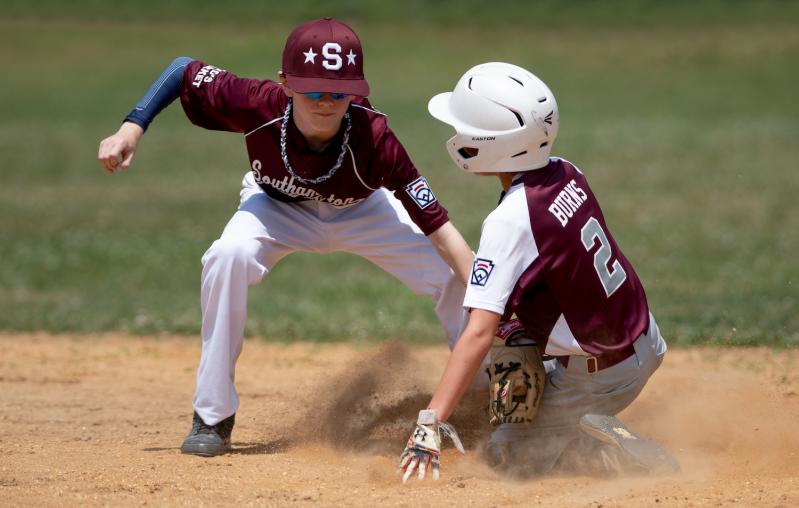 Parker Burns not only blanked Southampton 1-0 at Pantigo Sunday, giving up just one hit, but also had two himself, including a double (see above) in the second inning.
Craig Macnaughton
By Jack Graves

Facing Southampton in a must-win game at the Pantigo fields here Sunday, East Hampton's 11-12-year-old Little League all-stars edged the young Mariners 1-0 to remain in contention for the District 36 championship.

As the score indicated, it was a pitchers' duel, with Southampton's Thomas Lavinio, a righty with a smooth delivery, versus Bonac's Parker Burns, who was every bit as effective. Burns gave up just one hit, a single by Wesley Warner in the bottom of the second inning, struck out four, and walked two. Lavinio gave up one run on four hits, struck out 11, and walked one.

Colton Everett, hitting eighth in East Hampton's lineup, led off the top of the third with a double to center field and, one out later, came home from third base on a single up the middle by Harry Thomas. Everett's run was to be the only one of the very well-played game.

Burns got two hits that day, a one-out double down the third baseline in the second, after which Lavinio notched two strikeouts, and an infield single in the fourth.

East Hampton committed one error, but the team's fielding was otherwise flawless. Burns made the defensive play of the day as, with no outs and Warner on first in the top of the second, he reached up to snag a hard line drive hit right at him by Anthony Galante before firing a strike to first that doubled up Warner. The next batter, Andrew Wetter, grounded out second-to-first to end the inning.

"Parker pitched the game of his life, the defense was fantastic, and the kids -- all of them were stars on their East Hampton Little League teams before we put this one together -- continue to play selflessly," Jason Biondo, the 11-12's head coach, said afterward.

Assuming the East End [Westhampton] entry defeated Sag Harbor that day, which he thought it would, East Hampton would probably wind up second in the A bracket, behind East End, and would thus play the B bracket champion in the next round of the District 36 (eastern Suffolk) tournament, Biondo said.