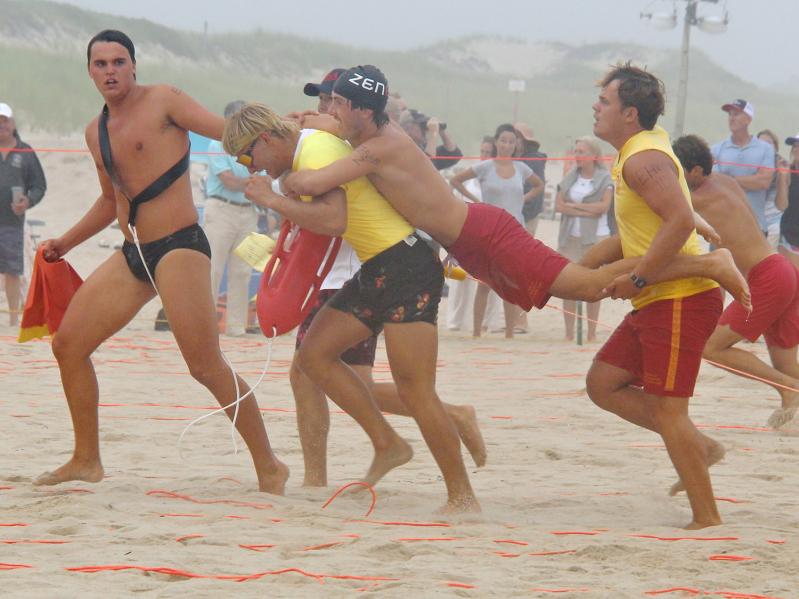 One of seven lifeguarding skill events contested at the invitational Main Beach tournament last Thursday, the landline rescue requires that all four team members — the “victim,” rescuer, and the two pullers — finish together on the beach. That’s the East Hampton Village B team above.
Durell Godfrey
By Jack Graves

Smith Point, the defending champion, whose teams have often won this now-35-year-old tourney, wound up fourth in the men’s competition, presumably its lowest finish ever, leading John Ryan Sr., the 87-year-old guru of lifeguarding here, to predict that Smith Point would be ready Monday when it was to have played host to the Long Island championships.

It was the third-straight win here for the Smith Point women, who edged East Hampton’s A teams in 2019 and last year. Because of the coronavirus pandemic, no tournament was held at Main Beach in 2020.

Besides the big turnout of lifeguard teams, with Long Beach being the farthest-flung, the elder Ryan said, “It was nice that the village, which did this last year too, provided bleachers and portable lights so we didn’t have to worry about beach flags being contested in the dark.”

John Ryan Jr., chief of the town’s guards, and Drew Smith, who oversees the village’s, ran the tournament and were helped by, among others, Don McGovern and Diane O’Donnell, who, according to the elder Ryan, “has been keeping score flawlessly — and it’s very hard to do — for at least 20 years.”

Beach flags was the last of the seven lifeguard skill-related events and, as it usually did, according to Ryan, proved to be pivotal in each case. “Had the town men’s team won beach flags, they would have won the tournament.”

Long Beach and the East Hampton Town men’s A team went one-two in the final “musical chairs” event, in which contestants, beginning from a prone position, dash 22 yards to capture 14-inch-high hose lengths that are fewer in number than contestants. Thus Long Beach, a first-time entry — and John and Pat Ryan’s hometown — emerged a 68-66 victor.

The Smith Point women won five events (including beach flags), besting East Hampton’s A team by 2 points. East Hampton finished with two wins (in the landline rescue and in the paddleboard relay) and placed second four times and third once.

The Legends team, made up of East Hampton Village Ocean Rescue members, “competed in every event except for the run-swim-run,” said Ryan, adding that “Southampton, with the Duryea brothers, won the paddleboard relay going away. The Southampton men and women each finished third in the tournament, a very good showing.”

Though East Hampton’s A team finished fifth in the 2K (1.24-mile) distance run, Ryan Fowkes, a standout runner at George Washington University, was the individual winner, as was Dylan Cashin in the women’s distance run, a race that Smith Point’s team won.

East Hampton and Southampton’s senior and junior lifeguards will join forces at the United States Lifesaving Association’s national tournament at Hermosa Beach, Calif., which is to be contested from Aug. 10 through 13. Donations toward that trip can be made through the Hampton Lifeguard Association’s Facebook page.

Two ocean recertification tests that 70 to 80 guards are expected to take also loom. The first is to be at Main Beach on Monday, the second at Indian Wells in Amagansett on Aug. 8. The junior lifeguard tournament is to be held at Atlantic Avenue Beach, also in Amagansett, on Aug. 6 and 7 from 8 a.m. to 2 p.m. each day.

Mashashimuet Park's History and Future
A Conference for Young People to Create Solutions
Get Outside, Get Moving
END_OF_DOCUMENT_TOKEN_TO_BE_REPLACED