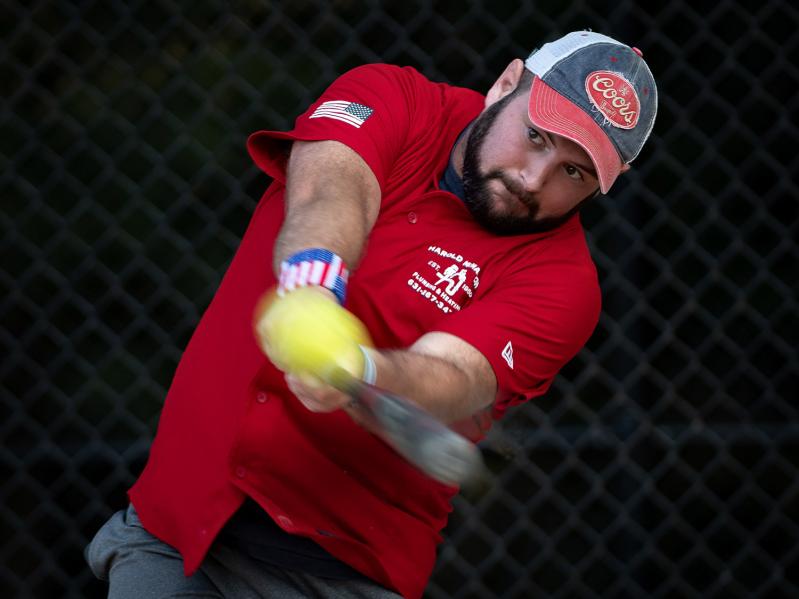 Tom Thorsen of McMahon’s, with four members of that family, including his fiancee, Marith McMahon, looking on, went six-for-six in Friday night’s slow-pitch game with Shelter Island, and drove in seven of the team’s 28 runs. 
Craig Macnaughton
By Jack Graves

Well into the summer season, the East Hampton 7-on-7 men’s soccer and men’s slow-pitch softball leagues’ defending champions, the East Hampton Soccer Club and McMahon’s, find themselves with a lot of ground to make up.

Going into this week, the Soccer Club was at the bottom of the 7-on-7 standings at 0-2-2. McMahon’s, which, if Friday’s lopsided win over Shelter Island is an indicator, seems to be on the upswing, though going into this week it is in the middle of the slow-pitch pack at 2-2.

An anticipated 7-on-7 clash between that league’s top two teams, Sag Harbor United and Tortorella Pools, on July 12 — the first of three games scheduled that night at East Hampton’s Herrick Park — was put off because the field’s lights weren’t working.

Sag Harbor United, which has on its roster two strong offensive players, Donald Martinez, formerly of F.C. Tuxpan, and Mario Olaya, who came over to S.H.U. after a decade with Maidstone Market, was 3-1-0 as of Monday, followed by Tortorella at 2-2-0, F.C. Tuxpan at 1-1-2, Maidstone at 1-2-1, Liga De Gulag at 1-2-1, and the East Hampton Soccer Club, winless as of Monday.

There were five spectators at the McMahon-Shelter Island game, which began at 7 p.m. — four members of the McMahon family and this writer. The main drawing card for the McMahons presumably was Tom Thorsen, the team’s powerful left-handed third hitter in the lineup, who is to marry Marith

McMahon on Shelter Island at the end of the month.

Thorsen couldn’t hit a home run for everyone, but he did hit two, a two-run shot high into the sky in the top of the first inning and one in the sixth that accounted for three runs. He went six-for-six over all with seven runs batted in.

Shelter Island was down 7-0 before it got on the scoreboard with a run in the bottom of the second thanks to a rare error by McMahon’s third baseman, Pat Silich.

It was 15-1 before the Islanders were to score again, in the fourth. Bob Brewer, the pitcher, drove in two with a two-out base hit, and two more came home on an error by John Pizzo, McMahon’s usually sure-fielding shortstop.

If, at 15-5, the game hadn’t already been put away, McMahon’s made sure that it was by scoring eight more runs in the top of the fifth, with Dave Moss, Jamie Wolf, Thorsen, Brendan Hughes, Keeler Otero, and Pete Vaziri getting the r.b.i.s.

The umpire, Matt Bennett, put an end to it in the top of the sixth, after a two-run home run by Kurt Matthews put McMahon’s up by 16.

Friday’s blowouts aside, Ray Wojtusiak, who manages Sand & Sea, said during a conversation over the weekend that “the league is fantastic, extremely competitive across the board. Any team can win on any given night.” There were, he said, “no patsies, which is great — it’s a lot of fun. . . . McMahon’s beat us 17-16 two weeks ago.”

McMahon’s has pretty much the same lineup it’s had in the past two seasons. Sand & Sea has added a few, namely Hunter Fromm, Devon Coy, Nick Knoebel, and Ricky Smith, to a lineup of veterans that includes Wojtusiak, Joe Sullivan, Diego Palomo, Keith Steckowski, Sonny Sireci, Chris Pfund, Rick White, Hayden Ward, and Rob Nicoletti, who, at 66, is the league’s eldest competitor.

Mashashimuet Park's History and Future
A Conference for Young People to Create Solutions
Get Outside, Get Moving
END_OF_DOCUMENT_TOKEN_TO_BE_REPLACED