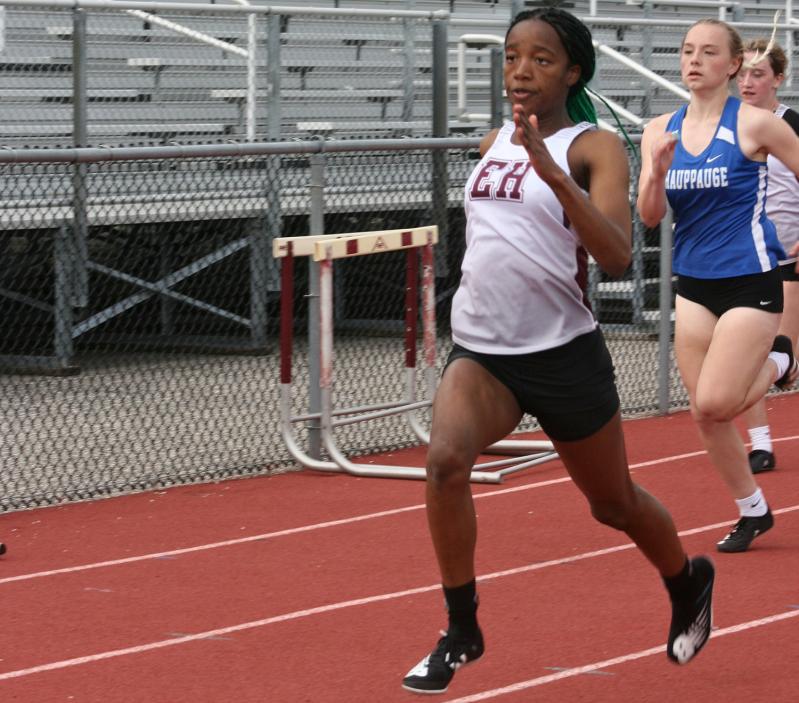 Leslie Samuel, a Bridgehampton High School junior who competes with East Hampton High’s girls track team, was third in the 100-meter dash, third in the long jump, and fifth in the 200 at the county Class B meet on May 25.
Jack Graves
By Jack Graves

Meredith Spolarich, an all-around performer, did not make all-league this season, primarily, East Hampton’s coach, Yani Cuesta, said, because she wasn’t able to concentrate sufficiently on the high jump, whose competitive bar, as it were, was high this year. “In the dual meets, she’d do 4-10, which was good enough to win, and then we’d have her go do other events,” said Cuesta, “so she really didn’t have the time to clear five feet.” Cuesta was happy to add that the Pierson (Sag Harbor) High School junior has said she’ll compete with East Hampton’s indoor team in the winter.

“She had an incredible day,” Cuesta said.

Spolarich’s fourth-place finish in the county meet high jump, at 4-10, qualified her to compete in the state qualifier, held at Kings Park High School last Thursday and Friday, “but she had other obligations, including SAT testing,” said Cuesta, who took Samuel, Cashin, O’Donnell, Sara O’Brien, a Pierson eighth grader, and P.J. Ramundo, a member of East Hampton’s boys team, to the state qualifier. “Leslie, Ryleigh, and P.J. went with me on Thursday, and Dylan, Sara, and Ryleigh on Friday.”

Cashin met the national standard in the 2,000-meter steeplechase at the county meet, finishing the grueling race in sixth place in a personal best 7 minutes and 40.61 seconds. The cut-off for the national steeplechase competition was 7:45, said Cuesta, who signed Cashin up to compete in the Nike Outdoor Nationals at the University of Oregon’s Hayward Field over the June 16-to-19 weekend.

Jenn Fowkes, treasurer of the Old Montauk Athletic Club, which is among the organizations helping to underwrite Dylan’s expenses, said Dylan is the first female athlete from East Hampton to qualify for a national steeplechase race. East Hampton does not have a steeplechase course, as does Kings Park, where the county meet was held. Fowkes’s older son, Ryan, who is a star long-distance runner at George Washington University, and Ben Turnbull, who coaches East Hampton’s boys team, have  competed in past national steeplechase races, she said.

Back to the state qualifier, Cuesta said that Samuel came very close to leaping 17 feet in the long jump, “but they said she fouled. If so,” said Cuesta, “it wasn’t even by a centimeter.” The top seven went on to the finals. Samuel finished 14th, at 16-1, and also placed 14th in the 200 trials, at 27.04. “I think she was a little nervous, she seemed to slow up in the final stretch.”

Cashin’s 7:45.23 in the steeplechase was good enough for 10th. O’Brien, who fell “when her trailing foot clipped the third barrier on the second lap,” nonetheless turned in a personal best time of 8:29.63 in finishing 21st, Cuesta said

“Afterward she was bummed out,” the coach said, “because she thought she’d done poorly, but brightened when I told her that even despite the fall she had P.R.’d. She’s P.R.’d at every meet this season, and she made it to the state qualifier as an eighth grader. Watch out for her as she grows and gets stronger!”

Likewise, O’Donnell initially didn’t think she’d done well in the 400 intermediate hurdles, a race that was put over from Thursday to Friday because of rain. “But her 72.25 was a personal record,” said Cuesta. “She had warmed up properly, which she hadn’t the day before, and looked great in getting over the hurdles. She took 2 seconds off her previous best time. She was picked to finish 24th and finished 12th. When Eric [Malecki] and I pointed those things out to her, she was happy.” O’Donnell placed 17th in the open 400 trials in 63.66. Ramundo was 18th in the boys 3,200 in 10:25.40.

In other county meet events, the 4-by-400 relay team of Spolarich, Khalila Martin, Cashin, and O’Donnell, finished fourth in a season-best 4:29.57; O’Donnell finished seventh, just out of the medals, in the 400-meter race and in the 400 intermediate hurdles, and Baratta’s discus throw of 70 feet, 3 inches, good for 11th place, was a personal record, as was Alexa Gomez’s ninth-place 76.72 in the 400 hurdles.