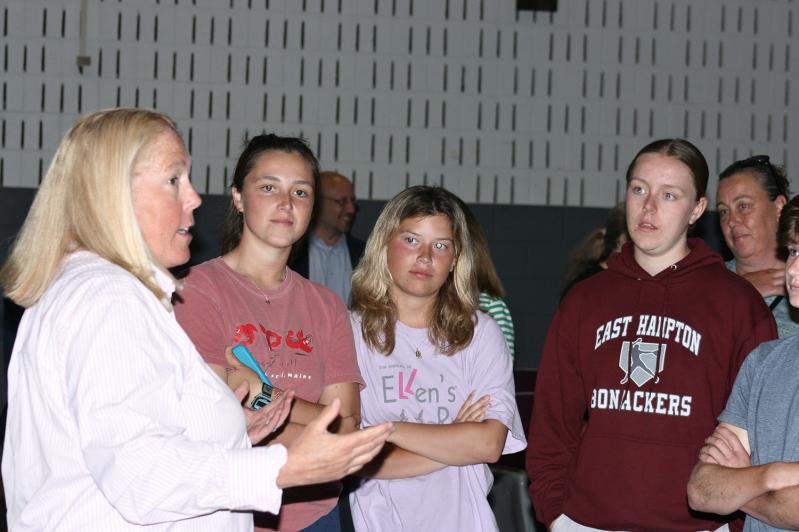 Kathy Masterson, left, who will become the East Hampton School District’s athletic director on July 1, met at the high school with students, parents, and coaches on June 15.
Jack Graves
By Jack Graves

Last Thursday, the morning after she’d been formally introduced to parents, coaches, and students as East Hampton High School’s new athletic director, Kathy Masterson said she welcomes “the challenge to continue to grow our programs and to work together toward a common goal, which is to make East Hampton the best it can be.”

A native of the South Fork who played field hockey, basketball, and softball at Southampton High School and was a physical education teacher and coach at Shelter Island, Southampton, and Westhampton Beach before becoming Westhampton’s athletic director in 2006, she is the sixth A.D. in East Hampton’s history, Fran Kiernan, Dick Cooney, Chris Tracey, Mike Burns, and Joe Vas having been her predecessors. Masterson, who is 53, said she realized that she had “huge shoes to fill,” but that she was “up to the challenge.”

Under her leadership Westhampton Beach’s sports teams have become strong ones across the board. Most recently, that school’s girls lacrosse team was a state finalist.

In addition to being the athletic director — as of July 1 — she will oversee physical education, health, and driver’s education, as has also been the case with her immediate predecessor, Joe Vas.

With about a dozen students and parents gathered around her in the high school’s auditorium on June 15, after she and Adam Fine, the district superintendent, had spoken, Masterson said she was “for lights — we had on average 2,000 fans come to our Friday night football games at Westhampton — but only if that’s what the community wants,” that athletes’ parents should advise their children to take upon themselves the responsibility to discuss with coaches any concerns they might have, that winter track, “a good second sport,” ought to be more highly valued, and that all — parents, coaches, student-athletes, and administrators — should work together as a team to build morale.

“I’m well aware of the ‘leap-frogging’ that goes on,” she said concerning issues with coaches. “I know that parents want to take care of their children, but you want to teach them to take responsibility, you need them to be able to deal on their own with adversity.”

Agreeing that the high school’s swim teams, buoyed year after year by youngsters coming up through the Y.M.C.A. East Hampton RECenter Hurricanes youth program and junior lifeguarding, probably served as an ideal — swimming being consonant with East Hampton’s culture — Masterson said she would encourage broader participation in the Police Athletic League and the Hamptons Youth Athletic League. She would encourage more students to use the well-stocked Kendall Madison weight room as well.

As for East Hampton football, which, under Joe McKee, continues to rebuild, “I think we’ll be fine in Conference III. There are very strong teams in Conference IV [in which East Hampton has played the past two years] too. . . . We’ll continue to build the program.”

East Hampton is the lowest seed among Conference III’s 14 power-rated teams. Formal sign-ups are to take place a month before the season begins, in mid-July.

Masterson said she was eager to get started. She will have her office moved to “the back of the building, overlooking the tennis courts” so as to be nearer the athletic fields. She’ll continue to live in Southampton, but she doesn’t anticipate that the commute will be bad.