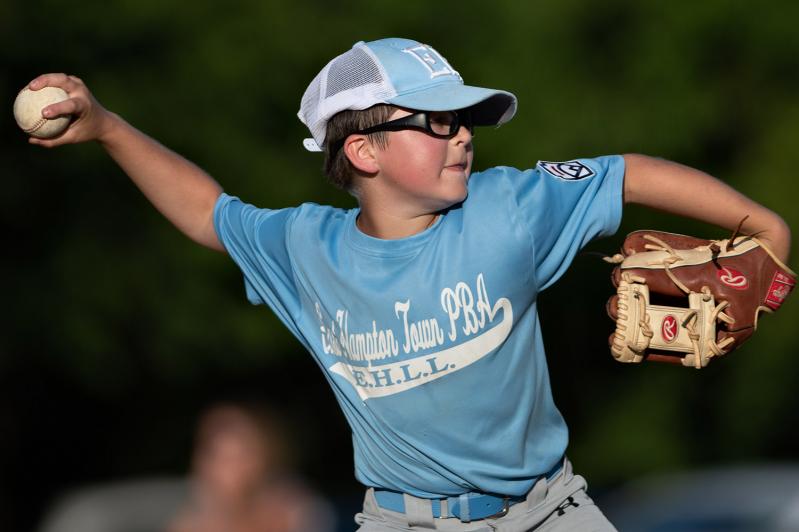 Finn Alversa pitched a shutout and scored a run in a 2-0 win over the Amagansett Fire Department Friday evening. 
Craig Macnaughton
By Jack Graves

Last weekend was a sportive one for all ages, as it marked the end of the East Hampton Town Little League’s best-of-three “World Series” and the running of two road races, the Beacon of Hope 5K Saturday morning at the Montauk Lighthouse and the 43rd Shelter Island 10K later that day.

The East Hampton Town Police Benevolent Association team coached by Ken Dodge and Vinny Alversa won the Little League’s 11-12-year-old championship. The team, with Alversa’s son, Finn, on the mound, edged the Amagansett Fire Department 2-0 at the Pantigo fields Friday evening. All three games were close, the P.B.A. winning game one 9-8 in the seventh inning and the Fire Department winning the second 13-12.

Friday’s deciding game was a pitchers’ duel, with Alversa getting the best of Parker Burns, though not by much. Alversa gave up six hits, Burns gave up five. Alversa struck out 11, and Burns K’d six. Neither pitcher gave up a walk. A two-out double by Ethan Dodge scored Alversa from second base to break the ice in the bottom of the third inning, and in the bottom of the fourth Ryan Balnis’s sacrifice fly plated Colton Everett, who, in leading off, had made it all the way around to third after his fly to right field was dropped.

It was the first championship for Dodge, who has had teams go deep in local and in District 36 tournaments in the past. “The greatest thing this season,” he said, “was seeing these kids, who didn’t know each other, come together as a team. They’re a great group, they’re all friends now.”

Jason Biondo, with Dodge and Ray Wojtusiak assisting him, is to coach the 11-12-year-old all-star traveling team in District 36 tournament play. Chris Carney, assisted by Chris Diamond and Scott Abran, is coaching the 9-10s.

On Saturday morning, also at Pantigo, Bostwick’s, with Ella Field pitching, defeated Round Swamp Farm in the third game of their series to win the Little League 9-10 softball championship.