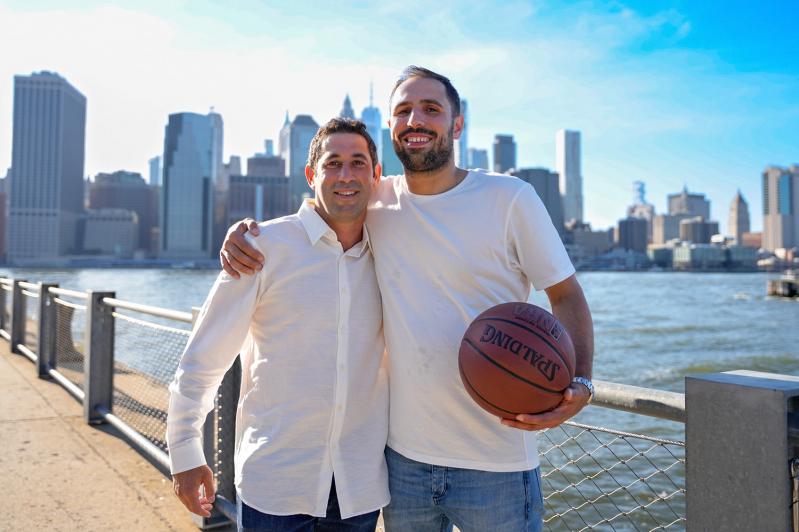 Jared Effron and Griffin Taylor, co-founders of the Program NYC, will hold a basketball skills camp with current and former professional players and coaches on Saturday at the Ross School. 
Moving Pictures
By Christopher Walsh

The Ross School in East Hampton will be the site of a basketball skills camp for youth ages 8 to 18 and featuring current and former National Basketball Association players and high-level coaches on Saturday from 9 a.m. to 3 p.m.

Miles McBride of the New York Knicks; Cole Anthony of the Orlando Magic; Kenny (the Jet) Smith, a two-time N.B.A. champion and now a sports commentator; his son, K.J. Smith, a former guard for the North Carolina Tarheels of the N.C.A.A. and now a basketball media analyst, and Emanuel (Book) Richardson, boys basketball director of the New York Gauchos Amateur Athletic Union basketball program will lead the camp. The cost is $350.

The camp is an outgrowth of the Program NYC, a planned 20,000-square-foot, state-of-the-art facility and community hub designed to help New York City’s youth basketball talent achieve greater success. It will be open to boys and girls of all skill levels and socioeconomic backgrounds, and to families across the tristate area. It is slated to open next year, and while its location has yet to be determined, its founders are eyeing Long Island City in Queens.

Those founders, Jared Effron and Griffin Taylor, are lifelong lovers of the sport, lifelong New Yorkers, and lifelong friends who grew up playing against each other in a New York City youth league. Now entrepreneurs, they have “lived, breathed, and eaten sports” since early childhood, as Mr. Effron, the executive vice president of investor

relations at a startup that works with sports teams, put it.

Mr. Taylor “was the worst player” on his N.C.A.A. team, he said, but graduated to working with the late Greg Marius at the Entertainers Basketball Classic summer tournament. “I fell in love with New York City grassroots basketball,” he said, and spent a decade assembling teams for tournaments and, at the highest level, executing brand partnerships between N.B.A. players and Fortune 500 companies. “Every bit of spare time was spent running around the five boroughs assembling teams. I networked with a lot of the who’s who of New York City basketball. I sort of built this unique New York and N.B.A.-centric network.”

“We talked about this 10 years ago,” Mr. Effron said, “but didn’t have enough network and capital to pull this off.” More recently, they met up at a wedding, “and still felt very, very passionately that there was a hole in the market for something of this level in New York.”

For more than 50 years, they told The Star, New York City was the basketball mecca, producing N.B.A. talent and N.C.A.A. Division I scholarships at unprecedented levels. But the city, they said, has become somewhat forgotten in the grassroots and youth basketball landscape. As of 2015, the city was behind states including Delaware and Wyoming in terms of N.C.A.A. Division I scholarships produced per capita. This, they said, is largely due to the lack of a centralized facility to provide youth with full-time access to its resources.

Hence the goal to “give these kids resources and opportunities to reach the level they want,” Mr. Effron said. “We feel strongly about mentoring and giving back.”

“We want to take the best coaches, and also the N.B.A. guys, under one roof to show kids that you can come to this one community hub,” Mr. Taylor said. “The best coaches and role models under one space.”

“The Program is doing amazing things to restore youth basketball in New York City,” Mr. McBride said. “As a Knick, it is easy to get behind that mission. I’ve always heard the Hamptons is a great vibe, and the camp is a great opportunity to experience that vibe while helping further develop the youth.”

For the Program NYC, they plan multiple regulation courts, cardio, turf and weight training, classrooms, locker rooms, gaming rooms, a juice bar, and a retail area. And, of course, top-level coaching and instruction, as well as a network of advisers invested in youth development.

The younger Mr. Smith “is like our third partner,” Mr. Effron said. “He was adamant about wanting to host the Jet Academy,” a summer basketball camp, “which they do all over the country, but he had been dying to do one in the Hamptons. I thought that made a lot of sense because we wanted to get our name there and generate investment buzz.”

“Our doors are open to anyone who loves basketball,” he said. “We want you in our gym if you want to be around basketball.