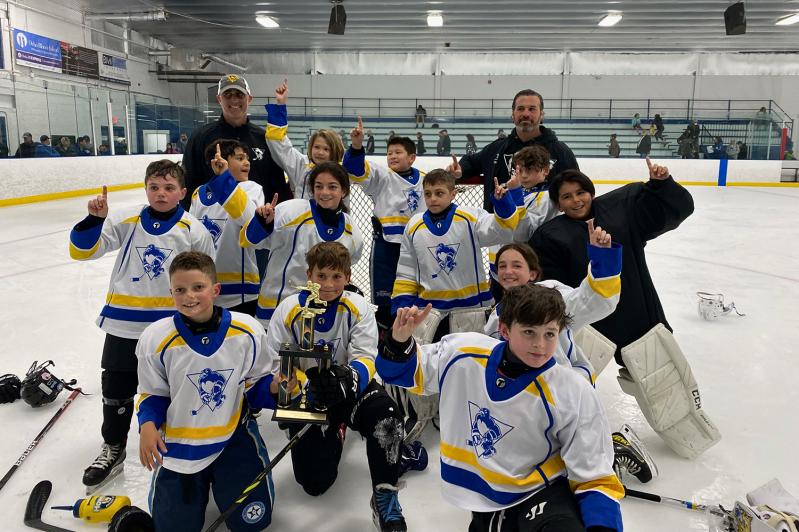 The Southampton Penguins’ under-10 team swept through the opposition at the Lobsterfest tournament in Rhode Island recently.
Chris Minardi
By Jack Graves

Two Peconic Hockey Foundation-sponsored youth ice hockey teams, the under-10s and the under-8s, ended the spring season with fine showings in a regional tournament in Rhode Island recently, a tournament whose games were played on five rinks in the Providence area. The U-10s swept through their six-team Squirt division undefeated, and the U-8s A team — there’s also a B team — was a runner-up.

All of this bodes well for youth hockey on the South Fork, said Chris Minardi, whose son, Cam, centers one of the under-10 Southampton Penguins’ lines.

“At this same tournament last year we didn’t win a game — this year we won all four that we played,” Minardi said.

The under-10s, coached by Jason Craig and Brendan Goldstein, outscored the opposition 39-to-3 all told, defeating the Central Rhode Island Knights 10-to-1, the Lady Spitfires of Foxborough, Mass., 9-1, the Saugerties (N.Y.) Kraken 12-to-0, and, in the final, the Junior Crusaders of Worcester, Mass., 8-to-1. “On paper they looked good, but we beat ‘em bad,” said the elder Minardi.

“I was a little nervous going in,” said Craig. “Last year really was the first competitive one for our kids, but their hard work — they’ve been practicing eight to 10 hours a week since October,” mostly at the Southampton Ice Rink, “has paid off.” Especially in the case of the Penguins’ leading scorer in the tournament, Luka Pisano, a Southamptoner who had “eight or nine goals.”

“Last year, Peconic Hockey had U-8, U-10, U-12, and U-14 teams,” said Minardi. “This year, there are two U-8 teams, the U-10 team I’ve been telling you about, two U-12s, a U-14 team, and U-16 team. This was a prestigious tournament — we were pleasantly surprised by how well our kids did. They’ve got a lot of desire, and their parents have been very cooperative, getting them to practices, to games at rinks in Nassau County and western Suffolk, and to camps.”

Goldstein has been training youngsters in the sport at the Southampton Ice Rink for the past eight years. “This is the result of all those clinics we’ve given.”

When three of the foundation’s youth teams debuted here in January at the Buckskill Winter Club, Minardi said that “the foundation has addressed a need that has gone unmet for basically forever. . . . These kids are on the ice 200 days a year.”

And perhaps they’ll be on the ice even more if the foundation finds a home on the East End for an indoor regulation-size ice hockey rink whose bubble dome and all of its accouterments, including a Zamboni, are stored at the moment in Cranston, R.I.

In the meantime, the players are taking a break until competition begins again in mid-August.