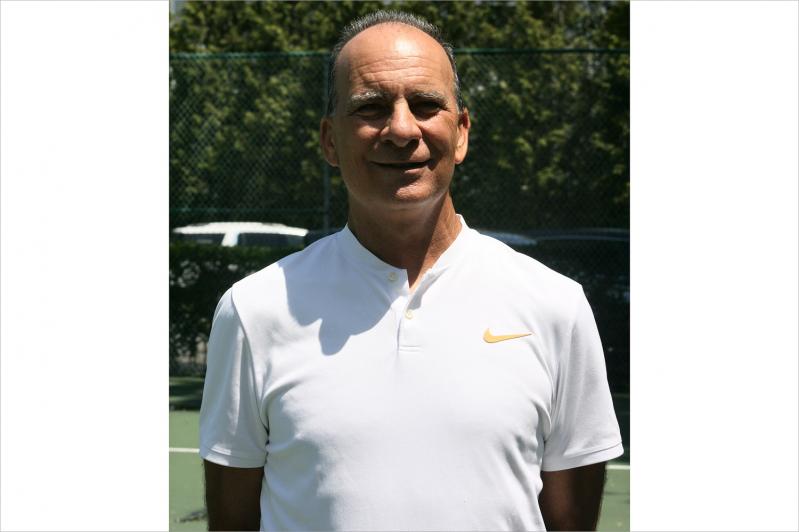 Steve Annacone and his MyHamptonsPro assistants teach at the Baron’s Cove Resort in Sag Harbor, the Southampton Inn, the Shou Sugi Ban House in Water Mill, and on private courts.
Jack Graves
By Jack Graves

There was a time about eight years ago when Steve Annacone was overseeing “a dozen tennis facilities — five in New York, five in Tennessee, one in Georgia, and one in Florida” — but it got to be too much, he said last week on the court behind Baron’s Cove in Sag Harbor.

Since trimming his widespread tennis management business, he’s been much less harried, and, consequently, happier. “If I could have found three or four people like me, people who were on the same page, I could have continued, but I tried to do it all by myself and I just couldn’t. I’m good at it, but I just don’t have the patience for it anymore. So, with MyHamptons Pro, which is basically a concierge tennis instruction and coaching service, I turned to what I like to do, my passion. I like to coach people, which is why I’m working hard at 64, going back to my roots, doing what I like to do. You’re not only teaching, but you keep learning things.”

Unlike most tennis pros, he was good at the administrative end, “but coaching has always been my passion — I was an assistant pro at Mashashimuet Park’s courts when I was 14, and the head pro when I was 18,” said Annacone.

Annacone and several pros he has working for him teach at Baron’s Cove, the Southampton Inn, and at the Shou Sugi Ban House, “kind of a spa” near the Parrish Art Museum in Water Mill. “I can also teach you on your court, or I can teach you on one I have access to in Amagansett.”

When in high school at East Hampton in the mid-1970s, Annacone played on a conference-champion team behind Sandy Fleischman-Richman, a state champion and one of the top players in the country in the 18s, who went on to play number-one at the University of North Carolina before suffering an elbow injury that kept her off the professional tour. Scott Rubenstein, who now manages the popular East Hampton Indoor-Outdoor Club in Wainscott, was the team’s number-three. Fleischman-Richman, Rubenstein, and Annacone would get ice cream at the long-gone Snowflake on the way to Amagansett and “get to the matches with about five minutes to spare with everyone — Tony Minardi was our coach then, John Goodman was his assistant — wondering where we were.”

When told that Rubenstein used to tell his basketball teammates that Fleischman-Richman played ahead of him because her last name came before his in the alphabet, the interviewee said he could have said that too.

Annacone went to the University of South Carolina, but his college tennis career was hindered by a broken foot, a fact that has further heightened his regard for Rafael Nadal, who recently won the French Open despite being plagued by a foot injury that rendered one of his feet numb during the matches he played.

Speaking of injuries, Annacone’s younger brother, Paul Annacone, a Tennis Channel commentator, developer of young talent in southern California for the U.S.T.A., and one of Taylor Fritz’s coaches, has had trouble with his back and his feet.

“I think I can beat him now,” said Steve, who coached and managed his brother during Paul’s seven years on the world professional tour, beginning with a dramatic run in June 1984 that spanned three rounds of qualifying and five in Wimbledon’s main draw.

He, himself, had played in pro tournaments early on, Annacone said. “You used to be able to go out and play — there were open sign-ups. But it’s so much harder now. There were 1,500 ranked men in the world when I played. Now, there are more than 5,000, and just as many women. You have to have some type of standing now to even get into the qualifiers. I played in an A.T.P. event in Basel, Switzerland, an indoor tournament with 10,000 spectators. I played Claudio Mezzadri, a Swiss who ended up in the top 100. I think I started his career. I couldn’t move I was so scared. . . . There are 17 million people in the world who play tennis at least 10 to 12 times a year. That number is up 25 percent since Covid,” one good thing to come out of the pandemic, he said.

For the past four winters he has taught and coached in Tucson. “For two years, I was the women’s assistant coach at the University of Arizona. I’d never done any college coaching before, and it was nice to know you were making an impact. In college, coaches can come onto the courts to talk to their players, as long as you ‘don’t interrupt the flow of the game.’ Essentially, you want them to deal with adversity, to coach themselves, which is what Nadal does. Then Covid happened, in March of 2020, and that stopped everything. One person on the team got it, then everyone did — four to six out of the eight players. You didn’t know from day to day if you could practice, or play. It didn’t look promising, so I went over to the Ventana Golf and Racquet Club where I’m the assistant to the tennis director.”

Asked if he played golf, Annacone smiled. “I’ve tried to. As hard as tennis is, golf is harder. I could shoot in the 80s, but I could never break 80. The mental aspect is the same as in tennis. But it takes a long time, and I just don’t have five hours.”

Last winter, Annacone and Miguel Coelho, a former protégé of Sergi Bruguera, a two-time French Open champion who coaches Marin Cilic, began overseeing a junior elite tennis (JET) program at Tucson’s Jewish Community Center. “We started in January with five, and in May we had 25. They’re good young players.”

Wherever his career has taken him, Annacone has always made sure to include New York and Florida in his purview because his father, Dominic Annacone, 86, a former Sag Harbor School District superintendent, lives in East Hampton, and his mother, Cathy, who’s also 86, lives in Naples, Fla.

His mother, he said, is “a bionic woman” — hip replacements, shoulder replacements, a double mastectomy, a kidney removed . . . you name it.” When, after breaking a femur bone in a fall, and couldn’t walk, she asked him if he thought she’d ever play tennis again, he promised they would. And they did.

“Paul and I kid her all the time, and she’ll say, ‘What can I tell you? I’m amazing. . . .’ This will tell you something about her: When Paul was at Wimbledon that year, in ’84, I was called up to do some radio commentary, and someone, I forget who, said did I know that our mother was there? She had flown over, she had no tickets, but, somehow, she talked her way in. That personifies my mom.”