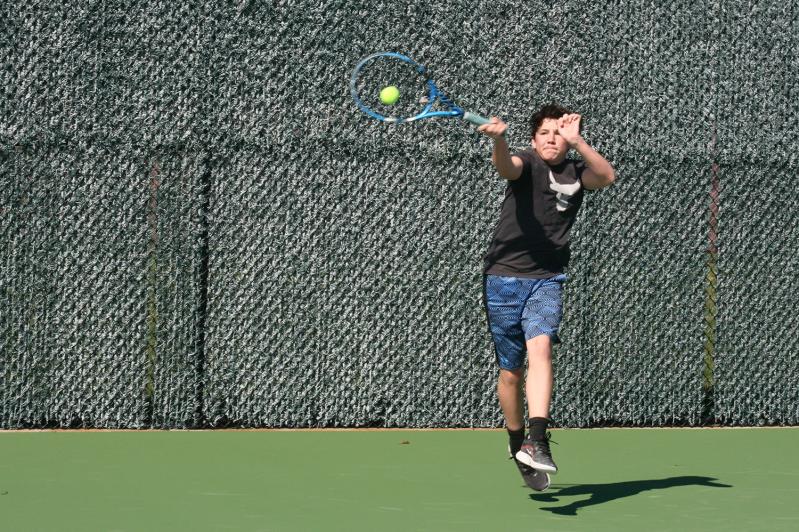 Henry Cooper, an eighth grader who has been alternating between second and third singles with East Hampton High’s boys tennis squad, teamed up with his older brother, Nick, to win 6-0, 6-1 at first doubles over Longwood on April 28.
Jack Graves
By Jack Graves

For the first time in a month, since the spring season began, on April 28 East Hampton High School’s boys tennis team played a home match, on redone courts to which the final touches had been added just a day or two before.

Given the court work, which began last fall, the Bonackers, who are coached by Kevin McConville, a top local teaching pro, had played all their matches away until last Thursday’s, with Longwood, a team McConville’s young but talented crew devoured 7-0, almost as quickly as they had a pizza pie that arrived an hour into the pre-match practice session.

The win improved East Hampton’s record to 10-0, this despite the fact that several players had been missing from his lineup in the early going because of injuries. Aside from Chris Pilarski, who’s still rehabbing a sore shoulder, McConville had a full lineup last Thursday, a lineup that Max Astilean, a much-improved junior left-hander, heads.

It was the first day back in a while for Nick Cooper, a sophomore who has been rehabbing a groin injury. Cooper began the year at number-two singles, but played first doubles in the Longwood match with his brother, Henry, an eighth grader who has alternated between second and third singles. The pair won easily, as did all of their teammates that windy, gusty day.

McConville had his charges arrive at 3 to warm up for the match, which didn’t begin until around 5, and a good thing too for the wind was especially strong that day, blowing the length of the five singles and three doubles courts.

“Often it’s at an angle, heading up toward the softball diamond, but today it blew straight across,” said the coach, who wanted to make sure his players, who have been practicing indoors for the past month at the East Hampton Indoor-Outdoor Club, were accustomed to the curvy movement of the balls. Frequents gusts added to the challenge.

The singles lineup comprised Astilean at first singles, Kiefer Mitchell, a freshman, at two, Jagger Cohen, an eighth grader, at three, and Armando Rangel, a junior, at four. At doubles were the Coopers at one, Cameron Mitchell and Miguel Garcia, both sophomores, at two, and Dane Schwalbe and Carlos Quintana, who are freshmen, at three.

The Bonackers were to have played 9-1 Miller Place here on May 2, though McConville said he didn’t think his charges would have any trouble with the Panthers. Ward Melville, on the other hand, the East Division’s “heavy favorite,” which is to play here on May 5, was, he said, another matter.

The Ward Melville match, the coach added, would give Astilean a chance to avenge himself on Aaron Burstyn, who ousted him from the county tournament in the quarterfinal round last year. Burstyn went on to finish third.

Also, East Hampton was to have played at Patchogue-Medford on May 3. William Floyd is to play here on Monday, May 9, and the team, arguably the best tennis team here since Matt and Brian Rubenstein played in the early 2000s, is to wind up the regular season the next day at Eastport-South Manor.