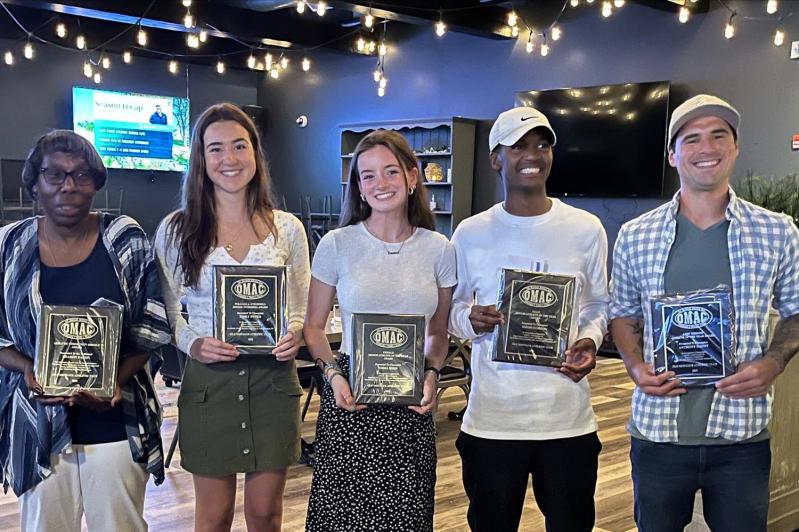 Three East Hampton High School senior student-athletes, Amari Gordon, Emma Hren, and Emily Dyner, received $1,000 scholarships, and two adults, Anthony Daunt, an ultramarathoner, and Sharon Bacon, who has helped oversee the Kendall Madison Foundation and its events here since the death of her son, Kendall Madison, in 1995, were honored by the Old Montauk Athletic Club at the Clubhouse in Wainscott last Thursday night.

Gordon and Evan Masi, his co-president of the high school’s student body, led East Hampton’s boys cross-country team to back-to-back undefeated seasons recently, and to a fourth-place finish in the county Class B meet at Sunken Meadow in the fall, a challenging race at which he ran his best time. His coach, Kevin Barry, credited him and Masi with having done much to revive the program during the coronavirus pandemic. Barry, OMAC’s vice president, said later that he had left the voting on the club’s senior male athlete of the year up to his fellow board members, and all of them had “said, ‘Amari.’ ”

Gordon, who was named to cross-country’s second all-county team in the fall, and to the county’s all-academic team, intends to major in marketing at Penn State.

“He’s really fast and really smart,” said Barry, who, struck by his stamina, recruited Gordon to cross-country after seeing him play soccer in his freshman year.

Craig Brierley, who coaches East Hampton’s successful girls swimming team, said that if he were to describe Emily Dyner, a county meet competitor in the 200 medley relay, which she anchored, in one word “it would be ‘kindness.’ Enthusiastic and loving, she was always there to take care of her teammates, the epitome of our culture of love and hard work. . . . Her leadership made my job so much easier.”

The fourth Bill O’Donnell swimming award recipient, Dyner also swims for the Y.M.C.A. East Hampton RECenter’s youth swim team, the Hurricanes, and is a town lifeguard. She intends to major in government at Cornell University.

“I think of Billy often,” Brierley said of the late triathlete for whom the award is named, “he’s always there in our hearts.”

A four-year girls cross-country veteran who began running competitively in middle school, Emma Hren, the club’s senior female athlete of the year, has been prevented by a quadriceps injury from hurdling and running with the girls track team this spring. In her sophomore year, East Hampton’s girls cross-country team, coached by Diane O’Donnell, was a county champion. A dancer and a lifeguard, too, Hren is to matriculate at James Madison University in the fall.

Sharon McCobb, OMAC’s president, a long-distance runner herself, said she couldn’t imagine facing the grueling Ultra tests that Anthony Daunt, the club’s athlete of the year, has faced. The 30-year-old was first featured on these pages in December 2018 after topping the 25-to-29-year-old age group in the 24-hour Spartan Ultra world championships in Hverageroi, Iceland.

He said at the time that it was probably the hardest thing he’d ever done. “We started at noon and had to finish by noon the next day. There were only three hours of daylight. The rest I did with a headlight — seven 6.6-mile loops with 25 obstacles. There was snow on the mountain, 1,400 feet of elevation. You ran up to the top on every lap, went across a ridge, and then down a steep, slippery slope, hanging on to ropes that were nailed into the ground.”

He placed fourth in the world in Sweden in 2019, but with a 2-year-old at home, Daunt has had little time to squeeze in another Moab 240 or seven marathons in seven days, though he said he did do a 30-miler not long ago, and ran in the Bridgehampton half-marathon on May 7.

Sharon Bacon, reluctant to take any credit for herself, accepted the club’s community service award on behalf of the Kendall Madison Foundation’s board of directors. Jennifer Fowkes, who introduced her, said that the foundation had contributed more than $200,000 to student-athletes here in the past quarter-century, and that all Kendall Madison scholarship recipients over the years save one had graduated from college.

The annual $10,000 ($2,500-a-year) scholarship, which stipulates that the winner serve as a mentor to youth, as Kendall Madison did, used to be given to a male and female East Hampton High School senior, though now it is given to one senior per year.

The Old Montauk Athletic Club’s next event, the Montauk Mile, is to be contested on June 12, and “we’re trying to resurrect the Great Bonac 10K in Springs on Labor Day,” McCobb added.