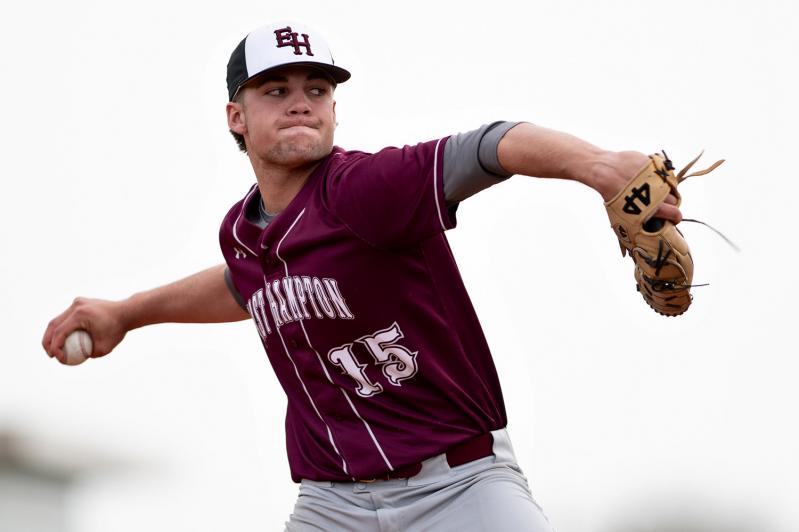 Jack Dickinson held Sayville scoreless through the first four innings of a high school baseball game played here on May 3, but had to come out in the top of the fifth with an oblique muscle injury. Will Darrell, who relieved, pitched four scoreless innings as well, until giving up a grand slam home run in the top of the ninth.
Craig Macnaughton
By Jack Graves

Last Thursday was a very good one sportswise at East Hampton High School, a day in which Bonac’s boys tennis team and its baseball team engaged in riveting struggles with league champions — Ward Melville in tennis’s case and Sayville in baseball’s.

Ward Melville eked out a 4-3 win, leading the tennis team’s coach, Kevin McConville, to think his crew might well defeat the Patriots should Ward Melville and the Bonackers meet again in the postseason. Ward Melville’s coach, Erick Sussin, told McConville in a text message that he felt lucky to have come away with a win.

The baseball game, during which Jack Dickinson and Will Darrell pitched for East Hampton, was scoreless through seven innings. The Golden Flashes won it 4-0 as the result of a grand slam home run in the top of the ninth. Vinny Alversa, East Hampton’s coach, afterward congratulated his players, who had committed eight errors in an 11-2 loss at Sayville the day before, on their performance. “Yesterday wasn’t us,” he said. “Today was a good baseball game that could have gone either way.”

Dickinson started on the mound, but had to come out in the top of the fifth with an oblique muscle injury that may sideline him for a bit. Darrell, a big left-hander who came in without warming up, proceeded to pitch four scoreless innings before giving up the grand slam.

In contrast to game one, the Bonackers turned in some dazzling plays in the field that day, chief among them a 5-3-5 double play that shut Sayville down in the fifth, a fine backhanded stop and throw to first by the shortstop, Hunter Eberhart, that prevented the Golden Flashes from scoring in the sixth, and a rifled strike by the freshman catcher, Carter Dickinson, that cut down a would-be base stealer at third in the top of the ninth.

The erasure at third was followed, however, by a double, a full-count walk, a tantalizing infield bloop that fell to the ground between the third baseman, Avery Siska, and Eberhart, and then the grand slam over the left-field fence.

East Hampton went down in order in the bottom of the ninth, but still, as Alversa was to say, it had been a great game. The teams were to have played here Friday, but rain caused it to be put over until Monday, which presumably meant that Colin Ruddy, the game one starter, would be ready to pitch again.

“When Colin came out in the fifth, the score was 6-1, but he’d only given up one earned run,” Alversa said when questioned about the lopsided loss at Sayville on May 4.

Back to the tennis showdown with Ward Melville, which ought to end the regular season at 16-0, East Hampton, which ought to finish at 15-1, won at fourth singles and at second and third doubles. Third singles went down to a third set, as did first doubles.

Max Astilean, at one, couldn’t solve Aaron Burstyn, a fellow left-hander, losing 6-1, 6-4, though he was right there in the second set. McConville gave full credit to the 5-foot-5-inch Burstyn for attacking Astilean’s serve. “He’s an excellent player . . . it took guts to move forward on a serve like Max’s and take the ball on the rise, rather than stay back 12 feet off the baseline, but he did, and returned great the entire match. You can counter an attacking returner with body serves, but Max didn’t serve well that day — he knew it. That’s why he lost.”

As for Burstyn, “Hats off to him — he deserved it.”

Usually the doubles matches are played on the three courts nearer to the high school, but McConville moved them onto the five courts where the singles matches are usually played so he could keep an eye on how his first singles and first doubles players, Chris Pilarski and Kiefer Mitchell, were doing. It was the first match since March 25 for Pilarski, who has had a long-term shoulder problem that probably will require surgery. But sore shoulder or no, “he’s an asset,” said McConville, who was planning to rest the Pierson sophomore in this week’s league-ending matches with William Floyd, Eastport-South Manor, and Central Islip.

The seeding meeting for the Division IV individual tournament, in which Westhampton Beach, Shoreham-Wading River, Southampton, Hampton Bays, Center Moriches, and East Hampton singles players and doubles teams are to vie, is to be held today. That tourney, from which the top eight singles players and top four doubles teams are to advance to the county individual tournament, is to be played tomorrow, Saturday, and Monday at William Floyd High School in Mastic Beach.

East Hampton can expect to be seeded second in the county’s East Division tourney, behind Ward Melville, McConville said. Ward Melville recently bageled the Hurricanes, a team that, “because of a snafu,” East Hampton did not play this spring. Given the Ward Melville-Westhampton result, “we had to win at least two matches against Ward Melville to get a higher seed than Westhampton.”

Also last week, East Hampton defeated Miller Place 7-0 in a match that was moved from the high school on May 2 to outdoor Har-Tru courts at the East Hampton Indoor-Outdoor Club, where Bonac’s team has been practicing indoors for a good part of the season while the high school courts were being redone. Miller Place had lost only to Ward Melville going in, but was no match, McConville said, for East Hampton.