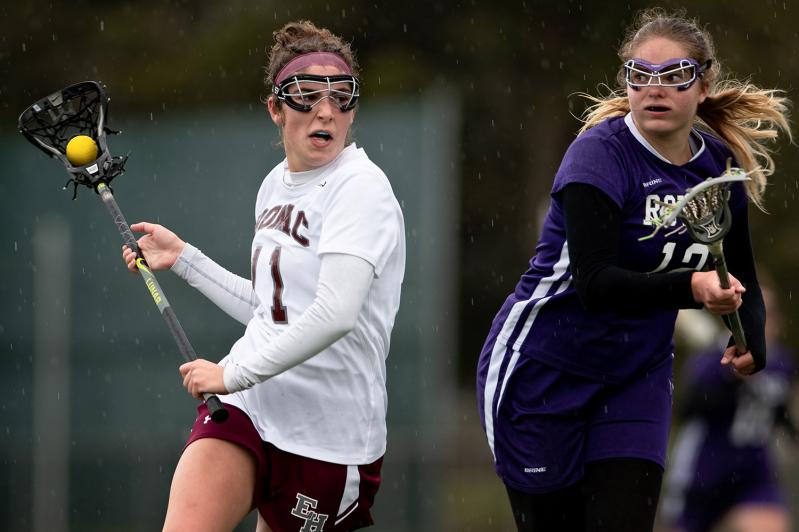 Ella Bistrian and her East Hampton High School girls lacrosse teammates let Port Jefferson get too far ahead in the first half on Saturday and paid for it, losing 15-9 in the end.
Craig Macnaughton
By Jack Graves

Yani Cuesta, East Hampton High’s girls track coach, encouraged her charges, who’d been in an invitational at Westhampton Beach the day before, to support the May Day 5K here, but forbade them to run in it, knowing they’d be sore the next day, May 2 at East Islip, League V’s most powerful team.

“It’s not so much the next day, but the second day, 48 hours after, that the soreness kicks in,” the coach said by phone over the weekend.

Then, to boot, there was an hour-and-a-half bus trip to look forward to, and some particularly nasty weather, rainy, windy, and cold. Plus the fact that the bus arrived late, shortening the warm-up time.

All that said — and despite the fact that East Islip won 85-47 — Cuesta said she was “super proud” of her girls’ performances, many of them personal records.

The high jump and pole vault were scratched, but in the long jump Leslie Samuel placed second in a personal-best leap of 15 feet, 11 1/4 inches, a foot farther than she had jumped this spring. While East Hampton was out of the money in the triple jump, Casey Stumpf, who was fifth, and Lyla Wilson, who was sixth, P.R.’d. East Hampton’s Becca Trowbridge and Kristina Barrata went one-two in the discus, and Madelyn Cohen was second in the shot-put, with a personal-best heave of 22 feet 11 inches.

Cuesta, whose team didn’t get back here until 9:20 p.m., said she was happy, given the short warm-up time and wretched weather, to come away from East Islip with no serious injuries.

She said she had been hoping to go to another invitational last weekend at St. Anthony’s High School, but bad weather caused it to be canceled. She planned to take a number of her competitors to the Don Bohlinger memorial invitational at West Babylon tomorrow, she said, adding that the F.A.T.(fully automated timing) times from invitational meets, rather than the hand-held times from dual ones, were used by the county to determine the seedings in postseason meets.

Hauppauge, whose record was 3-1, the same as East Hampton’s, was to have contested a meet here yesterday.

East Hampton’s Ava Tintle was the first to score in last Thursday’s game here with Glenn, but it was 7-1 John Glenn before the Bonackers were to score again. Goals by Tintle, Emma McGrory, and Claire McGovern pulled East Hampton to 7-4 with 40 seconds left to play in the first half, but the visitors made it 8-4 just before the buzzer sounded — a lead that Jessica Sanna’s players were unable to overcome in the game’s remaining 25 minutes.

“We’re definitely improving,” the coach said in an email Monday morning, “but we still have a lot of work to do.”

The Southampton-based boys team, the Islanders, which has players from all over the South Fork, including half a dozen from East Hampton, defeated North Babylon 14-3 last Thursday, after having lost 19-3 to Northport, Division 1’s top team, on May 2. The win improved the Islanders’ record to 5-7 in league play.