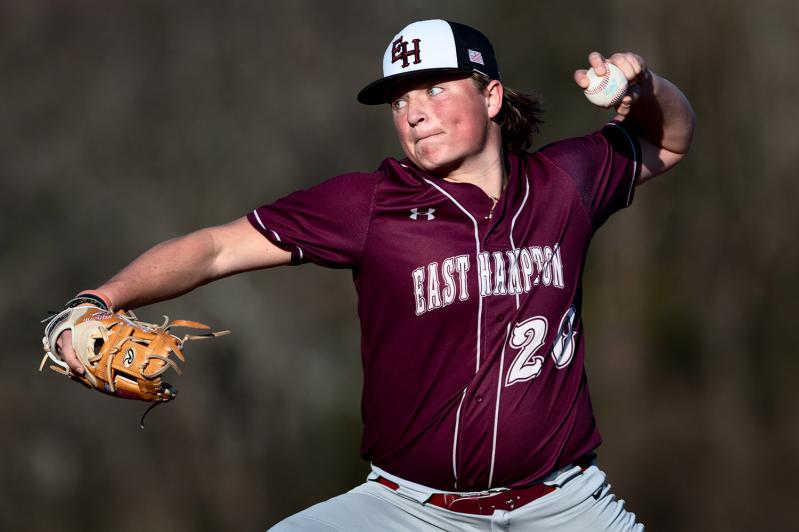 Will Darrell was one of four East Hampton pitchers who blanked Southampton in a scrimmage here Friday. He recorded six strikeouts in the two innings he worked. Colin Ruddy struck out six as well, Jack Dickinson struck out five, and Hunter Eberhart fanned three. 
Craig Macnaughton
By Jack Graves

Spring began for a few of East Hampton High School’s teams last week, and the results were good all around.

Meanwhile, the varsity baseball team on Friday trounced Southampton 12-0 in a scrimmage during which Colin Ruddy, Jack Dickinson, Will Darrell, and Hunter Eberhart took turns pitching. Vinny Alversa, the head coach, and his assistant, Henry Meyer, think the playoffs are within reach simply given the strength of the above-named pitchers, who, all told, struck out 20 Mariners over the course of seven innings. Ruddy, a George Washington University recruit, struck out six, Dickinson, five, Darrell, six, and Eberhart, who pitched the final inning, three.

It’s not just the pitchers, though: The Bonackers can also hit. “The big blow,” Alversa said afterward, “was Carter Dickinson’s three-run homer in the first, though we had other hits, scattered throughout the lineup.”

The boys tennis team also saw action in the past week, defeating Sachem East 6-1 in its league opener. It would have been 7-0 had Nick Cooper, East Hampton’s second singles player, not pulled a groin muscle in the first set, forcing him to retire with the score 4-2 in his favor.

Kevin McConville, the coach, who thinks this team can vie for the county championship, said he expected Cooper to be out for a couple of weeks, which means he’ll have to do some shuffling. Despite that, the team ought to remain strong, he said during Sunday evening’s practice at the East Hampton Indoor Tennis club, even though most of his 12 players — nine of them new to him — are underclassmen.

“I don’t see anyone matching up with us in doubles,” said McConville, who has Cameron Mitchell, a sophomore — also a transfer from Ross — and Chris Belarski, a Pierson sophomore, at one; Jagger Cohen, an eighth grader, and Dane Schwalbe, a Pierson freshman, at second doubles, and Armando Rangel, a junior, and Carlos Quintana, a freshman, at three.

Astilean, Nick Cooper, and Rangel are returnees. Astilean, who has picked up his game considerably in the past few months, was all-county last season, as was Nick Cooper.

The team was to have played a match at Connetquot Tuesday and is to play at Comsewogue today. “We’re still waiting for our renovated courts at the high school to be painted — that’s why we’re playing so many matches away early in the season,” said the coach.

Ward Melville is the preseason pick to win the league, with East Hampton ranked second, and Westhampton Beach third, he said.

Sanna, the girls lacrosse coach, said she and her assistant, Lisa Farbar, had decided, given the huge turnout, to field two junior varsities this spring, one of which is being coached by Joe DiGirolomo and Jenna Pirro and one by Robyn Mott.

Asked what the lineup looked like, Alversa said, “Colin will play first base when he’s not pitching. When Colin’s pitching, Carter will play first. Hudson Meyer or Hunter Eberhart will play second. Avery Siska, Hanson, and Eberhart can play short, and Jack or Avery will play third. Either Danny Lester or Mike Locascio will be in left, Will Darrell or Mike will play center, and as for right field, take your pick. It could be Calum Anderson, Egan Barzilay, or Nick Schaefer.” Nico Horan-Puglia is the catcher.

While East Hampton wasn’t quite two deep in each position, “We’ve got a lot of versatile players,” said Alversa, whose team was to have begun the league season Tuesday at home with Harborfields, the first of a three-game set. The other games are scheduled for today and tomorrow.

“Harborfields will be a good test — they’ve had a fairly long run in the playoffs,” said East Hampton’s coach, who, with Meyer, has been rebuilding East Hampton’s program in the past few years. “When it comes to the playoffs, we’re trying to end a 13-year drought,” Alversa added.

Mashashimuet Park's History and Future
A Conference for Young People to Create Solutions
Get Outside, Get Moving
END_OF_DOCUMENT_TOKEN_TO_BE_REPLACED