Six swimmers will compete in nationals next week 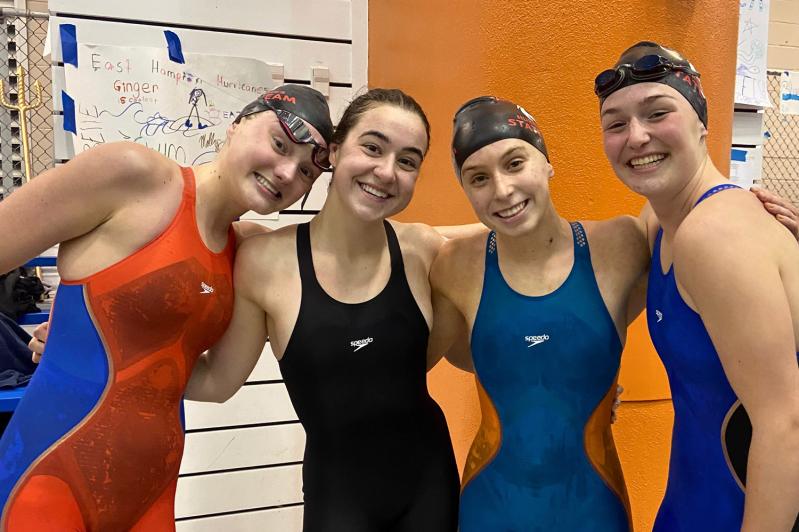 Summer Jones, Emily Dyner, Jane Brierley, and Cami Hatch, state champs in the 15-19 girls 200 medley relay, are to represent the state-champion Hurricanes in the Y.M.C.A. nationals in Greensboro, N.C., next week, as are Daisy Pitches and Lily Griffin.
Angelika Cruz
By Jack Graves

Last weekend, for the first time in its 19-year history, the Hurricanes, the Y.M.C.A. East Hampton RECenter’s 8-to-19-year-old swim team, won a state championship, handily defeating 43 other Y teams from around  the state at the Nassau County Aquatic Center at Eisenhower Park in East Meadow.

This time the Hurricanes bested Flushing, Cross Island, and Rye, the three teams that finished ahead of Tom Cohill’s squad in 2019, the last time that a Y state meet was  contested.

Following the 2019 meet, Cohill, who has coached the Hurricanes virtually since their inception in 2003, said that “pound for pound” his team, which had fewer entrants than the three top teams, was the best in the state. “Now, I no longer have to qualify that,” he said Monday morning. “We are the best.”

The Hurricanes, who are also coached by Angelika Cruz, Sean Knight, Sean Crowley, and Eugene DePasquale, did exceedingly well in all age divisions, spanning the 9-10s and 15-19s.

Just about everyone had personal records, said Cruz, who provides detailed accounts of all the Hurricanes’ meets.

“Everyone stepped up — everyone did the best they could,” said Cohill.

The victorious team of 54 girls and boys was treated to a siren-wailing fire department escort from Main Beach to the Y.M.C.A. East Hampton RECenter on its return at around 8:45 p.m. Sunday. “People were cheering — it was fantastic,” Cruz said.

As a result of their performances at the state meet, six Hurricanes —  Cami Hatch, Jane Brierley, Summer Jones, Emily Dyner, Daisy Pitches, and Lily Griffin — are to compete in the five-day Y nationals in Greensboro, N.C., starting on Monday.

Hatch, Brierley, Jones, and Dyner won the 15-19 girls 200-yard medley relay race in the national-qualifying time of one minute and 49.58 seconds, eclipsing the Hurricanes’ record that had been set in that event by Julia Brierley, Maggie Purcell, Sophia Swanson, and Caroline Oakland in 2018.

Cohill thanked the Y.M.C.A. of Long Island “for letting us get back in the pool at the end of July in 2020,” and thanked the East Hampton Y’s aquatics director, Sondra Vecchio, for her support.

Cruz said that the swimmers were cheered on at the Aquatics Center “by the better part of 100 spectators from here. This was the first meet where there were no restrictions, period. It was the first time in three years that spectators were allowed. Most of the parents came.”

Cohill said he didn’t know what the final team tally was, “but we were the dominant team, by far.”

“We’d like to thank all the parents who got their kids to practice daily,” Cruz said in one of her emailed accounts. “We have some of the greatest parent support, which is another reason why we are the STATE CHAMPS!!!”

Mashashimuet Park's History and Future
A Conference for Young People to Create Solutions
Get Outside, Get Moving
END_OF_DOCUMENT_TOKEN_TO_BE_REPLACED