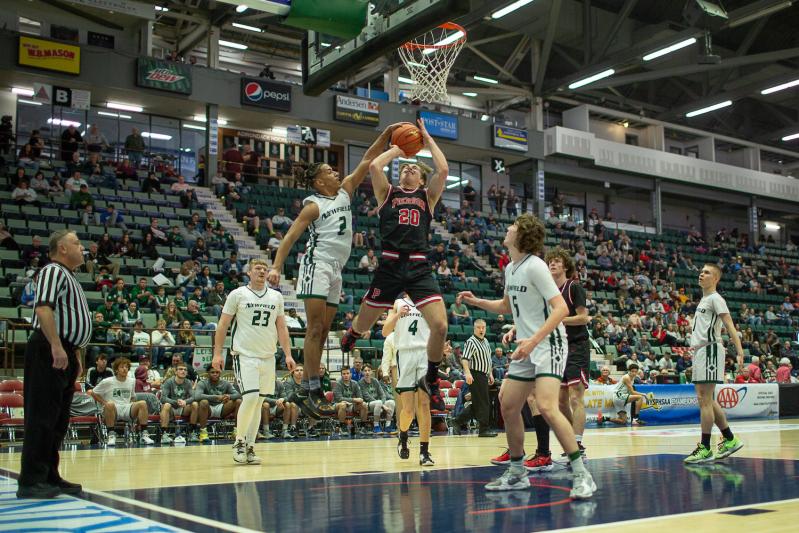 Despite the loss, Pierson's Cecil Munshin "played his best game ever," said his mother, Lindsay Morris, and was awarded All Tournament for this efforts.
Lindsay Morris
By Jack Graves

Having got off to a slow start in Friday’s state Class C semifinal in Glens Falls, the Pierson High School boys basketball team came on strong in the second quarter, erasing an 11-point first-quarter deficit and taking a 34-30 lead over its upstate opponent, Newfield, into the halftime break.

The Pierson Whalers led by 9 points thanks to a 3-pointer by Dan Labrozzi early in the fourth quarter, but their Section IV opponents wouldn’t go away. It was a 2-point game, at 58-56 Whalers, with a little more than three minutes to play, but several Pierson turnovers later, it was 62-60 Newfield.

There was a minute and a half to go at that point. Pierson came up with a steal under its basket, but, following a timeout, a long pass from Wilson Bennett overshot Cecil Munshin, who caught up with the ball as it headed out of bounds and backhanded it into play, unfortunately into the hands of a Newfield player. Jalen Hardison, the Trojans’ point guard, was subsequently fouled at the other end, but there was no harm done as he missed the front end of the one-and-one. In the ensuing struggle for the ball, Bennett, Pierson’s high-scorer, was fouled and made both ends of the one-and-one, tying the score at 62-62 with 36 seconds left to play.

Newfield came down, and as the seconds ticked off, worked the ball around with Whaler hands in their faces until Zach Taylor snuck in unmarked, and, with seven seconds remaining, banked in a layup that treated the upstaters to a 64-62 lead.

Pierson’s coach, Will Fujita, called a timeout, and when play resumed, Bennett, facing Newfield’s customary full court press, threw long for Labrozzi, but the Trojans' Derek Pawlewicz, who intercepted, was subsequently fouled as he headed toward Pierson’s basket, where, with five seconds left, he sank both ends of a one-and-one, putting the game out of the Whalers’ reach, at 66-62, which proved to be the final score.

It was only the third loss of the season for a fine Pierson team, whose only other losses came at the hands of Southampton, a Class B school. A Pierson boys basketball team has not advanced this far in the state tournament since 1978.

Mashashimuet Park's History and Future
A Conference for Young People to Create Solutions
Get Outside, Get Moving
END_OF_DOCUMENT_TOKEN_TO_BE_REPLACED