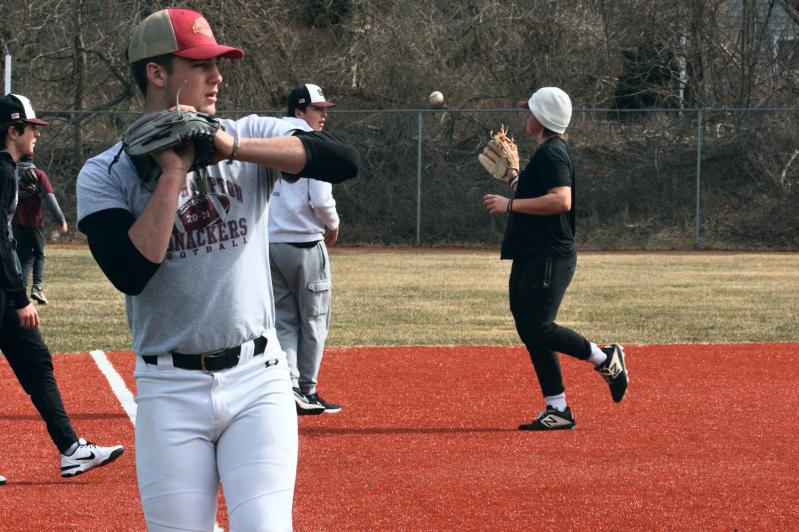 Jack Dickinson and just about all the players from last year’s East Hampton High School baseball team are about to take the field again.
Jack Graves
By Jack Graves

“All of our coaches, who all work hard, are returning, which is good because the nearer to normal we can get the better it will be for everyone,” Joe Vas, the East Hampton School District’s athletic director, said Friday. “The last two years have been hard, but we’ve managed to provide as many opportunities as possible, and now we’re pretty much back to normal operating procedure.”

The school’s eight tennis courts have been entirely resurfaced — the work was begun in the fall — though they’ll not be painted until a stretch of above-50-degree weather arrives. “We’re hoping for April.”

Meanwhile, the team, which its coach, Kevin McConville, thinks may turn out to be the best East Hampton’s had since its championship seasons in 2003 and ’04, is to practice at the East Hampton Indoor Tennis Club. Short-set tryouts beginning at 2-2 are to get underway there Monday. “We’ll have no seniors, but I know I’ve got four really good singles players and I expect to have three eighth graders playing doubles. Originally, we were to have had eight home and eight away matches, but the way things stand now, since the courts have yet to be painted, we’re to have 11 away and five at home.”

It was surprising, McConville said, that East Hampton is not to play Westhampton Beach, which perennially fields a strong team, this spring. “Us, Ward Melville, and Westhampton ought to be the top teams in our 19-team East Division. The West Division, with Commack, Half Hollow Hills East, Half Hollow Hills West, and Harborfields, is really strong. The East Division winner will play the West Division winner in the postseason, and that winner will play the Nassau winner.”

Vinny Alversa, East Hampton’s varsity baseball coach, said during an outdoor practice Saturday morning that he expected his team to be “competitive.” The team went into a bit of a swoon last year because of Covid-caused scheduling constraints — “we played three games in a row at one point, at Harborfields, East Islip, and Miller Place” — and overworked starting pitchers.

“We’re going to be good — I’m excited,” Alversa said by phone Sunday night. Just about the entire team is back, save for Charlie Condon, who moved to California, and Drew Salamy,

who graduated. Ruddy and Nico Horan-Puglia, the catcher, were named to the 2021 all-league team, though Alversa said Ruddy should have been all-county. “We have the pitching,” the coach said. “It’s going to come down to who can put the ball in play.”

As of Friday, 12 East Hamptoners had signed up to play for the Southampton-based South Fork Islanders boys lacrosse team, which is open to players from five schools. “Southampton is a central location,” said Vas, “when you take all the schools into account — Ross, Pierson, Bridgehampton, East Hampton, and Hampton Bays.”

There was a question last summer as to whether the South Fork Islanders would be able to field a junior varsity this season, but apparently, with the recent inclusion of Hampton Bays, that’s no longer an issue. All the spring teams would have jayvees, Vas said.

“Oh, and one more thing,” said Vas. “The softball scoreboard, which broke last year, finally has come in — after a year and four months.”

Mashashimuet Park's History and Future
A Conference for Young People to Create Solutions
Get Outside, Get Moving
END_OF_DOCUMENT_TOKEN_TO_BE_REPLACED