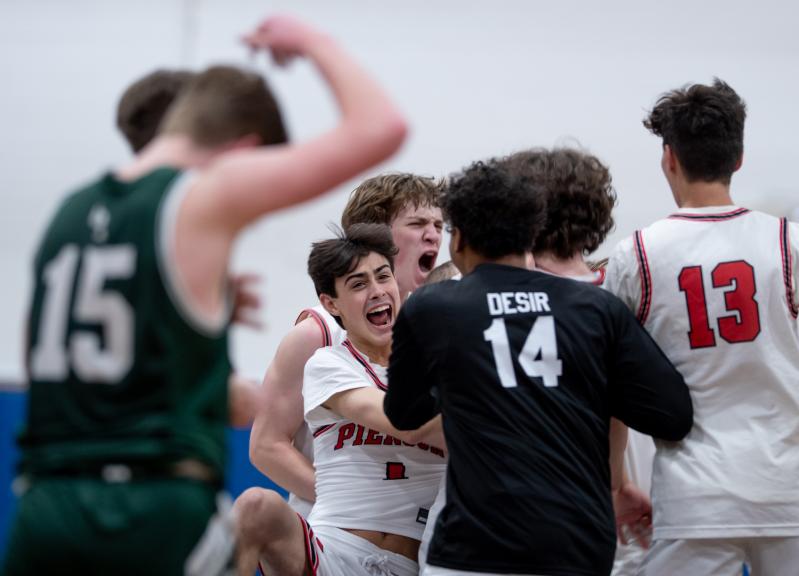 For most of the Class C Long Island championship playoff game at Centereach High School Wednesday afternoon, the Pierson Whalers trailed Carle Place, Nassau’s class C champ, but then, wonderful to tell, Cecil Munshin hit a 3-pointer that tied the score at 43-43 with five and a half minutes to play, and, following a Carle Place turnover, put back a miss that treated Pierson to its first lead since the fast-paced contest’s opening moments.

Amid the din, a layup by the Frogs’ Ryan Driscoll knotted the score again, but Munshin, from the right corner, drained another 3 that the Sag Harbor school’s bleacherful of fans greeted with roars.

Carle Place’s senior point guard, Rocco Zannino, who could hit 3s from anywhere on the floor — he finished with six — then drew a foul from Leo Butler, but missed the front end of the one-and-one. Wilson Bennett, as he did so many times that day, came down with the rebound and sank a pull-up jumper at the other end, extending the surging Whalers’ lead to 50-45.

With three minutes left, Dom Mancino, who had come off the bench, stole the ball and banked in a layup for 52-45. But the Frogs weren’t cowed: Subsequent 3-pointers by Christopher Colaciello, with two and a half minutes to go, and by Zannino made it a 1-point game, at 52-51, with 1:10 left on the clock.

Bennett, who was to finish with a game-high 25 points, came up big again, when, with 30 seconds left, he hit an eight-foot jumper in the paint for 54-51.

Following a Carle Place timeout, Will Fujita, Pierson’s coach, called one of his own to make sure that Zannino would be covered man-to-man. When play resumed, Zannino, with a hand in his face, let one fly from long range, but missed. However, a miscue by Mancino on the subsequent inbounds play turned the ball over, giving the Frogs another chance to tie. The inbounded ball made its way this time to Ryan Leary, whose 3-point bid rolled around the rim and out.

As the seconds ticked away, Pierson inbounded the ball successfully three times, once to Munshin and twice to Bennett, who, from the free-throw line in the last half-second, sent Pierson home a 55-51 winner. Reportedly, it was the first Long Island championship the Sag Harbor school had won in boys basketball since 1978.

Pierson is to play Alexander Hamilton in the state Class C regional final at Yorktown High School in Yorktown Heights on Sunday at 4 p.m. (rescheduled from Saturday because of the snowstorm). The winner of that game will advance to the state Final Four in Glens Falls, whose Class C games are to be played on March 18 and 19.

This article has been updated to reflect that Pierson’s game on Saturday has been moved to Sunday at 4 p.m. because of the weather.