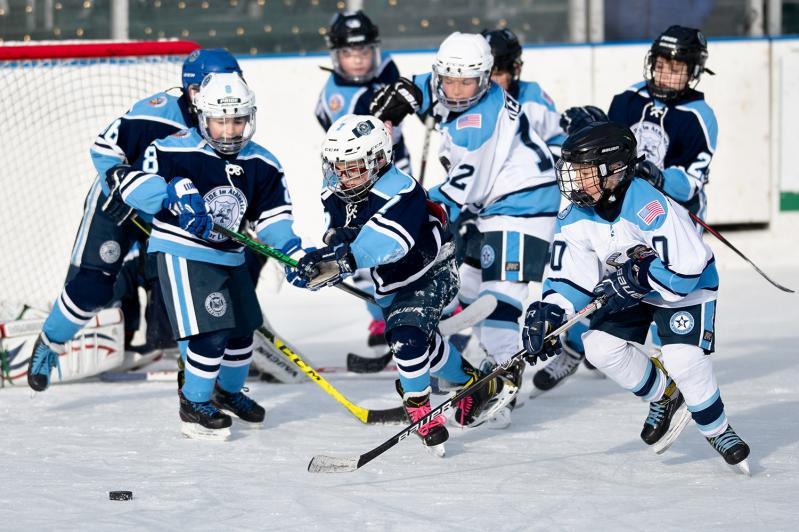 Sunday, a day in which Peconic Hockey Foundation Wildcat youth teams made their debuts at the Buckskill Winter Club here, was a good one, with the 12-u and 8-u teams winning. All four of the Wildcat teams are on the cusp of the playoffs, Brendan Goldstein, who coaches the 12-u and 8-u teams, said this week.
Craig Macnaughton
By Jack Graves

The 12-and-unders, “our powerhouse team,” according to their coach, Brendan Goldstein, defeated the Long Island Sharks 17-0, the 8-u’s, also coached by Goldstein, won 11-4, and the 10-u’s, coached by Jason Craig, lost to the Arrows of Freeport, 8-0.

“Give us another year and we’ll be up with them,” Craig, a native of western Canada who played at Colgate, said by phone afterward before driving his daughters to a game in Roosevelt.

“All four of our teams — we’ve got a 16-u team too — are on the cusp of the playoffs,” said Goldstein, “which is an incredible achievement considering it’s the first year of league competition for all of these kids.” He began training youngsters in the sport at the Southampton Ice Rink eight years ago. “What you’re seeing is the result of the clinics

we began giving at the Southampton Ice Rink to kids who ranged in age from 5 to 16. Years and years of dedication and hard work has led to this.”

Interestingly, Goldstein, who grew up in Hauppauge and played for the Junior Royals and in college, said that the Covid pandemic, while “a terrible, terrible tragedy,” had played a part in the sport’s growth here.

“Last winter, during Covid, we gave tons of clinics at the Southampton Ice Rink,” said Craig. “We weren’t allowed, because of Covid, to play games, but we could practice, and hockey’s something you’ve got to practice, practice a lot, if you want to be good.”

As for numbers, “We’ve got about 15 on each of the four teams, and about 100 kids are playing in a recreational league at the rink in Southampton. . . . ”

“It’s such a great program,” said Chris Minardi, whose 9-year-old son, Cam, plays on the Wildcats’ 10-u team. “The Peconic Hockey foundation has addressed a need that has gone unmet for basically forever. The foundation, the Buckskill Winter Club, which has had clinics too,  and the Southampton Ice Rink have been a godsend during the pandemic. It’s only been in the past year that everything’s gelled.”

“My son plays every week throughout the year,” Minardi continued. “At Hauppauge, at Dix Hills . . . in tournaments in Boston, Rhode Island, Philadelphia. They’re going to Hershey Park next month. It’s the Peconic Hockey Foundation that has provided the structure, the teams, the coaches. Brian Wish has been fantastic. The Wildcats are on the ice 200 days a year.”

Others on the 10-u team are Hunter Harrington and Stefano McCourt of East Hampton, Grady Craig, Sonny Perello, and Anthony Cappiello of Sag Harbor, and Lydea Orent, Fritz Keber, Brody Maniaci, Trevor Gallaway, Luka Pisano, and Landry Trantolo, all of Southampton. Hamish Heathcote, Ryan Yaniro, and Kevin Yaniro, all of New York City, and Mikey Kessler, of Westhampton Beach.

Goldstein said a fifth team, a 14-u team, would be added next year. “Something very special is going on,” he added, “something that has drawn the interest of the kids, their parents, and the community. While there didn’t used to be much going on at this time of year, now there is. I think the real story here is if you build it, they will come.”