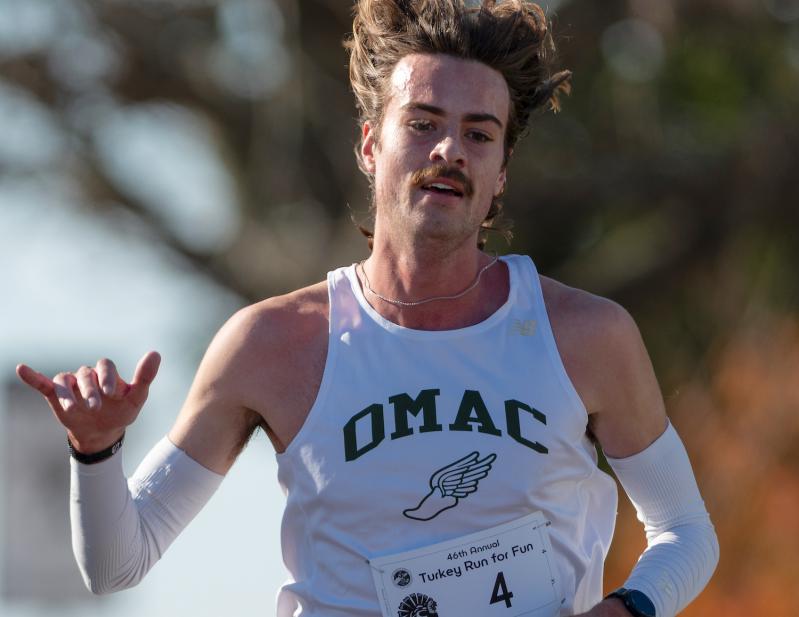 Ryan Fowkes not only set a record in last Thursday’s Montauk Turkey Trot 6-miler, but he has also this fall set George Washington University records in the 8K (4.97-mile) cross-country distance and in the 10,000-meter race.
Craig Macnaughton
By Jack Graves

Runners, especially those who had been confronted with strong winds and a deluge 11 days before at the Dock Race, couldn’t have asked for better conditions in which to run the East Hampton Town Recreation Department’s 3 and 6-mile Turkey Trots on Thanksgiving Day in Montauk.

And this year, in contrast to 2021, when because of a wave of last-minute registrants things became so discombobulated that results never resulted and the identity of the 3-miler’s female winner, Samantha Whitmore, was not known until a week afterward, everything went smoothly.

“There was a fantastic turnout” of 970 registrants, “and despite that we started on time,” said the town’s recreation director, John Rooney, who had Elitefeats of Islandia time the races this year. The net proceeds, he added, were to be apportioned among the town’s food pantries. Asked about the frozen turkeys that used to be handed out to winners in the past, Rooney said, “We stopped that years ago -- the logistics were just too complicated.”

Ryan Fowkes, 21, a George Washington University junior, won the 6-miler in a record-setting 29:25.04, eclipsing his winning time of last year by two and a half minutes. Recently, he  placed sixth in the Atlantic 10 Conference 8K cross-country championships in a school-record 24:11.6. He also ran a school-record 30:49.9 in finishing 28th in the N.C.A.A. Mid-Atlantic Regional 10K race this fall.

There were some swimmers in the field that day too, including Ava Castillo, who recently returned from the state girls swimming championships near Rochester, her coach, Craig Brierley, and Tom Cohill (pushing two of his children in a stroller), who coaches the Y.M.C.A. East Hampton RECenter’s youth swim team, the Hurricanes. Next up for the Hurricanes, Cohill said, will be the Cross Island and Flushing Y Holiday Invitational at the Nassau County Aquatic Center in East Meadow from Friday, Dec. 9, to Dec. 11.

Brierley and East Hampton fans can now boast of a state champion, apparently the first ever here in either girls or boys swimming, in Jane Brierley (no relation), who won the state’s breaststroke final in 1 minute and 3.75 seconds after having been the runner-up in a preliminary heat.

“We’re very proud of her — she's very motivated,” Coach Brierley said of Jane Brierley, who’s been with him on the varsity for four years and is a Hurricane and a town lifeguard to boot. The breaststroke, he said, is “the most difficult. It’s the slowest of the four strokes, and so you’re swimming longer. It takes a lot of upper-body strength. In addition to all of her work in the pool, she does a lot of strength training on her own.”