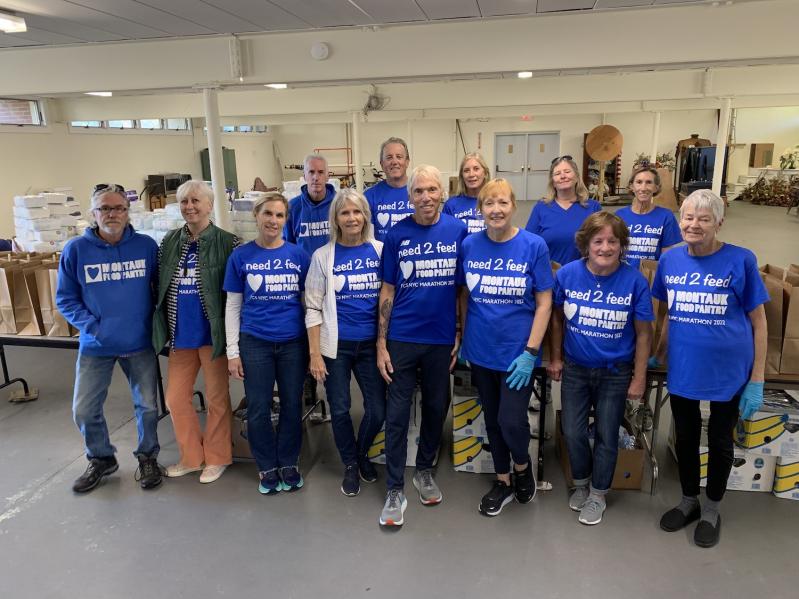 Peter Ciaccia, center, is running the TCS New York City Marathon to raise money for the Montauk Food Pantry, where he posed with other food pantry volunteers on Thursday.
Durell Godfrey
By Jack Graves

Peter Ciaccia, who for almost two decades until his retirement in 2018 organized and directed New York Road Runner events, including the TCS New York City Marathon that is to be run throughout the city’s five boroughs Sunday, will have two goals in mind on the Verrazano Bridge -- crossing the 26.2-mile race’s finish line, and raising as much money as he can through his Need 2 Feed gofundme effort so that the Montauk Food Pantry can continue to feed more than 200 needy families and homebound people in that hamlet.

Ciaccia and his wife, Gillian – also a Montauk Food Pantry volunteer – have lived in Montauk year round since 2018.

“Food insecurity should not exist in this country,” the slim 69-year-old long-distance runner said as he and a dozen other volunteers were filling tablesful of bags with food at the St. Therese de Lisieux’s Parish Center’s basement Thursday under Alice Houseknecht’s direction.

The fact that food insecurity does exist here inspired the New York City marathon’s former race director to put together a virtual 5K during the pandemic that raised $12,000 for the food pantry in 2020, and to recently set a food pantry fund-raising goal of $20,000 – what it takes to stay afloat each month – that as of Thursday had been exceeded by $8,376.

Though he hasn’t run New York in 21 years, having been too busy as the New York Road Runners Club’s president of events – “a totally full-time-plus job” – Ciaccia doesn’t doubt that he’ll finish, “though it’s going to be a ridiculously hot day.”

When told by this writer that his son lived on Lafayette Avenue in Brooklyn, at the eight-mile mark, he brightened. “It’s like the Tour de France there, like the mountain stages, with everyone so close and cheering you on . . . it feels like that.”

Some seven or eight miles farther along, “it’s steep and very, very quiet as you come onto the 59th Street bridge, and then, coming down onto First Avenue, there’s a roar that builds – it’s like entering an Olympic stadium! You get excited and run fast, not giving any thought as to how you’ll feel at mile 20.”

His goal when it came to the marathon is “to cross the finish line upright,” he said with a smile.

Meanwhile his fund-raising effort has yet to hit the wall. Prospective donors can summon it up by going to gofundme.com searching for Need 2 Feed.