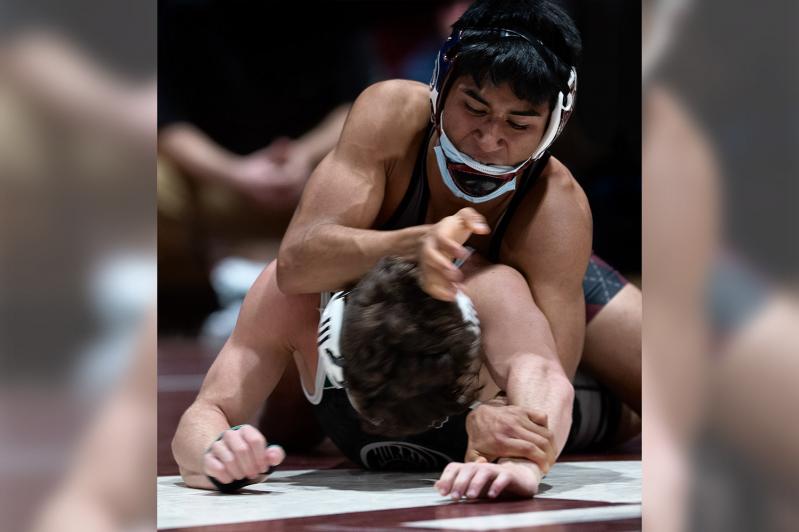 East Hampton High School’s boys and girls basketball teams were paused because of the Covid pandemic this past week — the girls until Tuesday, Jan. 18, and the boys until Friday, Jan. 21.

Meanwhile, the boys swimming and wrestling teams — and the Pierson and Bridgehampton boys basketball teams — remained active. The swim team swam to an 80-80 tie here at the Y.M.C.A. with Sayville-Bayport last Thursday, a meet that went down to the final event, the 400-yard freestyle relay. A first-place or a two-three finish would have assured Craig Brierley’s team of the win, but the visitors’ first and third-place finishes earned them the tie.

The wrestling team, without its coach, Ethan Mitchell, who was sidelined by Covid, won one match and lost two at the Cory Hubbard duals at Westhampton Beach Saturday. Caleb Peralta, who wrestles at 126 and 132 pounds for East Hampton, went 3-0 on the day, winning by pin over his Sayville and Patchogue-Medford opponents, and winning by forfeit in the meet with Hampton Bays, which East Hampton’s team, coached that day by Jim Stewart, won 54-6.

It was the third win of the season for Mitchell’s charges vis-a-vis eight losses. The team was to have wrestled at Kings Park yesterday and is to play host to East Islip, beginning with the varsity matches at 4:30, tomorrow. A long gap is to ensue between the end of the league season and the league tournament. Mitchell has filled it with a nonleague match at William Floyd on Jan. 19, a tri-meet with Centereach and Southampton at the latter school on Jan. 20 or 21, a possible makeup of a meet at Half Hollow Hills East on Jan. 22 that was postponed earlier in the season, and an appearance at Bayport-Blue Point’s Phantom dual tournament on Jan. 29.

“Considering how young our team is, it’s good to load up on the season’s back end,” Mitchell said by phone on Sunday. “The kids are enthusiastic and are learning — there’s a lot of good energy. We tell them it’s not about the wins and losses, but about the journey, the process.” He has 35 on the roster. “We’ve been having 15 to 20 show up for practice,” Mitchell said.