After a nagging injury, Evan Masi is on track again 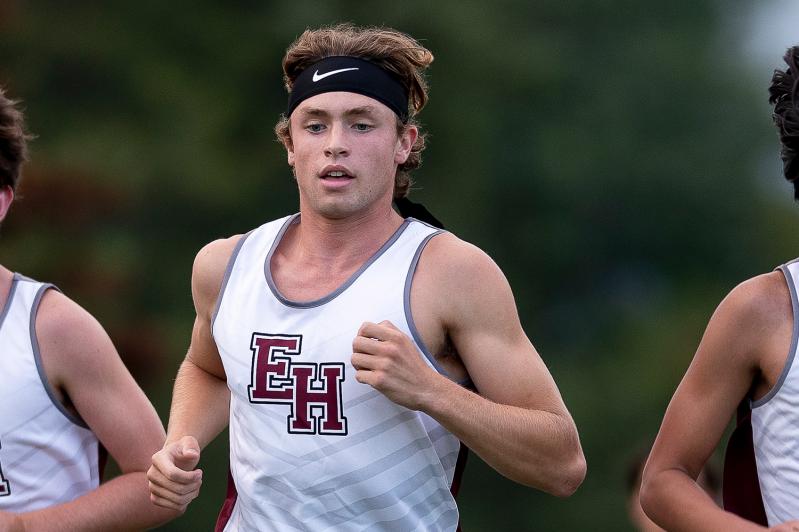 Evan Masi made believers of those who doubted he could come back from a severe ankle injury suffered in the fall of 2019.
Craig Macnaughton
By Jack Graves

Evan Masi, an East Hampton High School senior who recently became a News 12 Long Island scholar-athlete of the month, an award that carried with it a $1,000 scholarship and resulted in a televised interview, has, like his peers, been through trying times in his high school career. The major trials being in his case a reluctant-to-heal broken ankle that sidelined him from cross-country and track competition for the better part of two years and the coronavirus, which had him quarantined this week.

The ankle injury occurred in the fall of his sophomore year, soon after he’d competed in the state boys cross-country meet in Plattsburgh, and ultimately that nagging physical setback, together with the pandemic-caused shutdown of high school sports in the spring of 2020, conspired to keep him out of action until this fall.

“If there were such an award, Evan should be the comeback runner of the year,” East Hampton’s boys cross-country coach, Kevin Barry, said at the end of his team’s second-straight undefeated league championship season in 2021. “A lot of people and coaches didn’t think he could come back after an injury like that.”

Others may have had their doubts, but Masi didn’t, the 17-year-old class president said by phone the other day, though he did agree that the pandemic, with its consequent constraints and uncertainties, had been an ordeal for him and for his schoolmates. “It’s definitely been tough,” he said.

The uncertain times they’d lived through undoubtedly would give him plenty of food for thought when it came time to write his commencement speech, he was told.

Masi, who’s also in the running to be the class of 2022’s valedictorian, was accepted as a five-year architectural major by Cornell University in mid-December, one of just 25 to be chosen. Toward that end he has interned the past three summers with his architect father, Paul. He has also worked with a program on ocean conservation that LTV has aired and has been a biology lab assistant at the high school.

Back to cross-country, Masi agreed with his coach that he had made believers of those who had doubted him with his win in the Tom Knipfing Invitational boys 5K in Ridge on Oct. 1, a race in which he edged his senior co-captain — and the senior class’s vice president and homecoming king — Amari Gordon by a half-second. “I was in front for the first two miles, but Amari caught up. He’s a great runner and friend — we do a lot together.”

Moreover, Masi finished in the top third in the state meet, made second team all-county, and made, as was also the case with Gordon, the all-academic all-county team.

He also surfs, with Chase Lieder, Tucker and Chloe Coleman, and others at Ditch Plain in Montauk, and with his father, who has taken him a couple of times to Fiji, where 16-foot waves can be found. Definitely those waves were scary, said Masi, who also gives surfing lessons, though they got the adrenaline going.

His father and mother, Liz, had always encouraged him to pursue sports, like running and surfing, related to nature, he said.

Ryan Fowkes, now a star long-distance runner at George Washington University, was a senior when Masi, who was a county cross-country champion as a middle schooler, Gordon, and Colin Schaefer won the county freshmen cross-country meet.

He said he’d been running ever since his parents had taken him — at first in a carriage — to the Montauk Thanksgiving Day Turkey Trots. He won’t run competitively at Cornell, the demands of his major being so great, but he would keep running.