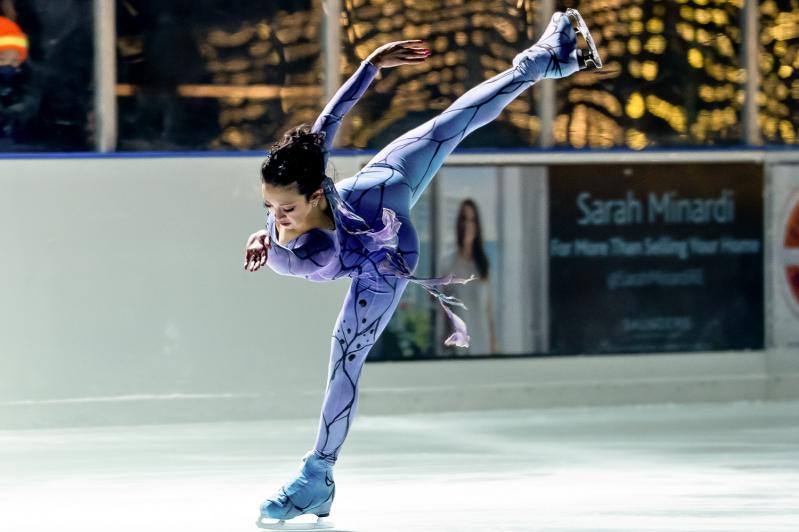 Valerie Levine of the Ice Theatre of New York was among a half-dozen professionals who performed in an ice show at the Buckskill Winter Club here Saturday evening.
Craig Macnaughton
By Jack Graves

Judging from the scores of skaters there Saturday afternoon, the Buckskill Winter Club is the place to be this season, and, despite the fact that the weather swings since Thanksgiving have caused several rebuilds of the rink’s ice, “people are telling me that the ice this year is the best ever,” Doug De Groot said during a conversation in the clubhouse.

Last winter, because of the Covid pandemic, “we just skated around,” said De Groot, who co-owns Buckskill with his wife, Kathryn. But there’s a lot going on at the tennis and skating club now when it comes to figure skating, hockey, and even curling. There was a professional ice show there Saturday evening with half a dozen performers from the Chelsea Piers-based Ice Theatre of New York, two of whose members, Sarah France and Christopher Aaron Singletary, give lessons at the club.

An ice dance coach and choreographer since 1998, France — she’s also an aerialist, modern dancer, and inline artistic figure skater — is in her second year as Buckskill’s figure skating director. “Sarah looks at skaters as both athletes and artists, and seeks to draw out their performance skills with a keen eye toward technical accuracy and precise movement on and off the ice,” her bio, posted next to the clubhouse’s fireplace, says.

Singletary, 26, a fellow Ice Theatre performer whom France recruited this winter, and who has skated competitively since the age of 7, is available for lessons throughout the week. The club’s other figure skating instructors are Milly Wasserman, one of the Ice Theatre of New York’s apprentice soloists, Brittni Svanberg, an East Hamptoner who skated with Boston University’s figure skating club until her graduation in 2018, and Emma Dahl, who trained at the University of Delaware for six years and has been a figure skating instructor at Buckskill for the past five. De Groot said that Sama Azadi, “a landscape architect whose true love is skating,” has also been added to the figure skating staff.

Tim Luzadre, who has been with the Winter Club since the beginning 18 years ago, heads its ice hockey program, which this winter, under the sponsorship of the Peconic Hockey Foundation, has 16-u, 12-u, and 10-u teams. The younger kids practice Sunday mornings, the older ones, a number of whom live up the

Island, practice Thursday evenings. Evening drop-in hockey for adults has been a big draw too, said De Groot, who added that curling, the bocce-on-ice game, with curlers, stones, and sweepers that originated in Scotland in the 16th century and is now a winter Olympic sport, is to be introduced at the rink soon by members of the Long Island Curling Club in Syosset.

“We’ve got one [15-by-150-foot] ‘sheet’ down already,” De Groot said. “And we’ve got the equipment. We’re just waiting on the curling club to come out and show us how to play.” Given the rink’s National Hockey League dimensions, 85 by 200 feet, as many as five sheets could be accommodated.