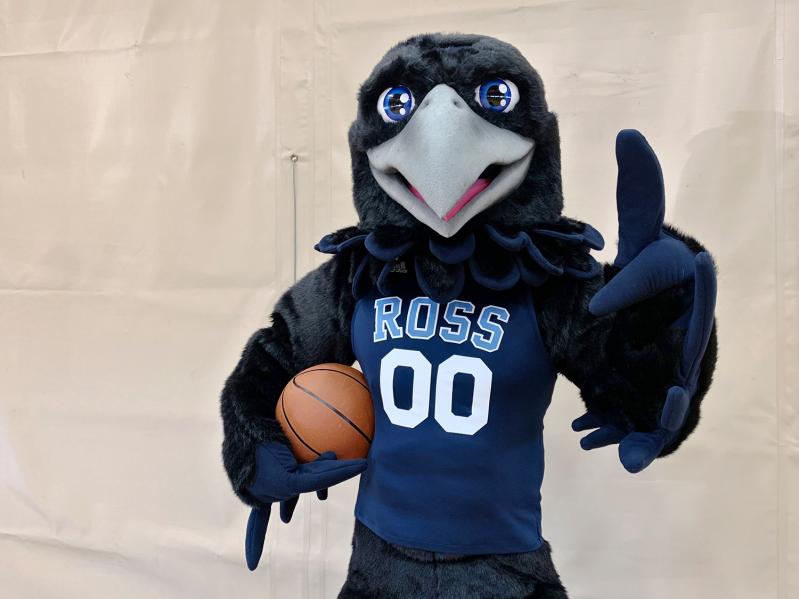 When the Ross School Raven made its debut earlier this month it got an enthusiastic round of applause.
Durell Godfrey
By Christine Sampson

When the Ross School’s student-athletes convened for the fall athletic awards ceremony on Nov. 9, they were in for a surprise: the debut of the school’s official mascot, the Ross Raven, in a sleek, brand-new costume, who bounded into the gymnasium with high energy and high-fives all around.

“The kids loved it! It got a nice ovation,” said Howard Brown, the school’s athletic director, a few days later. “It’s definitely something that the students can relate to and get behind. It’s one more way to draw the kids together as a community.”

The Raven was the school’s original mascot, and after several years when the teams were called the Cosmos — in honor of the late Steve Ross, who was an owner of a professional soccer team called the New York Cosmos — students voted in 2017 to call themselves the Ravens once again.

A few years back, Steve and Lisa Frohlich, who are parents of two Ross School student-athletes, rallied about 20 other parents to form an athletic committee tasked with boosting participation in school sports. An effort to design an actual raven costume stalled during the Covid-19 pandemic, until some parent volunteers stepped in to help.

On Nov. 9, Steve Frohlich was the man inside the six-foot-tall, $6,000 costume. He donned it again last Thursday at the Ross School campus in Bridgehampton, where the school’s elementary students were equally as excited as their upper school peers.

“Over the past three years, Covid has presented certain challenges,” Steve Frohlich said in an email to The Star, “and while some of our teams were sidelined, our committee shined its spotlight on other initiatives, such as raising $6,000 for Covid-related testing and personal protective equipment for our faculty, and even raised $1,500 for a sports equipment grant for the middle school.”

Austin Handler, another Ross parent, was instrumental in making the mascot come to life, inspired by mascots he’s seen at colleges and professional sporting events. “Ross has had some great sports teams,” he said, “but I don’t think most people think of Ross as being a strong athletic school, so this was an idea that we had to really try and elevate that to build school spirit from the inside out.”

A regional example can be found in Stony Brook University’s mascot, Wolfie the Seawolf, known for his sweet dance moves. Wolfie attained celebrity status earlier this year by making the Final Four round in a statewide mascot competition.

The Ross School held mascot tryouts for students last week, announcing on Friday that the name of the student who will represent the school as the Raven will remain a secret.

With an outfit manufactured in Canada, the Ross Raven was supposed to make its debut during the school’s homecoming weekend earlier in October, but its flight was delayed — literally — when the package got held up at the border.

“After three years of thinking and imagining it, it was so awesome to see the raven come to life,” Handler said. “And after the last few years, it’s nice to have something fun to get excited about. It couldn’t have come at a better time, even if it was stuck in customs for a few days.”