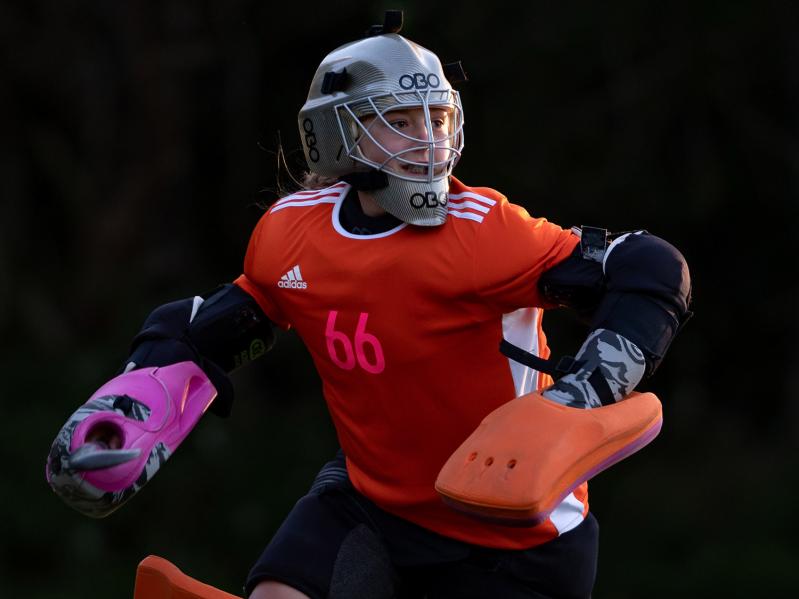 Caeleigh Schuster, the ninth grader who tended goal for the East Hampton High School field hockey team this fall, has been named goalie of the year in the county’s Division II.
Craig Macnaughton
By Jack Graves

Eric Armijos, who with Figueroa played in the senior all-star game on Nov. 16, was the coaches’ pick as League IV’s most valuable player. He was also named to the academic all-county team and the all-conference team. Figueroa, Gutama, and Tacuri also were all-conference, and Hilario and Jonathan Armijos were all-league choices.

Don McGovern’s players this fall won the school’s first boys soccer league championship in eight years, though the team, which McGovern has described as one of his best ever, was treated rudely by Half Hollow Hills West in a Class A semifinal here on Halloween, a game that the Bonackers lost 1-0. Hills West lost, in turn, to the county’s top “A” seed, Amityville, in the final, after which Amityville went on to win the state championship.

Moreover, Schuster, Casey Stumpf, and Ally Schaefer were named to the all-tournament team, and Schuster, who’s only a ninth grader, was the division’s goalie-of-the-year.

Field hockey was one of eight East Hampton High fall teams to compete in the postseason. After beating East Islip and Harborfields, the Bonackers lost 4-3 in overtime to Rocky Point in the Class B championship game at Newfield High School.

Boys soccer and girls cross-country were league champions. Boys cross-country and girls swimming were runners-up, and field hockey and golf were third-place finishers. The girls tennis team, with a 9-3 record, finished fourth in its league, behind Westhampton Beach, the Ross School, and William Floyd, all at 11-1.

McKee announced the above award-winners at a recent dinner at the Amagansett Firehouse, and also singled out Byrnes as the team’s most valuable player, Danny Rossano as its most-improved player, and Ike Fagin, “a great kid who played multiple positions,” as the coach’s award recipient.

Two members of East Hampton’s golf team, Trevor Stachecki and Nico Horan-Puglia, have qualified for the state tournament in the spring, according to their coach, Rich King.

By virtue of their top-10 finishes in the county individual tournament, Stachecki and Horan-Puglia also made the all-county team. In addition, Juan Palacios, J.P. Amaden, and Lucas Centalonza have been named to the all-league team.

Diego Rojas was all-division in boys cross-country, said the team’s coach, Kevin Barry, who added that Rojas, Liam Fowkes, Liam Knight, and Brayan Rivera were all-league runners. As far as team awards go, Barry said Fowkes was his m.v.p., that Rojas was  “most-improved,” and that Rivera was his pick to receive the coach’s award.

Jocelyn Prieto has been named to the all-league team in girls soccer, Cara Nelson, East Hampton’s coach, said. She added that Nicole Velez and Skye Tanzmann, both all-county academic team members, were “among the county’s top 12 highest-achieving students who play girls soccer.”