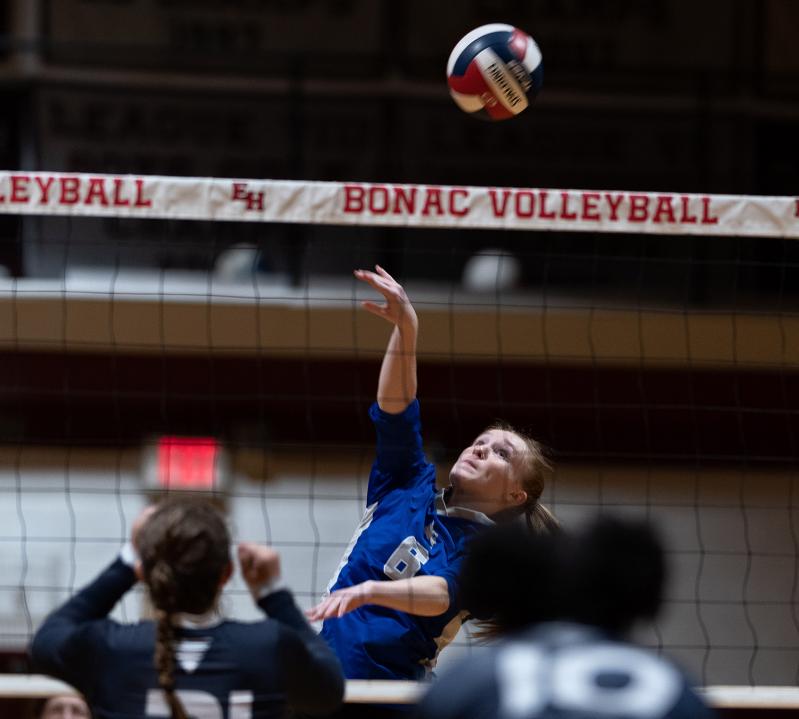 Alex Burns, one of the Shelter Island High School girls volleyball team’s captains, went for a kill during the county (and Long Island) Class D championship match with the Ross School at East Hampton High School on Nov. 7.
Craig Macnaughton
By Jack Graves

The Shelter Island and Ross School girls volleyball teams, whose coaches, Cindy Belt of Shelter Island and Ana Jacobs of Ross, have conducted clinics with each other in the past, contended for the county (and Long Island) Class D championship at East Hampton High School on Nov. 7, with the Islanders, as they did last year, coming out on top — though the match went down to the fifth and final set.

This season was a rebuilding one for both teams — Ross had lost an outstanding athlete, Leah Masterson, to graduation, and returned three senior starters. Belt had only two returning varsity players, Alex Burns, an outside hitter, and Mary Gennari, an outside hitter and backup setter, though Sophie Clark and Mackenzie Speece grabbed Newsday’s headline the next day, largely for their serving, “and deservedly so,” Belt said by phone over the weekend.

Speece’s serves buoyed the Islanders in the first set. “She’s been working really hard on her jump serve, and I think she had 9 or 10 points in a row in that first set,” Belt said. “She got us off to a strong start.”

Clark came up big in the decisive set, serving six straight points to put the Islanders up 12-4, according to Newsday’s account.

“Yes, it was a great feeling” to win the championship and deny Ross a third-straight win in doing so, said Belt, “though both of our matches had been close, especially the second time. The girls rose to the occasion; they’ve come so far this season. I’m very proud of them.”

Two days later, Shelter Island played the state’s defending Class D champion, Mount Academy of Esopus, in a regional semifinal at Bard College in Annandale-on-Hudson, and, not unsurprisingly, lost 3-0. “It’s a five-hour drive to get to Bard,” said Belt, adding, with a laugh, “it was a long trip for a short game.”

It was hard, Jacobs said, to beat a team three times in a row, and it hadn’t helped, she added, that her tall middle blocker, Gaia Frenati, had come down with an injury leading up to the championship game, which necessitated adjustments.

In the decisive fifth set, “we made some mistakes early and they pulled away,” though her players had given it everything they had, said Jacobs, Chloe Hincapie, the senior outside hitter, Julia DeCarlo-Cooper, the sophomore libero, Alexandra Behmoriam (who had been moved from the right side to replace Frenati in the middle), Tracy Bao, the senior setter, and Ella Moeller, a sophomore outside hitter, in particular. “It’s hard to pick an M.V.P. because they all brought a lot to the table.”

She had told her charges afterward that they should be proud for having come back the way they did, extending the match to its limit.