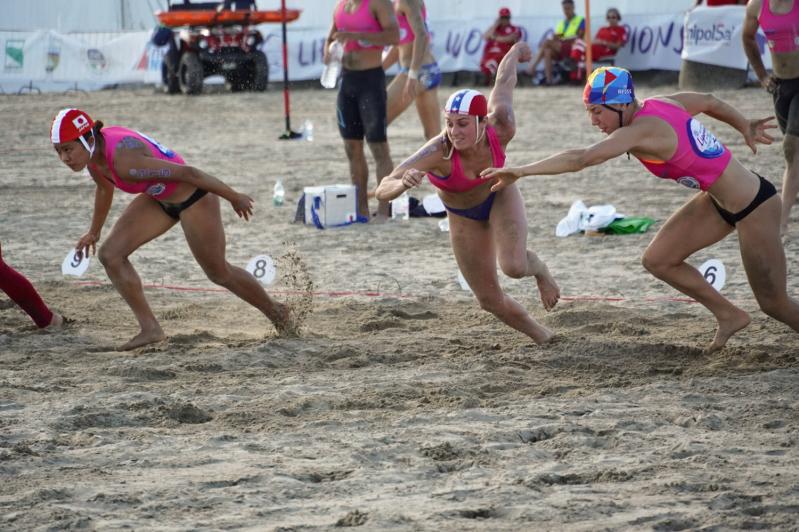 Amanda Calabrese, who joined East Hampton’s junior lifeguard program at the age of 7, and who is 25 and a resident of San Francisco now, continues to excel in lifeguarding competitions.

Most recently, at the world lifesaving championships in Riccione, Italy, on the Adriatic, she came away with three top-10 finishes — fourth, with three teammates, in the Taplin relay, ninth, with a teammate, in the line-throw rescue, and sixth in beach flags, an individual event that she has won numerous times at the national level, beginning in 2009 as an 11-year-old.

Calabrese said by phone the other day that Emily Ward — a former national beach flags champion herself — and Eric Bramoff had taught her what she needed to know when it came to the hotly contested “musical chairs” beach flags event, in which the last two remaining contestants, starting from prone positions, rise up and race 25 meters in the sand to dive for the last protruding tube.

Having recently launched, with a former Stanford University classmate, a company that sells women’s health products and has attracted venture capital, Calabrese doesn’t want to stop competing in lifeguarding events, inasmuch as they offer “a good balance to my work life. . . . I love it.”

She always has. When first interviewed by The Star in the summer of 2014, after she’d passed the ocean certification test at 16 and was about to enter her senior year at East Hampton High School, Calabrese said that everything she did athletically — swimming, paddleboarding, surf skiing, longboard surfing, running, hurdling, pole-vaulting, and field hockey — she did in order to make herself a better lifeguard, her prime motivation being to help people, but also to have fun.

Her first international lifesaving competition, in Montpelier, France, was that year, as a member of the United States youth lifeguard team. Since then she’s represented the U.S. in seven other world championships, in such countries as Australia, Japan, New Zealand, The Netherlands, and South Africa, in addition to Italy this year.

Also in that summer of 2014, she and her brother, T.J., gave surfing lessons at Ditch Plain to special needs children from all over Long Island, marveling at the joyous connection the kids made with the water. She has also overseen surfing camps for girls here, beginning in 2018 with an 8-to-15-year-old cohort that included a number of present-day East Hampton High School athletes, Chloe Coleman, Melina Sarlo, Lyla Wilson, Ryleigh O’Donnell, Lola Garneau, and Carolina Condon.

“It’s great to see how successful they’ve become — they make me proud,” said Calabrese, who continues to surf in the “big and cold and stormy” surf at San Francisco’s Ocean Beach. It wasn’t as pleasant as Ditch Plain, she said, but it’s a challenge, which is why she likes it.