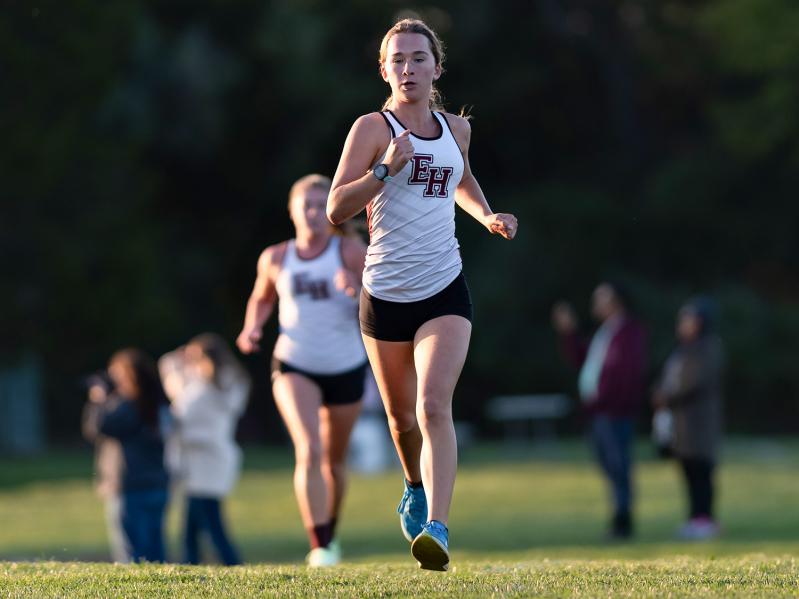 Dylan Cashin will run in the state cross-country meet this Saturday near Utica.
Craig Macnaughton
By Jack Graves

Dylan Cashin, an East Hampton High School junior who led the girls cross-country team to a league championship this season, qualified to compete in the coming state meet by finishing fifth in the county Class B 5K at Sunken Meadow State Park Friday.

According to her coach, Diane O’Donnell, she was in the hunt for two-thirds of the race, there being “about 10 girls hoping for a qualifying spot,” but the pack began to spread out “coming down Cardiac Hill,” with about a mile to go.

Sayville, which was the winning team, and the next five individual qualifiers, Cashin being one, are to vie in the state meet at Vernon Verona Sherrill High School near Utica this Saturday. “In 2019, our whole team went,” said O’Donnell. “There wasn’t a season in 2020, and last year Sayville won and we didn’t have anyone qualify.”

While East Hampton was fifth among five teams running in Friday’s Class B race, it had done well to get there, said O’Donnell, who added that the qualifying “B” teams all had sub-23-minute 5K averages.

Teammates of Cashin’s who followed her over the finish line were Ryleigh O’Donnell, Zion Osei, Emma Tepan, Briana Chavez, and Riley Miles. Leah Fromm did not run because of shin splints. O’Donnell will have all of them back next fall. Cashin, O’Donnell, Tepan, Miles, and Fromm are juniors. Osei and Chavez are sophomores.

In other postseason news, East Hampton’s girls swimming team placed seventh in the county meet Sunday, and Jane Brierley, a senior, who had some time ago qualified for the state meet in the 100-yard breaststroke, bettered her previous best time in winning the county championship in that event. A fellow senior, Cami Hatch, qualified Sunday for the state meet in the 100 backstroke.

Craig Brierley, East Hampton’s coach, is to take Brierley, Hatch, Ava Castillo, Lily Griffin, and Lizzie Daniels (as an alternate) to the state meet in Rochester later in the month.

Turning to golf, Trevor Stachecki, a senior, and Nico Horan-Puglia, a junior, were top-10 finishers in the county’s individual golf tournament, and thus are to compete in the state tourney in Elmira in June. East Hampton lost by five shots to Commack in the county’s team tournament on Nov. 2, Rich King, the team’s coach, said in an email.

East Hampton’s boys cross-country team, which was the runner-up to Westhampton Beach in league competition, losing out by 2 points to the Hurricanes in the last dual meet of the season here, did not qualify any runners for the state meet, but, nevertheless, ran well, its coach, Kevin Barry, said Sunday.

Barry added that Westhampton’s Max Haynia, who has run 16 minutes and 22 seconds at Sunken Meadow, ran more than a minute slower Friday, not having to worry about the competition. He is one of the favorites to win the state meet, Barry said.