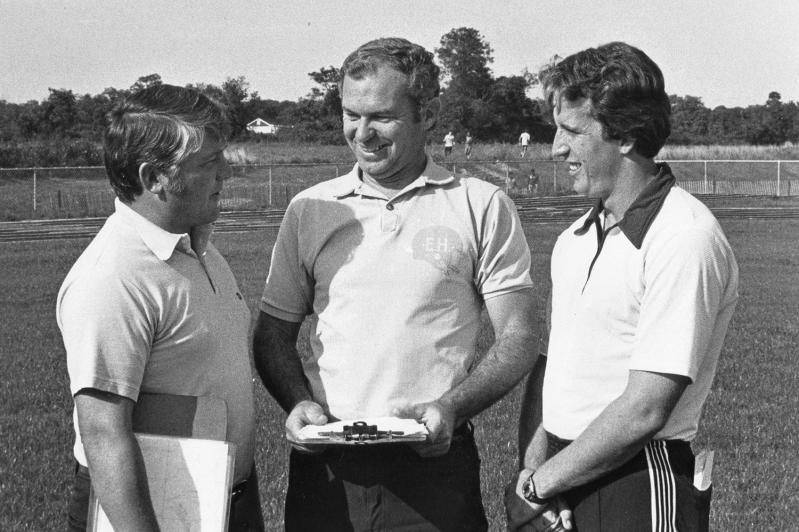 Dick Cooney, shown above in 1979 with Bob Budd, at left, and Mark McKee, at right, began his career here as a physical education instructor and as the varsity football coach, boys track coach, and junior varsity wrestling coach.
Cal Norris
By Jack Graves

Richard J. Cooney Sr., the East Hampton School District’s athletic director from 1974 until his retirement in 1995, is to be a New York State Athletic Administrators Association “wall of honor” inductee at Saratoga on March 16. During his tenure, female sports began to flourish here under Title IX and he coached a football team quarterbacked by his son, Rich Jr., to a county championship in 1981.

The former A.D., after whom the high school’s fields are named, wore many hats when at East Hampton, overseeing not only athletics and physical education, but also the district’s health and driver’s education programs, as well as its grounds crew and nurses. Unbeknownst to him, he was nominated for the statewide honor by Joe Vas, East Hampton’s outgoing athletic director and by Westhampton Beach’s A.D., Kathy Masterson.

“Everything he did he did for the kids — as a teacher it was his desire to teach wellness and fitness to last a lifetime,” Mike Burns, Vas’s immediate predecessor, said in announcing at the 1995 athletic awards dinner that the high school’s athletic complex, which Cooney created, would be named for him. Burns then added, “As a coach, I was struck by his intensity and work habits, and, as an administrator, by his ability to make decisions, to develop programs.”

Cooney, who was 55 at the time, went out on a high note: There were two county championship teams that year, field hockey and baseball, each for the second year in a row, and five league champions — baseball, boys track, girls volleyball, bowling, and gymnastics. He came to East Hampton from Brentwood, where he was athletic director from 1962 to ‘69. During his tenure here Cooney oversaw a rebuild at East Hampton’s Herrick Park, where middle school teams practice and play, was president of Section XI, the governing body for public high school sports in Suffolk County from 1993 to ‘95, served on its executive board from 1988 to ‘96, was president of Suffolk’s Athletic Directors Association from ‘89 to ‘90, served on Section XI’s football and wrestling committees, and received state athletic administration awards in 1991 and ‘98. He was inducted into East Hampton High School’s Hall of Fame in 2013.

On his arrival from Brentwood he taught physical education and coached the varsity football and boys track teams, as well as the junior varsity wrestling team. He replaced Fran Kiernan, who had been East Hampton’s A.D. since 1945, when Kiernan, who lived to be 107, retired in June of 1974.

In 2016, Cooney and his wife, Kathleen, returned to Long Island from Kauai, where they’d lived for a decade — “it was paradise” — settling in Aquebogue primarily to be closer to their seven children and 10 grandchildren who live in Rye, New Hampshire, Naples, Fla., Melbourne Beach, Fla., Key West, Fla., Patchogue, and Montauk.

“That’s one thing we don’t have over here — the traffic,” the retired A.D. said during a telephone conversation Sunday. “It took us from 10 to 12:30 to drive from Aquebogue to Montauk, where my daughter Diane [Carillo] lives, this summer. If you drive to Hampton Bays and take the train, it takes 43 minutes.”