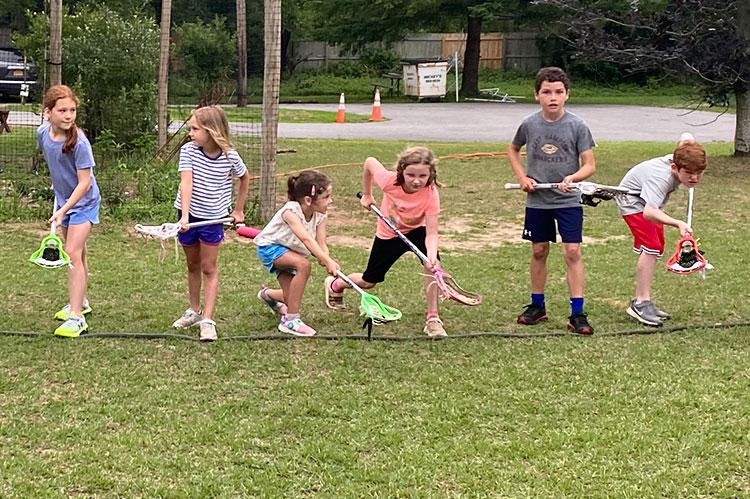 Girls and boys are welcome at the East End Lacrosse Club's once-a-week youth clinics behind the Neighborhood House on Three Mile Harbor Road, where Project Most is based.
Ricky Smith
By Jack Graves

There is a drive afoot to revive the youth lacrosse program here, an effort led by Ricky Smith, a former professional and University of Virginia defenseman who lives in Springs, that may result in the return of a full varsity schedule to East Hampton High School in coming years.

As has been the case with other sports here whose varsities do well year in, year out -- boys and girls swimming, into which the Y.M.C.A. East Hampton RECenter Hurricanes feed, perhaps being the prime example -- Smith, who has two sons, Colton, 7, and Dallas, 5, who play, wants to start them young, boys and girls.

Thus, he and Chris Corwin have been overseeing once-a-week clinics in the fundamentals for kindergartners-through-sixth graders at the Neighborhood House, Project Most's home, on Three Mile Harbor Road in East Hampton.

Corwin's sons, Charlie and James, play on the South Fork Islanders, a combined Southampton-based high school team formed several years ago when participation began to dip here and in Southampton,

"What we'd like to see," said Joe Vas, the East Hampton School District's athletic director, with whom Smith met recently, "is something similar to what Joey McKee," East Hampton's varsity football coach, "has been doing at Herrick Park with flag football."

Nicole Castillo, who has been helping Smith get things off the ground, said Friday that boys lacrosse probably would remain combined, "though if there are more on the team from East Hampton, they may come to us. This past year's varsity was Southampton-heavy, mostly seniors, with seven or so from East Hampton, though our numbers are growing. The East Hampton Middle School had decent numbers, so there will be some eighth graders coming up."

A number of East Hamptoners, including her 14-year-old son, Luke, "have been playing on a travel team, Legacy Lacrosse, based in East Islip -- Charlie Corwin, Luke, and Jack Cooper, they're all sophomores, and J.P. Amaden, who's a junior. James Corwin, an eighth grader, and Zane Karoussos, who's a seventh grader, are also on that team."

The team usually practices in Patchogue.

Smith and his wife, Meredith, who also played lacrosse at U.Va. -- they met, he said, when they were rehabbing torn A.C.L.s -- switched from part-time to full-time residents when work schedules became more flexible because of the coronavirus pandemic.

Some high schoolers, including Colin and Ally Schaefer, James and Katherine Corwin, and Lila Gabbard, had volunteered at the summer clinics, Castillo said.

Assuming there is sufficient interest, among East Hampton's youth, their parents, and those who can coach, the East End Lacrosse Club, whose website is eastendlacrosseclub.com, may move its fall practices to East Hampton's Herrick Park.

Smith added that equipment would not be a problem. "We're not trying to make money -- we've been giving sticks out, and Chris Stewart," who formerly headed the P.A.L. lacrosse program here, "and Chris Corwin have equipment that we can give out.

"Chris Stewart is the godfather of East Hampton lacrosse," the elder Corwin said. "For more than 10 years we had kindergarten-through-sixth grade P.A.L. teams here -- until a year or two ago when Covid hit and our kids aged out. Basically, each grade had a team." His son Charlie, an Under Armour lacrosse All-American, who's a sophomore now, was a kindergartner when he started.

Corwin, who had played Division-1 lacrosse at Marist, volunteered to coach that K-1 team when no one else stepped up, and "moved on up with them."

"I'm from Nassau County where you grow up with a lacrosse stick in your hand," he continued. "Long Island, you know, is known for lacrosse. It's the sport on Long Island. That's why, when we moved out here when our kids were young, we could never figure out why interest in the game seemed to come and go in waves. Ricky's in the position I was in 10 years ago. If we can build enough interest, we'll give free clinics at Sportime in the winter, and begin to field P.A.L. teams again. We're trying to mirror what Joe McKee has done with football."