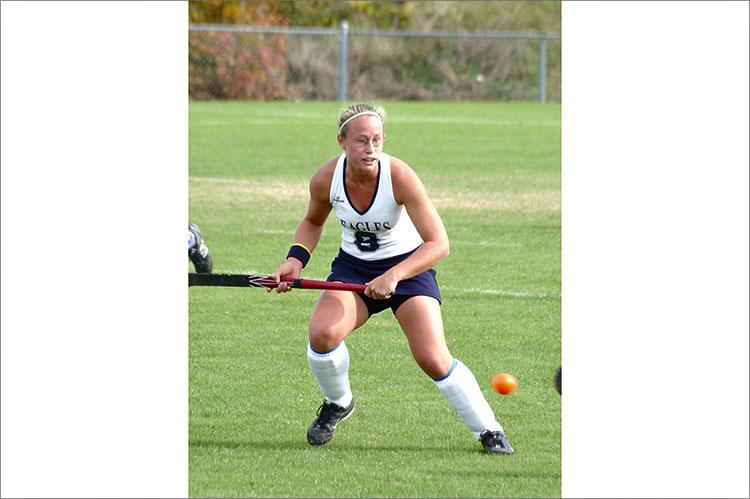 Brynn Maguire of Montauk, a two-time East Hampton High School Hall of Fame inductee, is to be inducted into the University of Mary Washington’s Hall in February.
Clint Often
By Jack Graves

Brynn Maguire, an East Hampton High School graduate who was twice named to All-America field hockey teams while at the University of Mary Washington, will be inducted into its Hall of Fame on Feb. 5.

Maguire, who played for Mary Washington between 2002 and 2005, is one of only a few East Hampton graduates who have gone on to be All-Americans in college. She was named to the second team in 2004, her junior year, and to the first team in 2005.

She told The Star she’d “jumped off the couch” on learning from joyful teammates that she’d been picked as one of D-III’s top-15, but Maguire said that reaction didn’t compare to what she felt when her former coach, Dana Hall, called recently to tell her that she is to be inducted into Mary Washington’s Hall of Fame.

“When I got the call from Coach Hall, I couldn’t believe it,” she said. “It was a nice surprise. So many great athletes have come through the university over the years. I made some lifelong friends when I was in college. We had a really tight bond. I’m in touch with a lot of them every day. We’re older now and have families, but most of them have said they’re planning on coming down for the ceremony. It will be exciting to see everybody.”

Maguire, who “got a lot better in college,” where she played as a forward and as a midfielder, said she winces whenever she sees recruiting videos of her playing field hockey in high school, especially when it comes to positioning and passing miscues that would be no-no’s in the much faster, far more demanding college game.

“In college, on a quick field, the players average six miles of running in a game.”

One of nine freshman recruits, Maguire and the Mary Washington Eagles went to the N.C.A.A. tournament in two of the four years she was there.

She is sixth on Mary Washington’s all-time points-scored list, with 46 goals and 15 assists, and is just one of three U.M.W. field hockey players to be a two-time All-American. Her plaque, moreover, says she helped the Eagles to 55 victories in four seasons, including two N.C.A.A. appearances, and was a two-time all-conference, all-region, and all-state designee.

It was Lou Reale, East Hampton High’s former softball coach, her “favorite coach of all time,” who taught her to put the good of the team ahead of individual concerns, Maguire said. “He led us through some of the best seasons East Hampton’s ever had. . . . We put in the time — some thought it was too much time, though I didn’t — and it paid off.”

The 2001 softball team for which she played center field was inducted into East Hampton High School’s Hall of Fame in 2015. Maguire herself, who is to give birth to her second child soon, was an individual inductee in 2016, the day before she and Brian Egee, a scenic artist for television shows, were married, “five years ago tomorrow.”

It had been one-for-all and all-for-one on that 2001 Bonac team, she said after reciting, without hesitation, all of her teammates’ names and their positions.

Following graduation, with a business degree, Maguire moved to New York City, where she has produced television commercials, “until last year, when the pandemic hit. . . . My career’s a little on hold at the moment . . . we’re hoping we can stay out here full time.”

With a 2-and-a-half-year-old son, Finnlay, and another child on the way “in two weeks,” she is trying to stay active, she said.

Asked if she knew any of the players on East Hampton’s present field hockey team, a number of whom display the grit that she did when she played, Maguire said she did. “I’ve known Chloe Coleman,” a dexterous junior midfielder, “from surfing at Ditch. She’s a great girl with a great attitude. I’ve always cheered her on.”

Surfing had always been a love of hers, said Maguire, who was born into a surfing family — her father, mother, and brother all being surfers.

She has played field hockey just a few times since her college days, but she will, she said, in parting, “surf forever.”