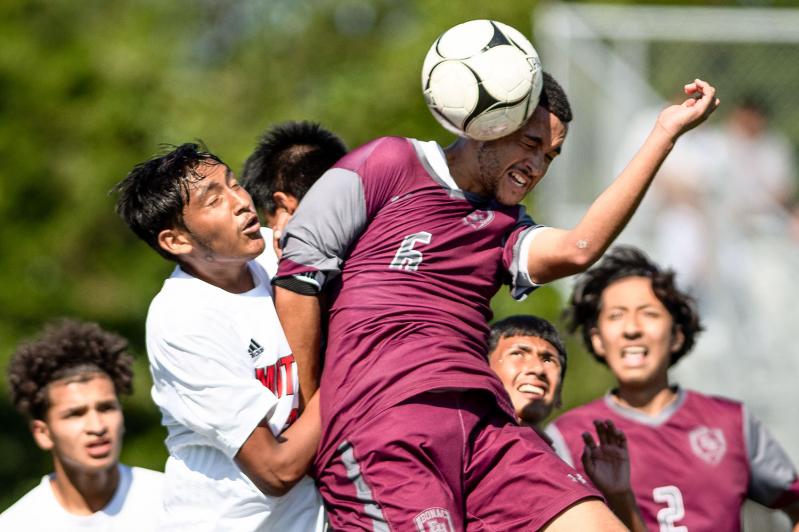 Manuel Ruiz, who wound up with a bloodied elbow, left it all on the field in Saturday’s 3-1 loss here to Amityville.
Craig Macnaughton
By Jack Graves

East Hampton High’s football team rolled to its second straight victory Saturday at Wyandanch, winning by a score of 35-12, with Charlie Corwin, its sophomore quarterback, again amassing many yards on the ground and in the air.

The boys soccer team, by contrast, suffered its first losses of the season, at the hands, as it were, of Islip on Friday and Amityville here Saturday. The talented team and its coach, Don McGovern, remain sanguine nevertheless. “We played well, especially in the second half,” McGovern said after Saturday’s 3-1 loss. “I thought we were the more dangerous team in the second half. I know Eric [Armijos] is shaking his head over the two chances he had within the 12 that went wide. But that’s soccer.”

The boys volleyball team, coached by Josh Brussell, also had a big win this week, defeating Shoreham-Wading River on Friday in four sets.

“The boys did great,” Brussell said in an email. “We had been working on defensive positioning and they really improved on that in the game. We need to clean up our offensive game, however. Many of Shoreham’s points resulted from our errors.”

Brussell started two reserves, David Caprio and Isaac Rodriguez, in the third set, and brought in the starters, Andrew Dimopoulos and Colin Villante, when East Hampton fell behind 16-7. “And we almost came back, losing by 2 points.”

As for “other positives,” Alex Lombardo, the setter, was, said Brussell, “really good at spreading the ball around instead of just having one player rack up the kills. . . . Calum Anderson had 11 kills, Andrew had nine, and Mark Daniels, our opposite, had nine as well, and our middles, Hunter Eberhart, Nick Schaefer, and Declan Bistrian, had 10 kills among them.”

“We’re getting better every game. Five teams make the playoffs this year, and I think we have a shot at getting the third or fourth seed.”

Patchogue was to have played here Tuesday, and Bay Shore is to play here today.

Back to football, Joe McKee, Bonac’s coach, said East Hampton scored on its first possession at Wyandanch, Finn Byrnes capping the 65-yard drive with a three-yard touchdown run. That opening drive was keyed, McKee said, by a 30-yard strike from Corwin to a wide receiver, Aryan Chugh.

East Hampton put the game away with a 21-0 third quarter in which Byrnes, again on a three-yard run, and with Corwin, on 67 and nine-yard rushes, broke into the end zone.

Corwin finished with 120 yards rushing on 12 carries and gained 127 yards in the air, competing five of the six passes he threw. Byrnes, who also had two touchdowns, rushed for 87 yards in 12 carries, McKee said.

The Bonackers made good on three of their five point-after attempts. On one of them, Danny Lester, who was holding for Chugh, lost the handle momentarily, but recovered in time to roll out and hit Will Darrell with a pass in the end zone, which increased East Hampton’s lead to 22-12. Wyandanch scored its second touchdown in the fourth quarter.

McKee said his team will face “a big test” when Babylon plays here Saturday at 3 p.m. “We’ll have our hands full.” That game, he added, would “give us a chance to see where we’re at.”

Judging from the huge turnouts at Herrick Park on Friday evenings for K-6 flag football, an innovation of McKee’s, the program is on the upswing.

As for the boys soccer team, which as of Monday was 3-2 in league play, and 5-2 over all, McGovern said that despite the fact his center back, Robert Rea, was sidelined by a ligament injury, the defense had been doing a good job. A flukey goal had done the Bonackers in at Islip, and had Armijos buried the two aforementioned close-in chances, things would have been different against Amityville on Saturday.

“The kids should be upset –- we had our chances to win,” said McGovern, whose team was to have played at Harborfields Tuesday, Harborfields being the team that edged it for the county Class A championship in April.

“We’ve got to move on,” the coach said in parting. “We have to get ready for the next one. They’re coming quick.”