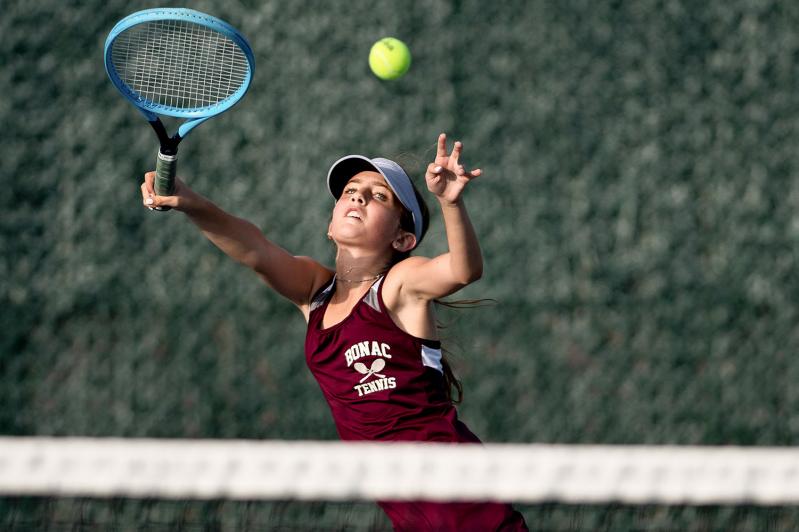 Chloe Coleman and Emma McGrory were included recently in Newsday’s Top 50 list of field hockey players, and with reason: The two led East Hampton High’s team to a spirited 2-1 comeback win here over Sayville on Sept. 21, and last Thursday the Bonackers trounced Hampton Bays 6-0, again with the two figuring prominently. Coleman is a junior and McGrory’s a sophomore; both are midfielders.

A corner play goal by Sayville three minutes into the Sept. 21 game held up through the first 36-plus minutes of action, but Arabella Kuplins, who had moved in to the right of the Golden Flashes’ cage, converted a pass she received from Coleman, tying the count midway through the first quarter. McGrory won it when, four minutes into the fourth and with East Hampton having been awarded a corner play, she worked her way around several defenders and angled into the cage a hard shot that landed with a loud thud.

Meanwhile, at the other end of the field, Sadie Cober, a junior back, continued to repel Sayville’s attacks.

“We’re so proud of you — you played so hard,” Dana Dragone, East Hampton’s coach, said to her players in the postgame huddle. The win improved Bonac to 3-2 on the season.

The news last week was good insofar as the girls cross-country and girls tennis teams were concerned too.

O’Donnell’s runners came close to bageling Islip at Sunken Meadow State Park on Sept. 21 as Dylan Cashin (one of Newsday’s Top 25), Ryleigh O’Donnell, Emma Hren, and Zion Osei took the first four places. Emma Tepan, who was preceded over the line by an Islip runner, was sixth, and rounded out the scoring for East Hampton, which won 16-45.

“Dylan’s running very well — as are all the girls,” O’Donnell said, including her ninth graders, Osei, Brianna Chavez, and Shilo McCarthy.

O’Donnell’s and Kevin Barry’s squads were scheduled to compete last weekend in the Ocean State Invitational in Rhode Island, “but we didn’t go anywhere because of the [East Hampton Village] centennial celebration — half my girls were in it,” said O’Donnell.

The boys were home against their Islip peers on the 21st, over a 2.5-mile course that loops around East Hampton High School. The visitors’ top runner, who, according to Barry, was the defending Division IV champion, won, in 13 minutes and 59 seconds, followed closely by East Hampton’s Evan Masi in 14:03. An Islip runner was third, but it was all East Hampton after that, with Brayan Rivera, Amari Gordon, and Liam Fowkes taking fourth, fifth, and sixth, and with Mikey Gilbert placing seventh for a 24-36 victory.

“It was incredible,” Barry said later, “that Evan, coming off a broken ankle, was only a few seconds behind the Islip guy.”

Barry added that “all our kids improved their times on our course since the spring, but Liam, who’s a sophomore and who’s starting to look like his older brother, Ryan, made the biggest jump, dropping a whopping 1 minute and 21 seconds.”

Kevin McConville, thinking the William Floyd girls tennis team might be very strong — it had edged Westhampton Beach 4-3, and Westhampton had blanked East Hampton 7-0 — moved his top player, Sandrine Becht, down to first doubles, hoping to take two doubles and two singles matches in those teams’ meeting on Friday, but it didn’t work out. East Hampton lost 5-2.

McConville said during a conversation Sunday afternoon that in retrospect he should have played his customary lineup, from which Bella Walsh, who has been playing at second doubles with Rachel Monaco, was missing. “I thought they might be very strong in singles,” McConville said, “but they weren’t.”

As it turned out, Maya Molin, at second singles, and the second doubles pairing of Riley Roesel and Monaco won East Hampton’s points. Becht and Lily Somers lost “in two close sets” at first doubles, and Caleigh Barletta and Samantha Pillco lost in three sets at third doubles.

Earlier last week, on Sept. 21, East Hampton’s team, said McConville, “had an exciting comeback win over Ward Melville, which came in at 5-1, having only lost to Sachem, a really good team.”

At 7-2 as of Monday, “We’ll finish within the top four definitely, and it would be nice to play Floyd again,” the coach said. “We match up better with them in singles than we do with Westhampton.”

The girls were to have played Sachem on Tuesday. Their last regular season match will be next Thursday.