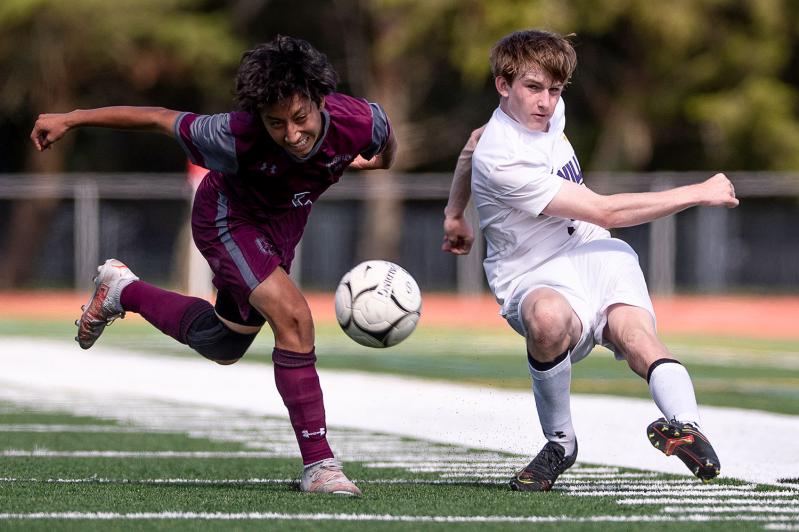 Randy Pizarro, leaning in toward the ball, and his Bonac teammates came back to beat Sayville 4-2 in a game here Saturday. Pizarro scored one of East Hampton’s goals, a 30-yarder, in the first half.
Craig Macnaughton
By Jack Graves

Sayville threatened right off the bat in Saturday’s boys soccer game here, sending a hard shot toward the right post whose rebound Josh Villaplana, East Hampton’s goalie, caught up with just before it would have been buried.

The Bonackers were to mount their share of attacks in the succeeding minutes, but the Golden Flashes were, in the 12th minute, the first to get on the scoreboard by way of a ground-hugger from about 15 yards out that followed a failed clearing attempt by East Hampton defenders.

Eric Armijos’s dash in on goal a minute later almost evened the count, but his bid zipped just over the bar.

At about the midway point in the opening period, a lofted 30-yard shot by Randy Pizarro, one of East Hampton’s midfielders, did tie it up, the ball sailing over the frozen goalie’s head and into the left corner of the nets behind him.

A questionable hands call on Manuel Ruiz, a hard-playing defender, presented the visitors with a chance to retake the lead in the 28th minute, and they did, a header that followed a free kick into the goal mouth getting by Villaplana.

Down 2-1 at the break, Don McGovern’s charges took stock, regrouped, and came out to dominate play in the second half.

It looked as if John Quizhpe, one of Bonac’s chief scoring threats, had tied the score with a 10-yard right-to-left header soon after play resumed, but he was ruled offsides.

“We didn’t think he was — he wasn’t ahead of the defenders when the ball was hit — but anyway,” East Hampton’s coach was to say later.

Villaplana was to make his best save of the game, a leaping one at point-blank range, in the 50th minute. A minute later, a Sayville shot bounced off the crossbar, but then Villaplana’s teammates really began to take charge, thanks largely to the midfielders winning struggles for 50-50 balls following goal kicks.

Armijos, out-hustling several defenders, broke through to make it 2-2 in the 58th minute; Gary Gutama, on the run, having received the ball from Armijos, made it 3-2 in the 60th, and Armijos capped the pleasing 4-2 comeback with a minute left to play.

Afterward, amid the celebrating, McGovern congratulated his team on their second half. He was proud, he said, that they had looked upon adversity as an opportunity. “That’s life,” he said. “At 2-1, you could have put your heads down and given up, but you persevered, you talked to each other, you moved together . . . it was great stuff. You deserve to give yourselves a round of applause.”

After they had done so, he said, “We’ve got a big week ahead. We’re at Rocky Point on Monday, we’ve got Amityville here on Wednesday, though that may change, and Friday we’re at Islip — boom, boom, boom. You’ve got to up your level.”