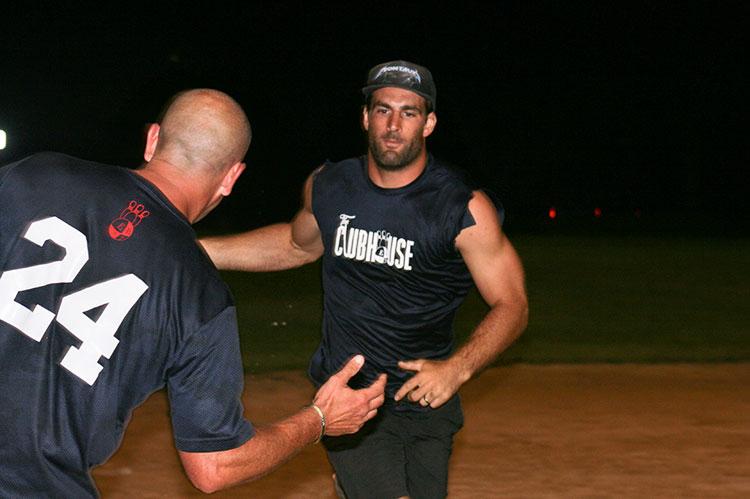 Andrew Foglia, facing the camera, drove in nine runs for the Clubhouse in a men’s slow-pitch softball game at the Terry King ball field in Amagansett on Sept. 15, but his team nevertheless lost 23-22 that night to McMahon’s.
Jack Graves
By Jack Graves

There came a time in Sept. 15’s Clubhouse-McMahon’s slow-pitch softball game when, in the bottom of the sixth inning, play was stopped for a while because all the balls were in the darkened parking lot.

The solo homer that McMahon’s leadoff hitter and shortstop, John Pizzo, had just hit, treating his defending-champion team to a 23-22 lead, was the eighth of the night, three of those taters having come off the bat of the Clubhouse’s Andrew Foglia, who finished the slugfest, during which the lead changed five times, with nine runs batted in.

The last time last year’s playoff finalists met, in early July, the Clubhouse won with relative ease. This time it was a battle royal from start to finish.

McMahon’s, the home team, took a 10-6 lead in the bottom of the second on a three-run home run by Pizzo and a two-run home run by Tom Thorsen, prompting Ray Wojtusiak, who had started on the mound and had yet to record an out in that frame, to bring in Rob Nicoletti, the league’s eldest player, to relieve him.

Nicoletti, who is in his 60s, stopped the bleeding. Jeff Sztorc, the cleanup hitter, flied out to Foglia in left, Riley McMahon popped out to Sonny Sireci at second, and after David Moss singled through the left side, Mike Sztorc’s foul off the third-base line was grabbed by Keith Steckowski.

After Keeler Otero, McMahon’s pitcher, set the Clubhouse down in order in the top of the third, a two-run homer by Maykell Guzman upped McMahon’s lead to 12-6 in the bottom half.

That lead, though, didn’t hold up for long. A three-run blast over the left-field fence by Foglia and a run-scoring single by Steckowski narrowed McMahon’s margin to 12-10 in the fourth, and after Nicoletti blanked McMahon’s in the bottom half, a two-out grand slam by Foglia that scored Frank Romeo, Joe Sullivan, and Diego Palomo ahead of him put the Clubhouse ahead 14-12.

By the time Nicoletti recorded an out in the bottom of the fifth, however, McMahon’s had sent 10 batters to the plate and was once again ahead, 20-14, with two more runs yet to cross the plate before the inning ended.

Down by eight, the Clubhouse, undaunted, came back to tie the count at 22-22 in the top of the sixth, scoring all eight runs with two outs — Sullivan, Palomo, Foglia, and Steckowski getting the r.b.i.s.

Guzman grounded out third-to-first to lead off McMahon’s sixth, after which Pizzo’s solo shot, his second home run of the night, wrested the lead back for McMahon’s and prompted the aforementioned search for yellow softballs in the dark parking lot.

Pizzo’s homer proved to be the game-winner as the Clubhouse went down scoreless in the top of the seventh. Wojtusiak, the first batter, lined out to Pat Silich at third, Sireci then flied out to left, and after Rick White lined a single up the middle, Pizzo snagged the line drive Romeo hit his way, ending the game.

The league’s playoffs were to have begun this week.