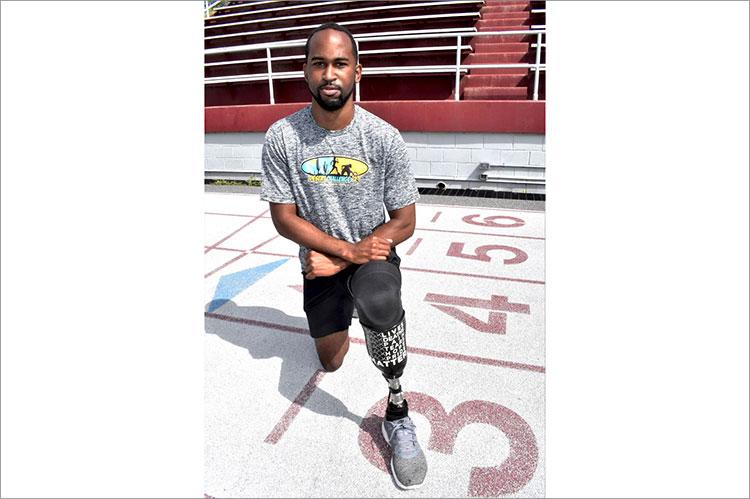 Jonathan Gore, several of whose family members live here, recently returned to his hometown of Fayetteville, W.Va., after having competed in the 100 and 200-meter finals at the Tokyo Paralympics, finishing just out of the medals in the 200.
Steve Keenan / Fayette Tribune
By Jack Graves

Jonathan Gore, whose mother’s family is from East Hampton, is taking a break at the moment from track competition, having returned recently to Fayetteville, W.Va., his hometown, from the Tokyo Paralympics, where he finished fourth in the 200-meter final for below-the-knee amputees and seventh in the 100.

Now 27, the sprinter, whose maternal grandfather, William Hopson, and two uncles, Robert and Alan, live here, had been training for the Paralympics for the past three years, beginning soon after his left heel was severed in a lawn mower accident at Appalachian Bible College in Mount Hope, W.Va.

His mother, Lee Ann Hopson-Gore, said her son was upbeat throughout the ordeal, and assented to the amputation once told by the surgeon that, with a prosthesis, his goal of Paralympics competition would be within reach.

“What Jonathan has done in three years to achieve his goal has been an incredible journey to watch, and his determination has inspired us all,” his mother said in an email.

When this writer asked during a telephone conversation this week if the severe injury hadn’t caused him to become depressed initially, Gore, who assists Mike Cox in coaching his alma mater Concord University’s track and field team and is working toward a master’s degree at Concord in health promotion, said no.

The Paralympics, he said, had been “a great experience. . . . I felt safer in Japan insofar as Covid goes than I do here.”

Gore began running in junior high school, starting out as a seventh grader in the 400 and 800, and moving the next year to the 100, 200, and 400. Throughout high school he competed in those distances, as well as in the 4-by-100 and 4-by-200 relays, adding the long jump to his repertory in his sophomore year.

Having won a track scholarship to Concord University in Athens, W.Va., a Division-II school athletically, Gore set records there in the long jump (23 feet, 5 inches indoors, and 23-6 outdoors), and was named the Mountain East Conference’s M.V.P. after winning the 200 and finishing as the runner-up in the 100 and in the long jump at the conference meet. He made the all-region team as well.

Despite challenges, it was easy for him to run again after the amputation. “It’s always been easier for me to run than to walk.”

He qualified to compete in the Paralympics at the national trials in Minneapolis, winning the 200 and placing third in the 100.

As for his seventh-place finish in the 100 final in Tokyo, Gore said he had simply not gotten up to speed quickly enough. He will emphasize speed work in the coming months, he added.

Tripping while rounding the curve at the halfway point of his 200 heat had led him to be a little too cautious at the first turn in the final. The momentary hitch resulted in a third-place finish, which nevertheless enabled him to qualify for the final, though his lane draw was not as good as it could have been.

The mishap in the qualifying heat, during which he’d momentarily been thrown off balance, had definitely preyed on his mind going into the final. “I could have done better in the final.”

No sooner had this year’s Paralympics ended than he began to set his sights on the 2024 Paralympics, and, in the nearer future, on the World Championships and the Pan-Am Games — one major competition per year.

As for long-jumping, which had been a strength of his spanning three high school and four college years, he said, “I stopped . . . not because I was tired of it, but because a special athlete I knew said I should focus on the sprints.”

He will start training again, capitalizing on what he achieved in the past year, not forgetting to work on his mind-set, at the end of this month.