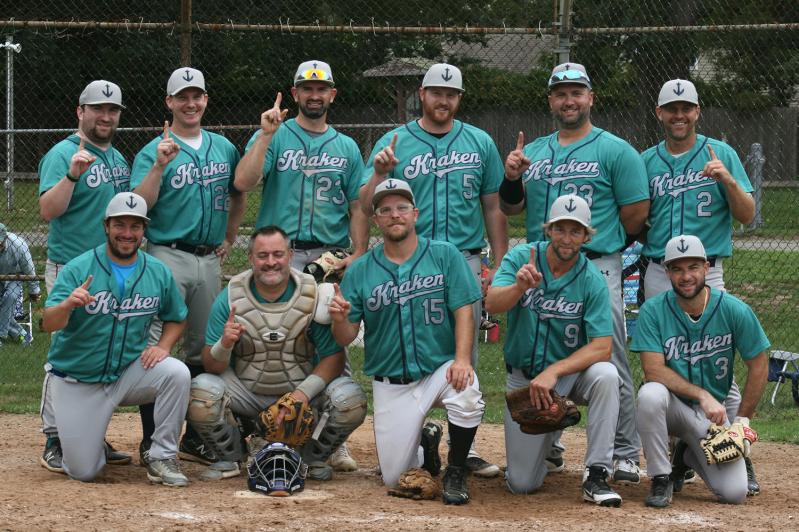 The Krakens, who on Sunday won the Hamptons Adult Hardball league's inaugural championship, count among them three East Hamptoners who figured prominently in the two-game final series sweep -- Andrew Rodriguez, the winning pitcher in games one and two, standing far left, Steve Turza, kneeling with catcher's gear on, and Scott Abran, right of Turza.
Jack Graves
By Jack Graves

The four-team league's top two had split wins in four matchups during the regular season, after which each advanced to the best-of-three final as the result of semifinal-round wins.

The first game of the final series, which was suspended on Aug. 24 with the score tied at 7-7 after seven innings of play, was picked up Sunday with the Krakens' seventh, eighth, and ninth hitters due up in the top of the eighth.

The first of that trio, Pilinko, singled, and, after he had stolen second base, Scott Abran laid down a bunt that the Giants' pitcher, Aaron Marchese, grabbed but could not convert into an out.

Following a herky-jerky double steal, Marchese struck out Steve Turza, the Krakens' catcher, after which Mike Milazzo laid down a bunt. Pilinko slid for home, but Duane Arnister, the Giants' catcher, to whom Marchese had thrown the ball, caught him with a sweeping tag before he crossed the plate.

With two outs, the leadoff hitter, Garrett Lowe, drew a walk, and so did the number-two hitter, Tom McGrath, which treated the Krakens to an 8-7 lead. A wild pitch by Marchese with Brian O'Sullivan up made it 9-7. Nick Dombkowski then fanned, ending the at-bat, but Marchese's back-to-back walks and the wild pitch were to prove costly.

Arnister, the Giants' leadoff hitter, singled to begin the bottom of the eighth, and after Marchese flied out to center field, Charlie Butler, the number-four batter, doubled to right, putting runners at second and third with one out, but Andrew Rodriguez, the Krakens' relief pitcher, struck out Zach Kirby and Derrick Simms to clinch the win.

Game two followed soon after, with A-Rod and Marchese again the mound opponents, and with the Krakens the home team.

A leadoff walk, a theft of second, and a throwing error by the shortstop, Pilinko, treated the Giants to a 1-0 lead -- a lead that thanks to Marchese's newfound command held up through the first three innings, during which he struck out five and allowed just one hit. A-Rod was almost as efficient over that span, striking out five and giving up three hits, all singles.

The Krakens tied the score at 1-1 in the bottom of the fourth. Lowe led off with a bloop single, and, with O'Sullivan up, stole second. Barylski gathered in a high fly ball off third to retire O'Sullivan, but Lowe was able to score on a subsequent error by the Giants' first baseman, Joe Moretti.

Nick Dombkowski, who had reached first base safely owing to the error, remained there as Marchese got A-Rod to fly out to right and Brennan Rack to ground out third-to-first.

A double play followed by a flyout to left field got Rodriguez out of the top of the fifth after he'd given up a walk and a single. Marchese set the Krakens down one-two-three in the bottom half, and A-Rod did the same in the Giants' sixth.

McGrath, the ninth hitter, barely beat out an infield grounder to reach first base safely in leading off the Krakens' sixth, and came off the field limping. Abran came in to run for him. Milazzo's subsequent two-strike infield single to short put men on first and second for Lowe, whom Marchese struck out with a fastball on the outside corner.

But O'Sullivan, with the count 0-2, managed to lift a ball just over the outstretched glove of Pilinko into shallow left, enabling Abran to come in from second with the Krakens' second run of the game, after which Dombkowski looked at a called third strike and Rodriguez grounded out short-to-first.

The Giants' third, fourth, and fifth hitters faced A-Rod in the top of the seventh, but he was up to the task, retiring them on a popout, a strikeout, and a groundout to win the pitchers' duel and to clinch the championship.

Turza, his catcher, "called a great game," Rodriguez said after the teams had shaken hands. "It was a 100-percent team effort -- small ball won that game." As for his pitching, "I gave it everything I had . . . anything and everything."

It was great, he added, to be able finally to play baseball out here rather than have to travel up the Island. "It's been a great season. . . . We should have a fall league, maybe with a couple more teams, in a couple of weeks."